Movie Review: THE FAULT IN OUR STARS

Don’t let the phrase “young adult novel adaptation” turn you away. There are no vampires, no districts, no dystopian universes, no magical spells, and no whiny characters. Yes, Hazel Grace Lancaster (Woodley) and Augustus “Gus” Waters (Elgort) may be teens, but they are not those annoying types that you want to slap twenty minutes into the movie. Hazel was always opposed to going to cancer support groups. She reluctantly decides to go to appease her mom (Dern) who only wants the best for her. Hazel was not supposed to live past the age of thirteen, but after some tests and experimental trials, her health improved. 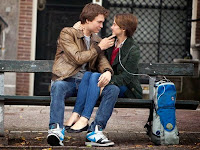 It’s a blessing in disguise for Hazel because the support group is the exact place where she meets Gus, another teenager who knows what it is like living with cancer. He is now cancer free after having his leg amputated due to battling osteosarcoma. They have pretty different outlooks on life, but a spark is ignited when he flirts with her and she is caught off guard by him. It’s hard for her to open up and be vulnerable to Gus as she thinks of herself as a grenade not wanting to hurt him in the long run. Despite her initial hesitation, their love is inevitable. Gus’ “live life to the fullest” attitude leads them on an adventure to Amsterdam so Hazel can meet the author (Dafoe) of a book she has obsessed over for years.

The Fault in Our Stars is based on the mega best-selling novel by John Green. I read the book months ago, so I went into the movie with an open mind as specific details of the book were not in the back of my head. I was able to solely take in this story as a movie without comparing the two mediums too closely. Green was involved with the production, so it should be known that the movie is an extremely faithful adaptation. Screenwriters Michael H. Weber and Scott Neustadter (The Spectacular Now, 500 Days of Summer) have perfectly captured the tone and feel of the book. Die-hard fans of the book may notice little things that got cut out, but that will always happen. For someone that has read the book, I was still completely enraptured with the story from the very first scene. I went on this heavy emotional journey even though I already knew what was going to happen.

Yes, it is widely known that this movie is a tearjerker. I hear that word tossed away so many times with many romantic stories, and I usually don’t think it will happen to me. Let it be known that I rarely cry at movies, yet The Fault in Our Stars got to me. No, not some little sniffle or a lone tear running down my right eye. I was UGLY crying. Repeatedly. One would think that after having read the book, I would make it through the movie. Wrong. Somehow when you see these two actors bring this story to life and you hear them speaking those wonderful John Greene words, it hits you all over again. As I watched their relationship, I couldn’t help but think about mine. I was brought back to when I first met my husband, our first dates, and how our relationship has evolved over the years. I think about what true love means to me and how it has shaped me as a person. While there are many sad scenes throughout, there are plenty of moments to laugh at along the way. Boone wisely knows that finding the balance in the tone is pivotal so the movie doesn’t fall into a sappy mess. You may be crying in one scene, laughing in the next, or doing a little bit of both all in one moment.

The casting for these two characters was the key to making this film work. The book has a legion of highly devoted fans that probably have images in their head about whom these two characters are and which actors should play them. The chemistry has to be dynamic as you want to believe they are truly in love. That magic was found in Shailene Woodley and Ansel Elgort, both of whom starred in Divergent as brother and sister. Don’t let that weird you out. Woodley has already made a name for herself with Divergent, The Descendants, and The Spectacular Now. Everyone will now know who Elgort is after watching him as Gus Waters. They suck you into the story of Hazel and Gus and will make you quickly forget that you are watching a movie about two teens falling in love. It’s not about teen love or cancer, but what true love is all about no matter how old you are or what you are going through. There are many on-screen couples that have chemistry but it’s rare when they leave behind a legacy. Woodley and Elgort are probably the best romantic leads since Rachel McAdams and Ryan Gosling in The Notebook. They transcend that standard idea of on-screen romantic couple to a pure and natural level. You believe that every flirt, giggle, or smile is real. It’s more than two actors repeating their lines for the umpteenth take. As you watch their relationship grow, Woodley and Elgort know how to keep these characters grounded and authentic. These characters felt very real to me which is often missing from other young adult novel characters or even teen soaps found on the CW. The rest of the cast deserves some notice as well. I always enjoy seeing Laura Dern on screen, and she does not seem to be aging at all. She brings a nice warmth and sense of humor to her supportive, happy, and loving mother. Nat Wolff is a wonderful young actor perfect as the sidekick best friend who can claim he is the catalyst for how Gus and Hazel meet.

It is clearly evident that great care was put into adapting John Green’s novel. The cast and creative team knew they making something very special and dear to many readers and succeeded at bringing Green’s story to the big screen. Naturally, I want to get my hands on all of Green’s other books as I’m sure they will get the silver screen treatment. If the film touched you in the same manner it got to me, it will sit with you for days afterward. It’s one of those movies I want to see again in the theaters as soon as possible.

Is it worth your trip to the movies? Make sure to bring a Kleenex for one of the best on-screen romances we have seen in years.