Movie Review: THE LIGHT BETWEEN OCEANS 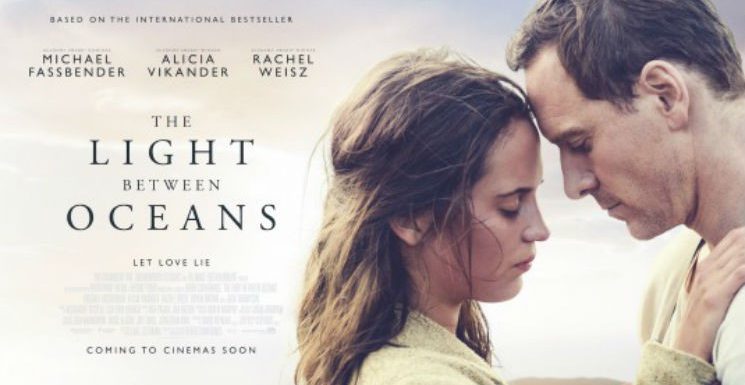 Let’s get this out of the way upfront. I have never read the 2012 M.L. Stedman bestselling novel of the same name from which the film is based. I have, however, seen two other films by Derek Cianfrance so I knew I would be in for a wallop of a heavy story. He wrote and directed Blue Valentine and The Place Beyond the Pines, both starring Ryan Gosling. No, he does not make an appearance here. The Light Between Oceans finds Tom Sherbourne (Fassbender) at a crossroads in life. He’s a World War I vet whose wife died a few years early. He is offered and accepts a six-month contract working at a lighthouse off the Australian coast. His short contract is extended into a three-year commitment. One day while visiting on the mainland, he meets Isabel (Vikander) who basically throws herself at him. She is able to get him to open up, and they begin a love letter correspondence while he is staying at the lighthouse.

They eventually marry, and she moves out to the coast to be with him. Tragedy strikes after Isabel suffers multiple miscarriages. She becomes fragile and uneasy until one day a rowboat washes ashore with a crying baby and dead man inside. Isabel believes this is a sign that they should raise the baby, while Tom is torn over not reporting it. Due to the immense love he has for her, he decides to bury the man and keep the child. A few years pass and the happy family is met with other trying situation. While on the mainland celebrating the lighthouse, they come face to face with the biological mother of their daughter. The sudden realization of the truth becomes all too much for Tom to handle.

It may be the tranquil setting of living at a lighthouse or the peaceful waters of the ocean, but I can easily picture what it would be like reading this book. Sometimes the tone of book doesn’t always translate to screen. Screenwriters need to cut scenes, characters, or slightly change the narrative to make it play better in a two hour time period. More so than other book to screen adaptations, I felt like I was going on the same journey as I would while reading the book. It has the sprawling and engaging nature of a good thick book you find yourself lost in while spending hours at a time reading it. It’s as if it’s easier to allow yourself to get sucked into a depressing book versus a weepy movie. Cianfrance beautifully brings you right into Stedman’s world and characters. He plays each scene with such raw honesty and emotion and makes ample use out of close ups to put the audience right in the thick of it.

It starts off in a quiet place with Tom adjusting to his new life. Even as his relationship with Isabel blossoms, Cianfrance doesn’t fill the scenes with an abundance of dialogue. Instead he utilizes Alexander Desplat’s elegant score to carry you along from scene to scene. Cianfrance knows he has a lot of ground to cover and tries the make the most use of his time. Tom and Isabel fall in love and get married fairly quickly which doesn’t leave a lot of time for the audience to take in their budding love before tragedy hits them. By the end, all three of the main characters end up in very different places than how we meet them. The story takes some interesting turns, as you would expect from this kind of novel. I suppose you can see some of it coming, but it doesn’t always take the easiest or safest way out. It donned on me very early on there is a lot of crying and heartbreak for all three characters who are asked to make life-altering decisions, some selfish and some for the sake of their loved ones.

Cianfrance has a way with finding the perfect cast for his films, and he has found three heavy hitters who are no doubt up for the challenge. Michael Fassbender and Alicia Vikander have wonderful chemistry together as Tom and Isabel, respectively. Their love on screen eventually turned into a relationship off screen as well. It’s a very different side of Fassbender than we’ve seen recently. He’s quiet, reserved, and guarded as Tom, which is a far cry from the brutish and forceful Steve Jobs or his slave owner in 12 Years a Slave. Vikander proves to be more than a “one hit wonder” Best Supporting Actress Oscar winner with her portrayal of Isabel. She’s flirty and full of life at first only to have it all come crashing down. She makes you empathize with Isabel even if you don’t always agree with her choices. The other Oscar winner in the film, Rachel Weisz, has the task of playing the biological mother who firmly believes that the young girl belongs back with her mother. Weisz has been laying low over the last few years but gives another dynamic performance here and reminded me just how powerful she can be when given the right material.

The Light Between Oceans is one of those heavy stories where you need to be in the right mood for it. It will inevitably have polarizing affects on its audience. Some will be turned off by the gut-punch of a sad story, while others will be transported in debating what they would do if faced with similar decisions. Oddly enough, I love a meaty drama that may be emotionally exhausting. I got swept up in the beautiful cinematography of the Australian coast, the lighthouse, and the specific attention given to nature and the environment they’re in. It’s the extra touch that pulls you even deeper into the atmosphere, the period, and the sensitive subject at hand. Even though this is my least favorite from director Derek Cianfrance, he continues to make engaging and thought provoking films even if he asks a lot out of his audience.

Is It Worth Your Trip to the Movies? Only if you’re up for it, and if so, you may need a tissue