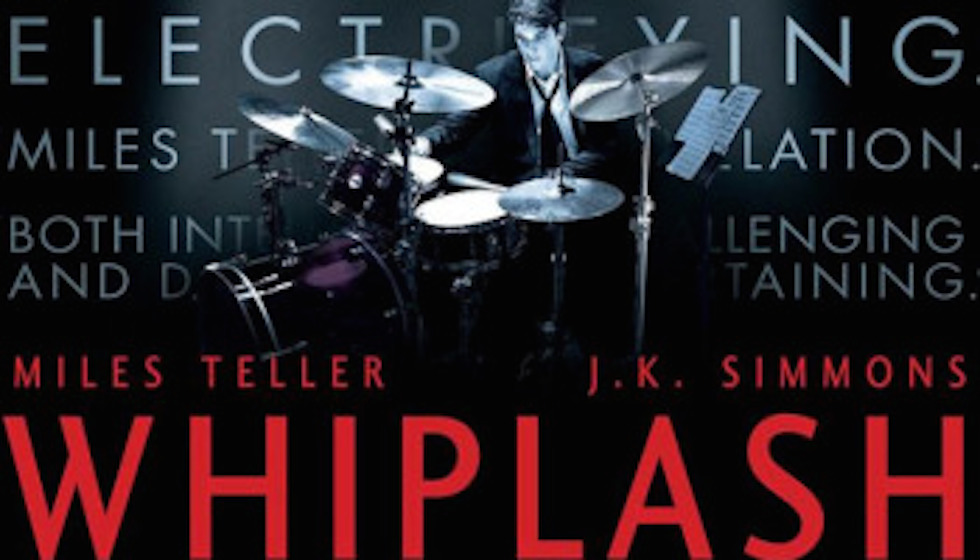 For someone that sees a plethora of movies every year, it’s always refreshing when one comes along that completely takes you by surprise. It becomes the movie that I want everyone to see. This summer it was Boyhood and now it’s Whiplash. Both films are smaller indies that will need word of mouth in order to attract a bigger audience as they aren’t dependent on the studio’s marketing budgets or big named actors to carry the weight. Miles Teller has started to make a name for himself after a mix of big budget films like That Awkward Moment and Divergent to smaller gems like The Spectacular Now. He stars as Andrew, a nineteen-year-old drums player attending Schaffer Music Conservatory. He is invited to play in the studio band led by Terence Fletcher (Simmons). Fletcher is that teacher and coach that you do not want to mess with at any point during his sessions. There is fear, but also determination to prove yourself worthy of his attention. He wears all black at all times and emulates a drill sergeant in his teaching style. The musicians all rise at attention when Fletcher enters the rehearsal room and know that they can be kicked out at any given moment.

Andrew will stop at nothing to prove himself to Fletcher. Yes, he wants to become a core member of the band, but he won’t let family or a relationship get his way of becoming one of jazz’s all-time greatest drummers. Fletcher challenges Andrew’s passion and commitment for the drums every time he picks up the sticks. There is no shortage of screaming, profanities, or chair throwing at the hands of Fletcher toward any of his students. The blood, sweat, tears and screaming matches drive Andrew further and further into a descent of madness. 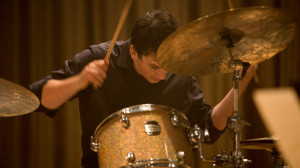 J.K. Simmons. J. K. Simmons. J.K. Simmons. You’ve seen him before in Juno, Spider-Man, and in a variety of television roles. He is someone that is long overdue for praise as he’s that character actor that consistantly does great work and receives little to no attention. His role here as Fletcher will be the one that he will be known for. His villain is comparable to that of R. Lee Emrey in Full Metal Jacket and Louise Fletcher in One Flew Over the Cuckoo’s Nest. Maybe the character was even named after her. This is the kind of character who firmly believes he is doing nothing wrong. He wants to push people passed their limits in order to achieve greatness. Writer/Director Damien Chazelle keeps his background story at a bare minimum but gives Simmons moments to show the vulnerable sides along with the sadistic sides of Fletcher. He needs to come across as a human you question instead just some monster. It’s a juicy role that many actors dream of playing. Can we just give him the Best Supporting Actor Oscar now? Going head to head with him is Miles Teller. His performance is further proof that he is a young star on the rise to greatness. You cannot deny the intensity and passion he injects into this film. There is no cheating or stunt work done.

Whiplash could have been just like any other sort of movie about jazz or a teacher and student relationship. Chazelle has precise execution in knowing when and how to play each beat of the movie. Like a good conductor, he knows that every note, every rest, and every measure counts. The musicality in his direction is spot-on and keeps the audience at the edge of their seat as the back and forth game between teacher and pupil intensifies. There are only a few scenes to let the audience breath. The cinematography from Sharone Meir is another instrument to note in Chazelle’s masterpiece. In the final sequence his camera zings around at the same tempo of the music being played by the band furthering that electric fervor inside of you. Chazelle drew from experiences he had studying the jazz drums when he was younger. He has stated that he studied and worked so hard it completely broke him and that he can’t play anymore. You have to have that specific knowledge of the subject matter to make this kind of film work and take it to the next level. You can’t do a quick study of jazz and try to fake it once filming commences.

I think it’s rare when you leave a film completely speechless because you’ve been kicked in the gut so hard. It’s that visceral reaction that happens as you sit in the movie theater chair that keeps you engaged and enraptured on what’s unfolding before you. There is a moment in the film that completely knocked me out of my chair. I’m not saying what happens or when, but you expect that shock out of a horror film, not a movie about jazz music.

Is It Worth Your Trip to the Movies? By far, one of the best movies I have seen all year.