“You got the wrong guy…I killed Dietrichson.” Those are the words of insurance salesman Walter Neff (MacMurray). Sweat pours down his face as he confesses into a Dictaphone machine directing his message to his boss, Walter Keyes (Robinson). What would a film noir be if a little murder and intrigue wasn’t involved!

Walter narrates the story as the he flashes back to how the story began. He approaches the Dietrichson residence to discuss the renewal of their car insurance policy. Mr. Dietrichson (Powers) is not home, but luckily for him his wife, Phyllis(Stanwyck), is home and is very easy on the eyes. Her perfume and ankle bracelet are just a few of her touches that leave a lasting impression. A return appointment to the Dietrichson home turns from quick renewal talk to accident protection talk. Phyllis is just so worried that something could happen to him while working in the oil fields. The cagey aspect of the situation is that she does not want her husband knowing about said policy. Walter reads into this as her confessing she wants to kill her husband. A confrontation between the two of them occurs but she denies this shocking allegation.

Days pass but Phyllis is still keen on her true motive. She lays right into his flirtation and surprises him at his home to discuss things further. “He keeps me on a leash so tight I can’t breathe.” She explains to Walter that he would never divorce her so that is out of the question. Walter cannot bear to have anything abusive happen to her, so he agrees that he will help her hill her husband. After all, he is the right man for the job. He knows all the tricks and loopholes about insurances policies and comes up with just the right way for him to die in order for her to get the most out of the policy. He informs her of the “double indemnity” clause where if someone were to have an accidental death, the insurance company would pay double to the deceased’s widow. Plus, there is money and a new romance he can get out of it.

Discrete public meetings, coded telephone calls, alibis, and calculated movements are imperative for Walter to carry out the act of causing Dietrichson’s “accidental” death. The plan, which involves some mistaken identity, is carried off without a hitch. It is only time before suspicion grows. Lola, Mr. Dietrichson’s daughter from a previous marriage, along with Keyes cannot seem to make sense of how Mr. Dietrichson died. They know it is no coincidence that an insurance claim was taken out just days before his death.

Double Indemnity is considered a classic in the film noir genre. All of the key ingredients for this stylized genre are present. The film starts off with a confession of murder and a narration follows describing the circumstances around it. Stanwyck’s blonde femme fatale seems innocent at first glance, but she is manipulative and untrustworthy. Cinematographer John F. Seitz’s use of light and shadow along with the haunting score by Miklós Rózsa play into the conspiracy and demeanor of our central characters and their plot to stay under the radar. 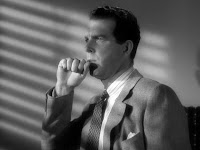 The screenplay offers many twists and curve balls to keep the pace going. The suspense and anticipation builds as the cards are turned to reveal certain truths about these characters. The film keeps you guessing until the very end as these characters cannot be taken for granted. While the audience knows that Walter is involved in the murder, the others involved in the story have no reason to suspect him. It is easy to suspect Phyllis, but why would anyone question the insurance man? Wilder directed the film and wrote the screenplay with Raymond Chandler, who later wrote The Big Sleep and Strangers on a Train. The film came early in both of their careers. You can tell by the style and sharpness of the film that this would be the beginning of the exceptional careers they would both have. Double Indemnity came before Wilder’s future hits and Oscar wins with Sunset Boulevard, The Lost Weekend, Sabrina, The Apartment, and Some Like It Hot.

The film garnered acclaim from audience and critics. It was nominated for seven Academy Awards including nominations for Stanwyck, Chandler, and two for Wilder. Unfortunately, they all went home empty handed that night losing to the Bing Crosby film, Going My Way. The American Film Institute has included the film in many of their Top Films Lists including Stanwyck at #8 on the Top Villians list, and it landed the #29 spot on the Tenth Anniversary Top 100 Films of All Time list. From the very beginning, it is clearly evident why the film has stayed a favorite throughout the last sixty-nine years. I was immediately drawn into the mystery and intrigue in the relationship between the Phyllis and Walter characters. Throughout the film, I kept wondering why he is now confessing. What is motivating him to give up this potential future he has with Phyllis? Whenever I am given the ending of the film at the beginning, I am always trying to put the pieces together throughout the rest of the movie. Double Indemnity successfully kept me guessing and gasping every time a new wrench is thrown into the mix. If you are new or unfamiliar with film noir, this is a great entry to get you started in this genre. You may just be inspired to give it multiple viewings afterwards as you will have a whole different perspective on it. There are bound to be clues Wilder left behind that you will pick up on the second or third time around. RATING: ***** (5 out of 5 stars)