It is the summer of 1969 and it is one hell of a scorcher out there. “God must have been sweating it was so hot”, proclaims Anita Chester (Gray). Sherriff Call killed so many of the African-Americans in this small Florida town that even the white people were afraid of him. That is until the day he wound up dead. She introduces all of the key players in this tale of sweat, murder, and the wrongful imprisonment of the man accused of the murder of Sherriff Call. At the time, she was the maid to Jack Jansen (Efron) and his family. His older brother Ward (McConaughey), a reporter from the Miami Times, is back in town to investigate the crime. Charlotte Bless (Kidman) is new to town and leaves Jack quite speechless and horny. Charlotte spends her time corresponding with inmates including Hillary van Wetter (Cusack) who she believes has been wrongly convicted of killing the Sheriff. By the way, they are also engaged even though they have never actually met in person. She hands over all of her letters from Hillary to Ward. Jack is more than happy to take her to the prison to spend any amount of time with her when he is not laying around the house in his tightie whities fantasizing about her.

The investigation into Hillary plays second fiddle and becomes more of a backstory and a plot device as the movie shifts focus to Jack’s relationships with Charlotte and Ward. Take this scene for instance. A day at the beach between Charlotte and Jack leads to him getting attacked by a jellyfish after a quick dip. She comes to the rescue by peeing all over his chest and face. Since this is a small town, it makes the front page of the newspaper. That is just one of many crazy absurd scenes that follow, each one topping the previous one. 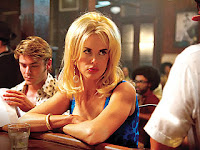 The story is so out of control and nutty that it seems like director Lee Daniels (Precious) decided to go all out on what he was going to make the actors go through to tell this story. Some of these talented actors are up for the challenge while others seem to struggle. Kidman is asked to do a variety of trashy and strange things between orgasming for Cusack in jail and peeing all over Efron. I really appreciate Efron for continuing to take on different roles in order to challenge him and distance him from his High School Musical days. I am sure it was not hard for him to stay shirtless for most of the movie or dance in the rain in his tightie whities. Do not be surprised if you think Macy Gray is one of the better actresses in the movie. She perfectly nails the Southern maid/cook attitude that comes with having to deal with too much crap in her life. Cusack plays against type but it does not seem to work in his favor as he comes across as miscast and trying way too hard to be this maniacal creep. 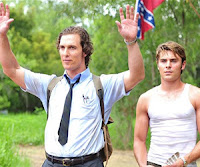 Daniels co-wrote the screenplay with Pete Dexter based off Dexter’s book of the same name. The script seems all over the place at times. I kept debating whose story was being told. It took some time before it fully settles into what Efron’s character is going through. As great as Macy Gray is, the use of her narrating the story is completely unnecessary. The film is given a grainy look as if to convey the southern, hot, and dirty feel and the camera takes full advantage of using hazy unfocused shots from time to time. The film has that sexually deviant, mysterious, Southern feel that reminded of Wild Things. I personally think that film was far more successful at being over-the-top absurd while having fun with the story. The Paperboy tries way too hard at attempting this feeling and is too unfocused and serious at times.