LAST NIGHT IN SOHO Director: Edgar WrightStarring: Thomasin McKenzie, Anya Taylor-Joy, Matt Smith, Terence Stamp, Diana Rigg Just in time for Halloween is a haunting tale of passion and dreams from moving to the big city to pursue something larger than life to the nightmares we can’t shake. Writer/director Edgar Wright’s latest film Last Night in Soho is a twisty ride. Thomasin McKenzie stars as Eloise, a budding fashion designer who sets out for London to attend the London College of Fashion. Her granny tries to warn her of the dangerous road that lies ahead, but Eloise dismisses her overprotective ways. She’s an independent, self-assured END_OF_DOCUMENT_TOKEN_TO_BE_REPLACED 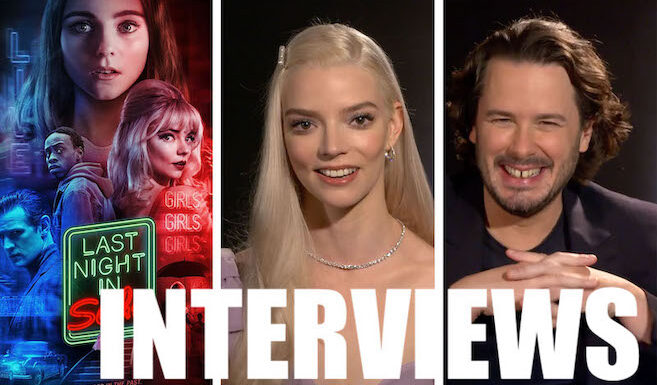 Anya Taylor-Joy Interview with Edgar Wright – LAST NIGHT IN SOHO Writer/director Edgar Wright’s (Shaun of the Dead, Baby Driver) latest film is the twisty, mind bender Last Night in Soho. I sat down with Wright and star Anya Taylor-Joy (The Queen’s Gambit) to talk about their clever new film, 1960s London, working with Dame Diana Rigg, scary movies, and Halloween traditions. I had a blast with both of them, so make sure to LIKE the video with the thumbs up button and click SUBSCRIBE for more reviews and interviews. END_OF_DOCUMENT_TOKEN_TO_BE_REPLACED

BABY DRIVER Writer/Director: Edgar Wright Starring: Ansel Elgort, Kevin Spacey, Jon Hamm, Lily James, Jamie Foxx, Jon Bernthal, Flea, Eiza González At one point, writer and director Edgar Wright was attached to direct Marvel’s Ant-Man back in 2015. If his departure from that film meant more time for Baby Driver than it’s another example of a blessing in disguise. Wright’s latest is one of the coolest and most fun times you’ll have at the theater this year. Ansel Elgort, the teen heartthrob from The Fault in Our Stars, stars in the title role as Baby. He’s a driver working under Kevin Spacey’s Doc who is END_OF_DOCUMENT_TOKEN_TO_BE_REPLACED

THE WORLD’S ENDDirector: Edgar WrightStarring: Simon Pegg, Nick Frost, Martin Freeman, Paddy Considine, Eddie Marsan, Rosamund Pike The thought of doing a pub crawl through twelve different bars having twelve pints of beer just sounds exhausting and a recipe for disaster. Yes, it sounds epic and riotous, but I am not in college anymore. I know I would be in trouble after bar number five. Maybe I am already giving myself too much credit there. For Gary King (Pegg) the thought of finishing off the Golden Mile pub crawl is exactly what he needs in life. Some twenty years ago, Gary and his friends attempted END_OF_DOCUMENT_TOKEN_TO_BE_REPLACED