The thought of doing a pub crawl through twelve different bars having twelve pints of beer just sounds exhausting and a recipe for disaster. Yes, it sounds epic and riotous, but I am not in college anymore. I know I would be in trouble after bar number five. Maybe I am already giving myself too much credit there. For Gary King (Pegg) the thought of finishing off the Golden Mile pub crawl is exactly what he needs in life. Some twenty years ago, Gary and his friends attempted to complete the Golden Mile but never made it to the final pub known as “The World’s End”.

He is bound and determined to get the gang back together and finish what they once started. Gary could not be more thrilled about this adventure, but the other guys are less than enthused. He seeks each one of them out to convince them to return to their old stomping grounds of Newton Haven to do the Golden Mile one more time. Unlike Gary, they all seem to have moved on in life. They are married, some have kids, and they have successful jobs. Gary has none of that. As Gary says to the guys, he can do whatever he wants whenever he wants. He does not have to report to anyone. He still seems to be living in the past and has not really gotten anywhere in life. He still drives the same beater car with the same mix tape in it from twenty years ago. The four friends, even sober Andy (Frost), decide to join him and they quickly realize he has not changed or grown up in the slightest. The first few pubs are not quite as Gary remembers them. They are quiet, slow, and nobody seems to remember the infamous Gary King. After a bathroom brawl with a young punk kid, Gary is shocked to find out the kid is actually a robot that spews blue ink. Like the zombies in Shaun of the Dead, these robots have taken over the town. 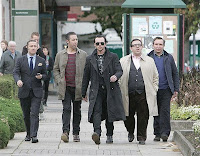 Your average moviegoer may only know Simon Pegg as Scotty from the Star Trek reboot or as one of Ethan Hunt’s partners in the last two Mission: Impossiblemovies. There is no doubt that he is fantastic in those roles, but I would urge people to seek out The Three Flavors Cornetto Trilogy consisting of 2004’s Shaun of the Dead, 2007’s Hot Fuzz and now The World’s End. These films have received a cult following for a very good reason. The script by Edgar Wright and Pegg is so chock full of witty lines, banter, and physical comedy, it is downright hysterical. Do you need to see the other two movies first? Not necessarily as there is not a continual storyline in each one. Each film stands on its own with different characters and a different plot. There are similar themes, concepts, jokes, cinematography, and casting choices that run among all three of them, hence the “trilogy”. One of those references is the subtle use of Cornetto Ice Cream found in each movie. I love that each film is a blend of genres as they add their comedic style to a zombie horror film or in this case tackling the sci-fi genre and the apocalypse. If you are a die-hard, you may even pick up the subtle references to other films of the genre as well. I would go into each of these motifs more specifically, but I would hate to get into spoiler territory.

One thing that kept sticking with me throughout was the more serious and mature tone in this one. Shaun of the Dead and Hot Fuzz are a bit more slap sticky and are goofy romps while The World’s End got a bit more serious in tone. Maybe that comes with the territory of it being the end of a trilogy. There is the continual discussion between the guys about their friendships, where they are at in life, what has changed, and how Gary has not changed. I kept thinking about the friends in my life, especially the college group. There are many I do not see anymore. We have moved to different states, taken on new interests, and our focus in life has changed. We have families, jobs, and other priorities that don’t necessarily involve Thirsty Thursday. For four years, I lived in a college town where the streets were lined bar after bar after bar. You could do any sort of crawl you could imagine. I remember some of those more adventurous nights. Some nights, I do not remember. 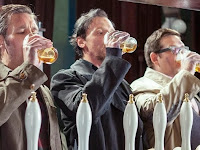 As I think back on the films I have seen this summer, and frankly all year, Edgar Wright has crafted a fine movie that gets it right in so many ways. He is sharp and detailed at crossing genres and executing each of those elements precisely. I expected the script to be one of the funniest movies of the year, and it succeeded. I cannot wait to see it again to pick up little gems and references I may have missed the first time around. Along with the comedy comes the action and sci-fi moments. The bar brawls have some of the best and most realistic fight choreography I have seen all year. These characters fight like real people not like action stars. Each of his films have these epic bar fights and I always get a kick out of them. The friendship between Wright, Pegg, and Frost is very evident throughout this trilogy and makes these films, especially this one, a bit more special and meaningful. I am sure they drew from their own lives for many of the jokes and gags. There was a continual grin on my face from ear to ear from start to finish. This was the last film I saw of the summer movie season and it ended on a high note!
RATING: **** (4 out of 5 stars)