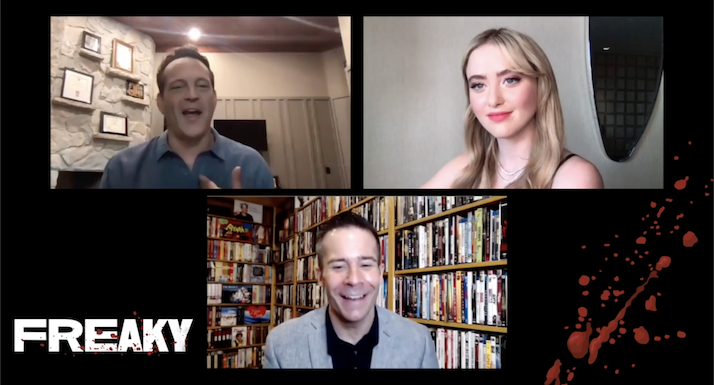 “FREAKY” Cast Interviews – Vince Vaughn and Kathryn Newton Vince Vaughn and Kathryn Newton star in the scary, yet funny, new movie Freaky from University Pictures and Blumhouse Productions. It was great talking to them about the fun of watching scary movies, visiting the Minnesota State Fair, and more! **click SUBSCRIBE for more reviews and interviews** END_OF_DOCUMENT_TOKEN_TO_BE_REPLACED

FREAKY Director: Christopher LandonStarring: Kathryn Newton, Vince Vaughn, Misha Osherovich, Celeste O’Connor, Alan Ruck, Uriah Shelton, Kate Finneran Freaky is the latest thrill ride from horror juggernaut Blumhouse Productions. There’s an urban legend floating around the halls of Blissfield High that a serial killer comes out to hunt just in time for the Homecoming dance. Kathryn Newton stars as Millie who becomes the target of the Blissfield Butcher, played by Vince Vaughn. Something strange happens after she is stabbed by his mystical dagger. On the morning of Friday the 13th, she wakes up to find that the two of them have swapped bodies. She’s in the body END_OF_DOCUMENT_TOKEN_TO_BE_REPLACED

BEN IS BACK Writer/Director: Peter HedgesStarring: Lucas Hedges, Julia Roberts, Courtney B. Vance, Kathryn Newton, Rachel Bay Jones In the new film Ben is Back, Lucas Hedges stars Ben Burns (Hedges) who suffers from drug addiction. He’s put his family through turmoil time and time again. He unexpectedly comes home for Christmas Eve much to the delight of his mother, Holly (Roberts). His stepfather, Neal (Vance), has his guard up as Ben has yet to prove himself to be in a sober and stable state of mind. Holly gives him 24 hours for him prove his sobriety and show them that he is getting better. END_OF_DOCUMENT_TOKEN_TO_BE_REPLACED

PARANORMAL ACTIVITY 4 Directors:Henry Joost, Ariel Shulman,Starring: Kathryn Newton, Matt Shively, Katie Featherston Let’s do a quick recap. A possessed Katie (Featherston) was last seen, according to video camera footage, killing her boyfriend Micah, sister Kristi, her brother-in-law, and kidnapping her nephew Hunter. Katie and Hunter have not been seen since that night in California in 2006. Paranormal Activity 4 picks up in 2011 in Nevada. A little boy named Robbie is seen walking the streets alone and hanging out by himself in neighbor’s tree houses. There seems to be some sort of family emergency with Robbie’s mom that forces him to spend some time END_OF_DOCUMENT_TOKEN_TO_BE_REPLACED