ARMY OF THE DEAD Director: Zack SnyderStarring: Dave Bautista, Ella Purnella, Omari Hardwick, Tig Notaro, Garret Dillahunt, Matthias Schweighöfer, Raúl Castillo Zack Snyder made his directorial debut with his remake of Dawn of the Dead. He’s returning to the zombie apocalypse with Army of the Dead. The opening kicks off convoy of army trucks that crash into a car. Their special cargo is tipped over and unleashes a zombie onto the roads of Las Vegas. Cut to the zombie apocalypse and the city is walled off trapping the zombies in the Las Vegas strip. The government is set to drop a nuclear bomb on the END_OF_DOCUMENT_TOKEN_TO_BE_REPLACED

NOBODY’S FOOL Writer/Director: Tyler Perry Starring: Tiffany Haddish, Tika Sumpter, Whoopi Goldberg, Omari Hardwick, Amber Riley, Missi Pyle Tyler Perry has a new movie in theaters making it his first R-rated comedy. Tiffany Haddish is on fire as wild child sister opposite the straight-laced Tika Sumpter. When Tanya (Haddish) is released from jail, she continues to cause trouble when she calls upon the Catfish crew when she believes Danica (Sumpter) is in a fake online relationship. Here’s my review. Also, click HERE for my interviews with the cast! END_OF_DOCUMENT_TOKEN_TO_BE_REPLACED 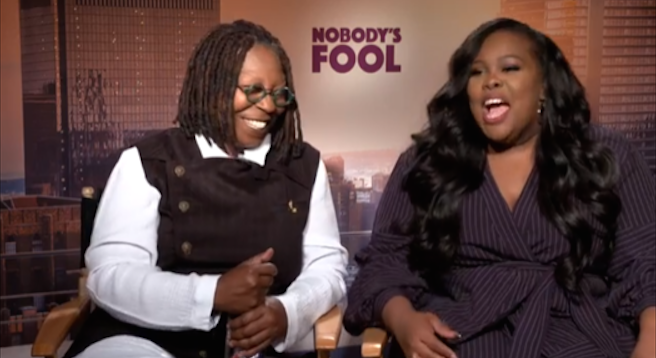 NOBODY’S FOOL – Cast Interviews I recently sat down with the cast of the hilarious new Tyler Perry new movie, Nobody’s Fool , which is now playing in theaters. This marks his first R-rated comedy, and I’m sure you can imagine the craziness when Haddish, Goldberg, and one special cameo appear in the same movie. Writer/Director/Producer Tyler Perry and Tiffany Haddish (Tanya) **SPOILER ALERT – Tyler Perry gives away a big cameo in this movie!***   EGOT Whoopi Goldberg (Lola) and Amber Riley (Callie)   Tika Sumpter (Danica) and Omari Hardwick (Frank) END_OF_DOCUMENT_TOKEN_TO_BE_REPLACED