The Giver – My Review

There’s a great scene toward the end of The Giver where Oscar winners Meryl Streep and Jeff Bridges get to have a bit of a verbal sparring match. I would have loved to have been an extra in that scene. It’s one of the more exciting scenes in the film, yet it comes far too late. Their community has become a vast, colorless world void of any feeling and emotion. Everything the citizens once knew has been erased from their memories.  There is strict order and rules set in place for everyone to abide by.  Jonas (Thwaites) and his friends Fiona (Rush) and Asher (Monaghan) are at that age where they attend the Ceremony of Growth to receive their official assignment which is part of being a member of the community. The roles are handed out by Chief Elder (Streep), who rules the community with a strict presence. Jonas is passed over and saved for last causing an alert and low rumble amongst the crowd.

Chief Elder reveals to him that he is strong in all of the attributes and therefore is given the task of being the Receiver of Memory. It is a prestigious task that comes with great danger. He is sent to The Giver (Bridges) who lives at the very edge of the community before it disappears into the area known as Elsewhere. They link arm to arm, and Jonas proceeds to learn more and more about the community’s past. When the various memories come into focus, he becomes more distraught over the present state of society. He starts to distrust his Mother (Holmes) and Father (Skarsgard) and those around him. He decides to risk everything by going where no one has succeeded before him in an attempt to restore society back to its original way of life.

The Giver is based on the award winning children’s book by Lois Lawry from 1993. I think I read it when it came out but haven’t picked it up since then. I would like to think this helped me go in with a bit more of an open mind, but it also led to more questions I have with the material and what changes were made with this adaptation. Jeff Bridges is one of the producers of the film and has wanted to get the film made for years hopping from one studio to the next. I can understand why it was now released in the wake of the success of The Hunger Games andDivergent which have similar ideas and themes. The problem is that director Phillip Noyce and beginner screenwriters Michael Mitnick and Robert B. Weide don’t have anything new and interesting to add to this story to make it stand out from those other books that actually came after this one.

The script is quite bland that leaves little for these actors to play around with in terms of their characters. Bridges and Streep fare the best and it should come without surprise that they are the highlights of the movie. As the title character, Bridges has that gruff and mysterious vibe to him that left me wondering what his true motives were with Jonas. There was a bit of mystery that surrounded him where I felt a little on edge with his scenes. With her long grey wig, Streep plays another ice queen with Chief Elder. She’s Goddess Meryl Streep so, of course, she is going to be great with this type of character where she can be menacing and evil without having to really raise her voice or scream. We’ve seen her play this type of character before, and I’ll watch her in anything.

The rest of the cast is an odd mixed bag. As Jonas, Brenton Thwaites is a fresh up-and-coming actor who we previously saw this summer in Maleficent as Prince Phillip. He has a nice boy next door appeal about him. He’s fairly young and will need to take better and more challenging roles as he grows up if he wants to be a stronger leading guy type. Katie Holmes and Alexander Skarsgard play his parents in the film. Don’t let the age difference throw you off as they are not intended to be biological parents. I must admit to having a soft spot for Holmes, but she comes off a bit monotone here. Maybe she was remembering her time of being hypnotized under the Scientology spell and applied that here as a character trait. Lastly, singer Taylor Swift has a very brief role as The Giver’s daughter. It is such a bizarre casting move that I can only assume it was because they wanted another big name to draw people into the movie. I mean, come on. When did we ever think that Taylor Swift and Meryl Streep would ever be in the same movie?

The use of color plays an important part of the world inThe Giver. It begins with the black and white of the community and color starts to materialize with Jonas’ awakening. I was reminded of the beautifulPleasantville which I need to revisit. I think the color shifting was better used in that movie. Even though there is a strict sameness to all of the houses, bikes, and the entire look of the community, there is a distinct look and shape to it without it feeling too drab or boring. The whole art direction and design elements were impressive enough to take some focus off the oddly structured script and bizarre acting. For a ninety minute movie, it felt fairly long with its slow pacing. So much of the backstory is quickly told at the beginning and then it drags out until the finally thirty minutes once Jonas sets his plan into action. Only then does it start to get interesting and pick up in tempo. The broader picture and message of Lois Lawry’s story really comes out in this part, but it takes so long to get there. Without giving too much away, I actually wanted more of an ending. I wanted more of a wrap up and a “what next”. Maybe I’m so used to these types of stories being dragged out into multiple books that I wanted a final scene or two after the resolution. This may be directly how the book ends so I shouldn’t fault the screenwriters if this is indeed a direct match to the source material. 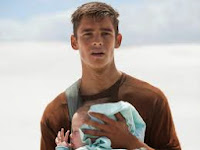 This is one of those movies where you come out perplexed as it has some good things going for it that make the movie enjoyable like Meryl and Jeff, the design elements, and a thrilling final thirty minutes. Then you think about its clunky structure and pacing, odd casting choices, and the whole idea that we have seen that kind of movie before, and it leaves you second guessing on if it’s worth your trip to the movies. In this case, I think more people will enjoy it then not.Is It Worth Your Trip to the Movies? It’s worth seeing on the big screen at matinee prices, but know that it comes with some major flaws. RATING: 3 out of 5 TICKET STUBS