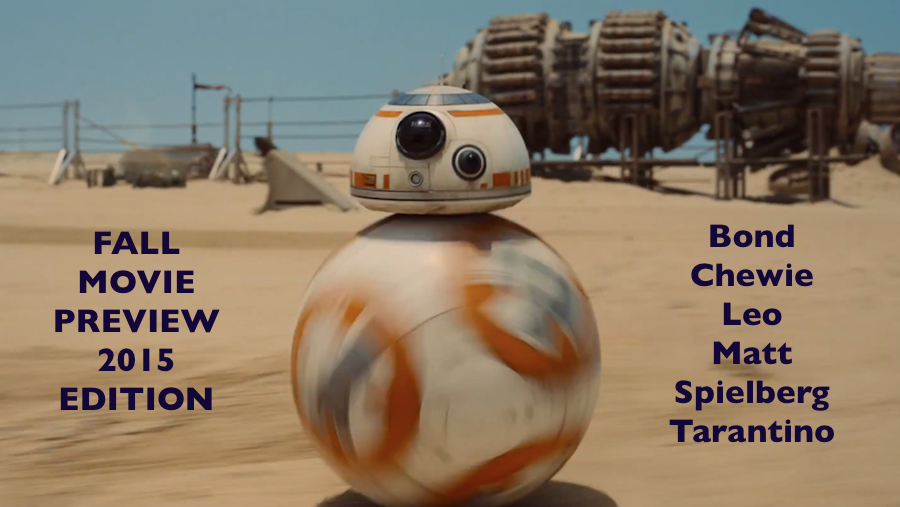 This fall season may be one of the best in recent years. It’s chock-full of exceptionally buzzy movies that I’m super excited about. We have films from big directors (Spielberg, Abrams, Mendes, Scott), promising teen/children’s movies (The Good Dinosaur, Goosebumps, The Hunger Games: Mockingjay Part 2), and of course plenty of movies looking for Oscar gold. ‘Tis the season! I had a hard time narrowing down my top ten, but here they are:

Eddie Redmayne reteams with his Les Miserables director Tom Hooper and looks to give another stellar performance as Einar Wegener who decides to live his life as woman taking on the name Lili Elbe throughout his transition. Newcomer Alicia Vikander (Ex Machina, The Man from U.N.C.L.E) plays Elbe’s wife who stayed by her side through her transition from male to female. The Danish Girl received a ten minute standing ovation at the Telluride Film Festival and will surely be the topic of conversation.

Just look at that cast list. Four actors that continue to push the boundaries and take on challenging roles. Carol is based on the Patricia Highsmith novel, “The Price of Salt”, and could garner Blanchett and Mara more Oscar nominations. Todd Haynes is no stranger to tackling stories of exploring one’s sexuality after 2002’s Far From Heaven. He seems to explore those themes again with Rooney Mara playing a young department store clerk who falls in love with Cate Blanchett’s character who happens to be married. Blanchett can do no wrong in my book.

Last year director Alejandro González Iñárritu won the Oscar for Best Director for his work on Birdman. He’s back looking for gold again with The Revenant. Leonardo DiCaprio leads a bloody revenge plot inspired by true events. He plays Hugh Glass who is left for dead after being mauled by a bear while his hunting crew (played by Tom Hardy, Domhnall Gleeson, and Will Poulter) stood by useless. Birdman‘s Oscar winning cinematographer Emmanuel “Chevo” Lubezki is back, and the chilly exteriors look to provide for a bleak, dark, and violent undertaking.

Director Danny Boyle lined up an all-star cast including: Michael Fassbender in the title role, Seth Rogen as Apple co-founder Steve Wozniak, Kate Winslet as a member of the Mac team, and Jeff Daniels as John Sculley, the CEO of Apple. The film is built around the bestselling biography by Walter Isaacson with a screenplay by the brilliant Aaron Sorkin and focuses on three different product launches. I applaud Sorkin for focusing on specific events instead giving the film a general wash over his life like many biopics.

Let’s be honest. Ridley Scott has had some duds on his hands recently. Now, he is returning to his home turf with The Martian. I feel like he really excels in the sci-fi genre after films like Alien and Blade Runner. He teams up with screenwriter Drew Goddard (The Cabin in the Woods) to adapt the bestselling book by Andy Weir. Matt Damon leads this wonderful ensemble about an astronaut who is presumed dead after a storm destroyed the rest of his team’s mission on Mars. He must fight his way to survive with minimal supplies and get word back to NASA that he is the lone survivor of his crew. It recently premiered at the Toronto International Film Festival to rave reviews claiming it to be one of Ridley Scott’s best in years.

Sometimes it can be a stretch to spend the extra couple of dollars to see a film on an IMAX screen. Everest should be that one you splurge one. If the trailer is any indication, you can bet that it will be an indescribable experience. It’s based on a true story of two different expeditions that attempt to reach the summit of Everest during one of the worst snowstorms. Director Baltasar Kormákur filmed around that location and it’s clear that he put his actors through the ringer making them do death-defying stunts. CGI was most-likely used for some of it, but Kormákur kept it as realistic as possible. Get ready to grip your seats and have your heart stop a few times.

2012’s Skyfall was one of the best Bond films of all time, and I’m relieved that director Sam Mendes and his team of writers are back again for the next Bond adventure. Mendes has opened up that this film is a bit of an origin type story with Bond having to face events from his childhood which lead him to the organization known as Spectre. The cast includes Christoph Waltz as the Bond villain and Monica Bellucci and Léa Seydoux as the Bond girls. Following in the footsteps of Adele, Paul McCartney, and Shirley Bassey, Grammy winner Sam Smith will be singing the new theme song “Writing’s on the Wall.”

Steven Spielberg looks to have another hit on his hand with the Cold War story, Bridge of Spies. This film is another collaboration with Tom Hanks, who has previously starred in three of his films (Saving Private Ryan, Catch Me If You Can, The Terminal). Hanks plays James Donovan, a Brooklyn insurance lawyer who has been tasked by the CIA to rescue a U-2 pilot detained by the Soviet Union during the Cold War. The film boasts a screenplay by Matt Charman, Ethan Coen and Joel Coen, and Spielberg’s trusty DP Janusz Kaminski is back as well. I expect it will be a tight and thrilling drama that seems perfect for Spielberg who has told many war stories before.

Quentin Tarantino has gathered a bunch of his favorite actors he’s worked with including: Samuel L. Jackson, Bruce Dern, Michael Madsen, Tim Roth, Walter Goggins, and Zoe Bell along with newbies Kurt Russell, Jennifer Jason Leigh and stuck them in a small cabin in the middle of a blizzard. What could go wrong? I’m assuming everything. Just by the look of the trailer and knowing Tarantino’s style, you can already bet on some crazy characters, blood splatter, shoot-outs, and an epic finale. The Hateful Eight will no doubt be another hit for Tarantino. Film buffs will also be excited to know it’s being presented in 70mm after being “filmed on glorious Ultra Panavision.”

It should come as no surprise that my number one anticipated movie for the fall is the newest Star Wars film. I cannot even begin to describe my giddiness toward this movie. I basically tear up whenever I see the trailer. Director JJ Abrams and producer Kathleen Kennedy seem to go back to practical effects over CGI and everything we’ve seen so far harkens back to the original trilogy. They’ve done a great job so far with the marketing by giving us little morsels of the galaxy far far away without giving away too much. Chewie, we’re home.

What do you have your eye on this fall? I’d love to hear you thoughts. Feel free to comment below.