“I met this six-year-old child, with this blank, pale, emotionless face and, the blackest eyes… the devil’s eyes.”A simple score of just a couple of notes plays as the opening credits roll.  The audience can start to feel the tension for the movie that is about the start.  Don’t let a simple score fool you.  The John Carpenter penned theme perfectly sets the mood for the opening sequence.  The camera is eye level for someone’s point of view, but we do not see who this character is.  He watches two teenagers run upstairs giggling as they are about to have sex.  We see a hand reach into a kitchen drawer and pull out a big butcher knife.  The figure continues to walk around the house and picks up a clown mask.  He puts it on and now the audience has the limited vision of our figure.  He  proceeds to stab the teenage girl numerous times as she yells, “Michael!”.  After the figure is outside and sees the parents, they lift up the mask.  It is revealed that our figure is a six year old boy named Michael Myers who has just killed his sister, Judith.  The night was October 31, 1963. 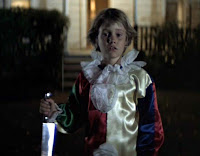 Fifteen years pass and on October 30, 1978 Dr. Sam Loomis (Pleasance) pulls up to check in on his patient, Michael Myers, at Smith’s Grove Sanitarium.  He has not spoken in these fifteen years.  This night will forever change history for our tragic characters as Michael escapes Smith’s Grove.  Dr. Loomis watches him escape but cannot catch him in time.  He knows Michael all too well and knows he is headed back to his home of Haddonfield.  Dr. Loomis tries to convince the deputies of Haddonfield that Michael is a force that cannot be taken lightly.    “You’ve got to believe me, Officer, he is coming to Haddonfield… Because I know him! I’m his doctor! You must be ready for him… If you don’t, it’s your funeral.”

The infamous Myers house has now been vacant and is on the market by Strode Realty.  The realtor’s daughter, Laurie Strode (Curtis), is our heroine.  Laurie and her friends Annie (Loomis) and Lynda (Soles) walk home after school on Halloween and discuss their evening plans.  Laurie must spend the evening babysitting little Tommy Doyle (Andrews).  Annie is babysitting across the street from the Doyle’s for Lindsay Wallace (Richards).  Lynda is the lucky one that gets to screw around with her boyfriend.  The evening starts off a little eerie for Laurie.  She is convinced she sees someone by the bushes and standing in her backyard.  Annie simply tells her she’s a “wacko”.  There is a break-in at the hardware store and Annie’s dad, Sheriff Bracket, tells the girls that it is probably a bunch of kids screwing around on Halloween night.  Laurie passes the majority of evening entertaining Tommy by carving Jack-O-Lanterns and watching scary movies on TV.  As the night progresses, Tommy is determined that he sees the Boogeyman outside.  Laurie tells him there is no such thing as the Boogeyman.  After Annie and Lynda go missing in action, she knows someone is definitely lurking around the neighborhood. 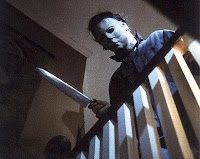 John Carpenter was a young filmmaker right out of USC film school when he made the movie.  He had his hand in every aspect of the film.  Not only did he direct the movie and compose it, he co-wrote the screenplay with his then girlfriend and producing partner Debra Hill.    They originally titled the screenplay “The Babysitter Murders”.    He said he would make the movie with an insanely small budget of $300,000 which was actually considered too small of a budget for the time.  Many actors wore their old clothing in the movie to help keep within that modest price tag.  He fashioned himself like many of his heroes like Howard Hawks and Billy Wilder, so he wanted his name above the credits to prove himself to the industry.  It was a pretty risky thing to ask from someone so young and inexperienced.  The movie originally opened to fairly bad reviews, but audiences flocked to it.  The fan base grew and grew with each week it was in theaters.

Halloween was groundbreaking for the time period and for independent movies.  It paved the way for future slasher movies like Friday the 13th, A Nightmare on Elm Street, and Scream.  Kevin Williamson wrote many references in his Scream screenplay to Halloweengoing so far as to have the characters watch the movie and the action of the movie mirror the action inHalloween.  His character Billy Loomis is named after Donald Pleasance’s character.  Seven sequels and two remakes came to follow over the years following Laurie Strode or her daughter Jamie Lloyd.  Donald Pleasance would continue to play Dr. Loomis for HalloweenII, 4, 5, and 6.  Jamie Lee Curtis would return for the sequel Halloween II as well as reviving the character 20 years later in Halloween H20 and finally killing her off in Halloween: Resurrection.  Rob Zombie wrote and directed both remakes that focused on the back story of Michael Myers and how he became a six-year-old killer.  Don’t look for Michael inHalloween III: Season of the Witch.  Carpenter and Hill wanted to tell a different type of story.  The film was widely panned and Michael was brought back for each sequel after that. 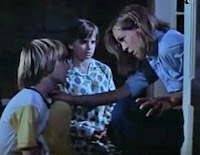 I think the movie is a perfect example of the idea where “less is more” in regards to how you go about scaring the audience.  Nick Castle, who plays Michael, moves very slowly and typically just tilts his head giving him very minimal emotion.  You do not know why he kills his sister or why he is after Laurie.  Those reasons come in the sequel.  He is just this mysterious force lurking around.  Laurie seems to be the only one that sees him throughout the beginning of the movie.  Take notice of how little blood is actually used in the movie.  Current slasher movies, including theHalloween remakes, use copious amounts of blood thinking that idea makes the movies scarier.  I disagree.  The movie is lit perfectly giving off the eeriness that is Michael Myers.  His dark presence is always felt no matter if he is in the background or in fore front of shot especially during the nighttime sequences.  Sometimes you can only see his mask or the outline of his frame.  Carpenter’s minimalist score elevates the thrills.  Between the opening theme or the slow tones used as he is approaching, it makes the movie even scarier.  The score is one of the best horror scores since Bernard Hermann’s Psycho theme.  You cannot help but think of Michael Myers whenever you hear the score. 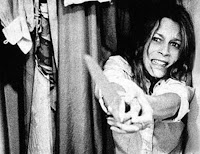 No matter how many times I have watched Halloween, it never gets old.  I am pretty sure I have watched it every Halloween season as well as numerous times throughout the year ever since I was a teenager.  Along with Hocus Pocus, it is a staple and must be watched.  I will even sit down and watch the many sequels.  There have been numerous behind-the-scenes retrospectives made over the years when the 20th, 25th, and 30th anniversaries happened.  I have seen all of those as well.  The movie was restored and shown in theaters again for one night only on October 30, 2012.  It was great to finally see it on the big screen for the first time.  There were little touches that I hadn’t picked up on before.  I was still a little tense during moments despite knowing every line of dialogue and knowing exactly when and how the kills happen.  Laurie: Was it the boogeyman?
Dr. Sam Loomis: As a matter of fact, it was.2013 Updates regarding the 35th Anniversary Blu-Ray release:-All new HD transfer supervised and approved by cinematographer Dean Cundey. The picture quality looks better than ever. I am so used it looking a bit grainy, so it is quite stunning in its HD state.-Brand New Audio Commentary from John Carpenter and Jamie Lee Curtis. Curtis and Carpenter go into quite lengthy detail about a lot of the filming process. Fans will get a kick out of the them discussing how they shot the whole beginning sequence. Curtis seems to remember so many minute details and Carpenter can really only remember the bigger aspects or things specifically related to his involvement.-The Night She Came Home!! documentary follows Jamie Lee Curtis and other cast members as they attend a Horror Hound Halloween convention. Curtis never attends conventions but agreed to do this one as all proceeds went to Children’s Hospital Los Angeles.-On Location: 25 years Later is a behind the scenes look at the making of the film and the shooting locations of many of the infamous scenes. John Carpenter and Debra Hill wanted a very natural realistic feel to the neighbor so everything was shot in real neighborhoods. Actress P.J. Soles (Linda) goes to back to these original filming locations to see what the houses, store fronts, and neighborhood look like today.-TV Version Spots: scenes only used in the televised version of the movie. One of them is an extensive scene of Sam Loomis at Smith’s Grove Penitentiary, visiting Michael in his room, and seeing the destruction Michael had on the hospital.-Trailer, TV & Radio SpotsRATING: ***** (5 out of 5 stars)