Much like the original Halloween II, the story picks up the same night as the first film. Michael Myers’ (Mane) reign of terror was unleashed onto Haddonfield on Halloween night. Laurie Strode (Taylor-Compton), Annie Brackett (Harris), and Dr. Loomis (McDowell) have all survived and are being taken to the hospital. Michael escapes the ambulance escorting him and has a vision of his mother dressed in all white with a white horse standing next to her. It is not long before he makes his way to the hospital to find Laurie.

One year passes and Laurie continues having nightmares about Michael and the events of that night. She currently lives with Annie and her dad Sheriff Brackett (Dourif). Dr. Loomis is now a best-selling author leading talks, discussions, and book signings all on the tragic life and effects of Michael Myers. He has become a cocky arrogant prick. It is very evident that he is now using the Laurie Strode tragedy as a way to boost book sales and not as a lesson on psychology and mental illness. Laurie finally learns the truth about her past after reading a passage in his new book.

One of the biggest problems with this sequel comes down to the character development. Zombie has stated his wanted this characters to go through change after the events of the first one. Why did Zombie’s “change” have to make them so awful? The audience should feel and care about the two leading characters of Laurie Strode and Dr. Loomis. How is that possible when they both have become such despicable characters? I did not like Scout Taylor-Compton’s portrayal as Laurie in the first movie, and it gets even worse in this one. I think it was wise to have Laurie severely disturbed and mentally unstable as that seems quite normal for someone in this position, but I just do not care about Compton’s Laurie. McDowell’s Loomis is now left as an awful human being who does not seem to care about how exploitative he is being. There is no redeeming quality about him anymore. I personally think that Donald Pleasence would be appalled at the direction they’ve taken this character in. Who is to blame? Zombie? McDowell? Danielle Harris and Brad Dourif are both back again this time as Annie and Sheriff Brackett. You may notice pre-Oscar Octavia Spencer as one of the nurses in the opening sequence. Margo Kidder makes an all too brief appearance stars as Laurie’s therapist Dr. Barbara Collier. Chase Wright Vanek now plays Young Michael Myers in the flashback moments. Apparently original actor Daeg Faerch grew too much in between each movie and it was too noticeable for the scenes they needed for the flashbacks.

I saw the film when it first came out in theaters and hated it. I thought with some time and a better appreciation of the Zombie remake, I may come to an understanding with this sequel remake. I still stand by all of my original thoughts and views. The whole movie is an all-around mess. I am not even sure where it wants to go or what story it is trying to tell. What was the point in making this sequel outside of the Zombie fan base wanting another? Many of the kills are random and pointless. I felt like Zombie did not know what to do with Michael most of the time, so he is just killing these random people that no one really even cares about. I suppose you could say that about the majority of the films in the franchise. At one point, Michael slowly saws off a guy’s neck with his knife. It just felt gratuitous and unnecessary. We also hear Michael for the first time as he is grunting and moaning during each of his kills. I prefer the silent killer Michael used to be. We also have the bizarre Young Michael/Michael’s mother/white horse aspect to the mythology. Was this Zombie’s way of giving his wife more to do in the sequel? 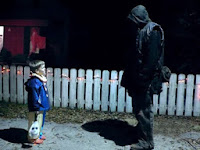 I grew to have an understanding and appreciation of Zombie’s remake of the first Halloween. I understood more of his choices, concepts, and ideas behind it. I wish I could say the same about this one. It received a terrible response from the critics as well as the audience base. Halloween: Resurrection sure killed off the series the first time around. Unfortunatley, Rob Zombie’s Halloween II has killed it off again. There were talks of a Halloween 3D that was completely different and without the involvement of Zombie, but it never went into production. Part of me wants another film in the franchise just to end it on a high note, but that could also lead to more sequels and more unnecessary films in this franchise.RATING: 1/2* ( .5 out of 5 stars)My Ranking of the Franchise1. HALLOWEEN (1978)2. HALLOWEEN H20: 20 YEARS LATER (1998)3. HALLOWEEN II (1981)4. HALLOWEEN (2007)5. HALLOWEEN 5: THE REVENGE OF MICHAEL MYERS (1989)6. HALLOWEEN 4: THE RETURN OF MICHAEL MYERS (1988)7. HALLOWEEN III: SEASON OF THE WITCH (1982)8. HALLOWEEN: RESURRECTION (2002)9. HALLOWEEN: THE CURSE OF MICHAEL MYERS (1995)10. HALLOWEEN II (2009)