Michael Myers and his niece Jamie Lloyd (now played by J.C. Brandy) have disappeared after the events that ended the fifth film. She has been captured and impregnated by the Man in the Black and is being kept underground in his cultish layer. After giving birth, the baby is marked with the Thorn symbol that Michael and the Man in Black had on them. She is able to escape with her baby, and calls in to the radio station to get word out that Michael is still around. A retired Dr. Loomis (Pleasence) and Tommy Doyle (now played by Paul Rudd) hear her plea and know he is still out there. Tommy was the child Laurie Strode was babysitting in the first one. He is now living in a boarding house in Haddonfield and is obsessed with finding Michael. His bedroom walls are covered in newspaper clippings relating to all things about Michael’s reign of terror. Michael kills Jamie once and for all but her baby was kept hidden.

Relatives of Laurie are now living in the old Myers house. Dr. Loomis heads back to Haddonfield to warn the Strodes that he may be back looking for the baby. The eldest daughter Kara (Hagan) is now living back at the house with her parents and six year old son Danny. Danny seems to have a sixth sense about Michael and the curse of Thorn. Tommy informs Kara about the history of the Myers house and how he believes Michael’s spree of terror is all linked to the curse of Thorn, which is why he is back again tonight.

How does the Strode family not know the history of the house? Kara’s dad seems to be the only one who knows as his brother was Laurie’s dad who sold him the house, but none of the rest of the family are aware of the history. They all live in the Myers house and are relative of Laurie Strode, yet no neighbor or someone from the Haddonfield community never made reference to those tragic events all these years ago. I find that hard to believe.

The film delves deep into the history of the curse of Thorn and gives more insight into how the Man in Black is involved. We got introduced to this concept in the fifth film, but it was never fully explained. I understand the idea of taking the story in a new direction to keep the franchise going, but I have never been a fan of the Thorn/Man in Black/cult aspect to the history of Michael Myers.

The film brings back some familiar faces and characters. George P. Wilbur who played Michael in the fourth film is back to play him again. He is the only actor to play him twice which is unfortunate as he is also my least favorite actor to play him. This film also marks the last appearance of Donald Pleasence as Dr. Sam Loomis. He died shortly after principal photography wrapped. Even though the credits state “Introducing Paul Stephen Rudd”, this was his second movie he appeared in. Clueless was released earlier in 1995. He takes over the role of Tommy Doyle who was played Brian Andrews in the original movie. Danielle Harris decided to turn down the chance to appear as Jamie Lloyd again. Apparently, there was a money dispute. 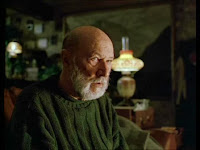 The film is just a mess overall. It is widely known that there are various versions of the movie floating around. Most notable is a “Producer’s Cut” that is quite different than the theatrical cut and includes an alternate ending. That version is not available commercially, but recently there was a screening of it held in Los Angeles that received a positive response. I would love to see it some day, so I hope it gets a blu-ray release. I originally regarded Halloween III: Season of the Witchas the worst of the the series, but even Paul Rudd can’t save this dreck.RATING: * (1 out of 5 stars)My Ranking of the Franchise1. HALLOWEEN (1978)2. HALLOWEEN II (1981)3. HALLOWEEN 5: THE REVENGE OF MICHAEL MYERS (1989)4. HALLOWEEN 4: THE RETURN OF MICHAEL MYERS (1988)5. HALLOWEEN III: SEASON OF THE WITCH (1982)6. HALLOWEEN: THE CURSE OF MICHAEL MYERS (1995)