Not since Steven Spielberg’s Schindler’s List has a film so vividly captured a horrifying chapter in history. Steve McQueen’s (Shame, Hunger) latest film is an adaptation of the memoir of the same name by Solomon Northup. In 1841, Solomon (Ejiofor) was a free black man with a wife and two children. Being an accomplished violinist, he is targeted by two men (Scoot McNairy and Taran Killam) posing as artists offering him a chance to be a part of a touring music gig. He is bound and kidnapped after he passes out after a night of heavy libations. 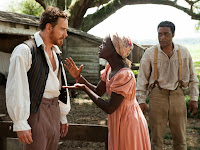 He is sold into slavery and given the new name “Platt”. For twelve years, he is sold off to various plantations. His first owner, William Ford (Cumberbatch) is a preacher and seems to treat him a bit better than future owner Edwin Epps (Fassbender). Solomon and fellow slave Patsey (Nyong’o) spend the majority of their time under the cruel and vicious hands of Epps and his mistress (Paulson). He holds onto enough hope that someday he will be rescued.

The film is getting a lot of buzz about how brutal the depiction of slavery is. I have even read some articles stating that movies goers, even members of the Academy, are walking out or cannot take too much of it due to the violence and graphic nature. I would like to know what these people were expecting. A light walk in the park? This is a tragic period of American history and I applaud director Steve McQueen for going all in by depicting the violence, hatred, and brutality that went into it. I do not feel like we see enough directors that are willing to tackle such dark and horrific moments in history. If they do, they end up sugar coating the truth or adding in some sort of love story or fictitious subplot to lighten the tone.

The story gets right into the nitty gritty early on as Solomon is sold into slavery within the first fifteen minutes. For the next two hours, you may feel a tight wad of anxiety and intensity inside of you as it never lets up. It compels you to watch Solomon’s journey that hopefully challenges you as an individual and demands your attention. There are numerous moments where I could hear the others around me squirm and writhe in their seats.

McQueen has assembled a big cast of heavy hitters, many of whom have very small parts. Pitt and Cumberbatch appear for about fifteen minutes or so. Paul Giamatti, Alfre Woodard, and Bryan Batt are all on screen for about five minutes each. Paul Dano gives another strong performance this year after his turn in Prisoners. Fassbender’s character is truly heinous in every possible way. There are very few redeeming qualities about him. At times I wanted more out of him than just a monster. As Patsey, Nyong’o is a revelation who is vulnerable and heartbreaking in every way. I expect an Oscar nomination to come her way. We now come to Chiwetel Ejiofor who is the heart and core of this film. He carries so much weight and determination in his eyes the whole film. You just look into his eyes and see layers behind them. You never see Solomon give up. Ejiofor conveys so much emotion and range without it being a flashy or showy performance. The simple yet effective cinematography by frequent McQueen collaborator Sean Bobbitt oftentimes is a still shot focusing on Ejiofor hoping, praying, and waiting for help to come his way. In so many movies these days, the camera is zipping by so fast that it can be hard to keep up. The exact opposite is happening here it where keeping the camera still gets these images and actions ingrained in your head.

How do you walk away saying this is great film when it is about such horrific events? You are not left with that feel good type feeling like you do after say The Way Way Back. Instead, you are left with this pit in your stomach. You have to go back and judge it off how well did McQueen do his job as a storyteller. Did it affect you in another way? Did it teach you something? Does it leave you in deep discussion afterwards? Did it shake something inside of you? McQueen has created a film that is sure to be talked about for quite some time. There are certain scenes and images that I cannot stop thinking about that I would love to discuss here, but it is better to just experience them firsthand without me spoiling them.