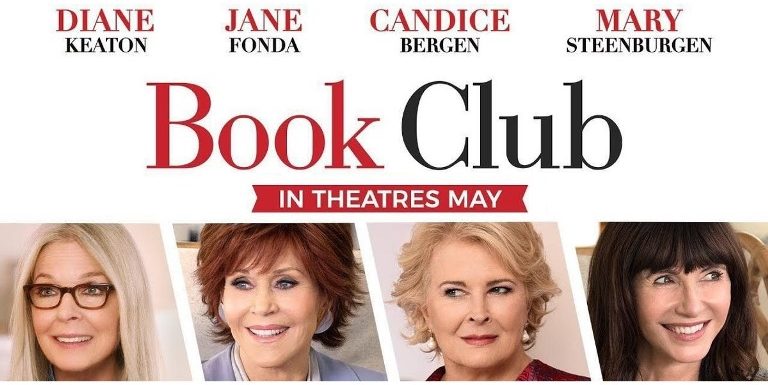 I’m presently in a book club with a few of my gal pals. It started off with us reading young adult fiction, but we’ve progressed into slightly heavier fare. I hope that in forty years we’re still reading and drinking champagne much like the characters in Book Club. The opening montage calls us back to the younger days of Diane (Keaton), Vivian (Fonda), Sharon (Bergen), and Carol (Steenburgen) as college friends. It’s a reminder of how iconic and legendary these four actresses are and a testament for the decades they’ve been steadily working in Hollywood. Cut to present day and Vivian is the carefree owner of a fancy hotel. Sharon is a high-powered judge living the single life. Diane is recently widowed, and Carol has been married thirty years to her reliable husband, Bruce (Nelson). Vivian is the only one with an active sex life, which then reveals what’s plaguing Carol’s marriage.

The women each take turns picking out their next book, and Vivian picks the salacious Fifty Shades of Grey by EL James as their next selection. Sharon’s no bullshit attitude comes through, as she’s less than enthused with Vivian’s pick. She and Diane scoff at such frivolous trash, while Carol decides this book may just be the spark to reignite her sex life. The less than stellar writing certainly has its surprising effects on all four women, each approaching sex or relationships with a different lens. Whether it’s an old flame, played by Don Johnson, or Andy Garcia’s sexy pilot, a few new men enter their lives giving the women an excuse to step outside their comfort zones in more ways than one. It’s worth noting that Wallace Shawn and Richard Dreyfuss pop up as potential dates for Sharon after she joins the online dating site Bumble.

Before you start rolling your eyes, Book Club is not some kitschy Fifty Shades rip off type movie with these actors reenacting parts of the book. That doesn’t happen. The book is merely a catalyst for guiding these characters to a new outlook on aging, starting over, and enjoying life when society has thrown them to the waste side. As Vivian states, “This book is a wake up call. Sex should not be taken off the table.” The script by director Bill Holderman and Erin Simms gives each of our leading ladies an honest exploration many people their age face in this chapter of their life. None of these actresses had worked together despite their lengthy careers, and it’s quite fun to see Fonda, Keaton, Steenburgen, and Bergen together in the ensemble scenes. Their chemistry together is incredibly rich as if they’ve been life long friends. Instead, they’re actresses who have admired each other for years bantering together, sharing stories from the old days.

The characters feel tailor-made for each actress. Candice Bergen gets to be feisty, while Jane Fonda gets to be the natural free spirit of the group. Bergen is downright hilarious as she stumbles through online dating as a seventy year old. Diane Keaton gets to reteam with her Godfather Part III co-star Andy Garcia. She’s so perfect with physical comedy, and their initial scenes together are a stitch as two fumbling lovebirds would be. Her new flame doesn’t sit well with her daughters who feel like she’s moving on too soon. Mary Steenburgen and Craig T. Nelson previously played a married couple in The Proposal so they naturally bring history, partnership, and believability to their characters who are facing a drought in their sex life along with the communication issues that arise from that.

It’s refreshing to see an adult rom-com that focuses on an older demographic. It feels even rarer in this genre to see well-developed characters who come with their own share of issues and stakes at hand. I’m so used to the teenybopper romances or the saccharine Nicholas Spark-style weepers that are beyond predictable. Book Club is admirably smarter than expected and a welcome movie for generations of moviegoers looking for films that represent their struggles. These women stand up for themselves about what they want in their seventies and aren’t afraid to fully give in when it feels right. The film tackles serious issues, but Holderman knows how to resolve it with a hysterical approach that never cheapens what came before. There are plenty of cheeky innuendos and sexual proclamations oftentimes given with sheer perfection by Candice Bergen. It’s pure joy to finally have Bergen, Fonda, Keaton, and Steenburgen together in the same movie. They have four Oscars and five Emmys between them, and it’s a pleasure to see them play off each other. Book Club is far more than a chick flick, rom-com or other clichéd term. Hopefully if this does all well at the box office, we will be treated to more films like this.

Fore more on Book Club, check out my interviews with the cast over on my You Tube channel.

Is It Worth Your Trip to the Movies? Grab a glass of wine as you’ll want to join this book club.