So what happens when two iconic Emmy winning actors from two of my favorite television shows do a movie together? They prove, yet again, that they are more than just Tony Soprano and Elaine Benes. Julia Louis-Dreyfus plays Eva, a divorced single mother working as a masseuse and looking for more in life. Her daughter is heading off to college soon, and she is determined to soak in as much mother-daughter time as she can. She attends a party with her friends Sarah (Collette) and Will (Falcone) and awkwardly mingles with the other guests and passes out her business cards hoping for new clients. She meets Marianne (Keener), an earthy hipster poet that actually calls her back for an appointment. Eva is quite impressed as most people just take her card to be nice and never use it. They form a quick bond over being divorcees with daughters. Marianne has the gorgeous home and lifestyle Eva wishes she had. Their massage sessions turn a bit therapeutic and personal for Marianne as she continually opens up about her awful ex-husband.

At the same party, Eva is introduced to Albert (Gandolfini), another divorcee whose daughter is college bound. He is sweet, tender, funny, and the sparks ignite between the two of them. They may seem like an unlikely pair, but as they continue to see each other, they realize they may just be what each other needs in life. Eva’s new found friendship in Marianne and romance with Albert is put to the test as she puts the pieces together that her new boyfriend is the awful ex-husband Marianne keeps nagging about in their sessions. 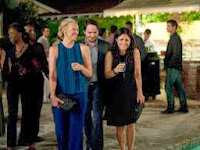 Of course there has to be some sort of snag. That’s what makes this movie all the more realistic. Life always has to throw in those curve balls right when you think it is on the up and up. Director/writer Nicole Holofcener has created a mature smart romantic dramedy that feels far more accurate and true to life than many of those sophomoric and idiotic rom-coms that clutter the theaters. Take the first date between Albert and Eva as an example; it has that first date feel full of awkward moments, interesting dialogue, and some funny banter. There are these road blocks and personality traits that test the compatibility of the couple that ring very true to life. I feel like we do not see enough of these types of stories where the characters are set in their ways but are trying to find love again. There is an interesting commentary on divorce and how one person’s personality traits and ticks may bother one person but another person may find them redeeming. The character of Marianne is so adamant in her thoughts about Albert, but that doesn’t mean he is a terrible person or that it is wrong for Eva to be attracted to him.

Julia Louis-Dreyfus primarily works on the small screen, so it is such a treat to see her take on this character. I wish she would take on more film work in between her seasons of HBO’s “Veep”. She is truly one of the best comediennes working today. This is more of a dramatic role than say Elaine Benes, Christine Campbell, or Selina Meyer. Have no fear as she still infuses the role with her style of comedy by finding the humor in those awkward moments that she is so perfect at delivering. She has that infectious laughter that is always so believable. The chemistry between her and Gandolfini works so well, that I often wondered if she was laughing as the character or laughing at Gandolfini working his magic and charm. Maybe a little of both. It is such a shame that Gandolfini is no longer with us. He was so unbelievably talented. To many people he will always be known as Tony Soprano. Enough Said was a great platform for him to show off just how great he was at playing someone that showed off his warm and gentle side, which often goes unnoticed.

Enough Said is a gem of a movie that has gained a small audience but deserves much more. This is one of those movies that could get lost in the shuffle, but to see these two actors work so well together is such a treat. Plus, they are joined by Toni Collette and Catherine Keener who are delightful as always. If you want a romantic comedy that you can actually relate to and understand where these characters are coming from, do try to catch the latest from indie director Nicole Holofcener.RATING: **** (4 out of 5 stars)