Be ready to be blown away by one of the best movies you will see all year. Dr. Ryan Stone (Bullock) and experienced astronaut Matt Kowalski (Clooney) are doing their routine checks aboard their space shuttle floating around space like it is no big deal. It’s all just part of their job. After seeing Gravity, that is a job I never ever want. I can barely climb up a ladder without my fear of falling kicking in. They receive communication from their command station (Ed Harris!) that a chain reaction of debris is heading their way, and they must abort their mission.

There was no way of preventing it as the debris collides with the shuttle. Communication has been lost, the shuttle has been destroyed, and Dr. Stone and Kowalski are left tethered together floating in the abyss of space. They are the lone survivors of their crew now facing the eternal idea that they may never see home again. Their only hope lies in the International Space Station if they can successfully navigate themselves over to it. 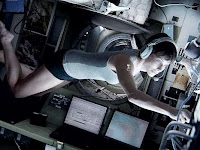 I first became aware of director Alfonso Cuarón over a decade ago. I rented his 2001 hit Y Tu Mamá Tambiénand loved it. That was not his first film, but it was the one that got me hooked to him as a filmmaker. He upped the ante with Harry Potter and the Prisoner of Azkaban by proving those films could be more than just fun movies for kids. This is his first film since 2006’sChildren of Men. I would say that if it takes him this long in between projects, but the end result is Gravity, I respect that time. Not only does he direct the film, but he wrote the intelligent screenplay with his son, Jonas Cuarón. You may be surprised, yet relieved, to hear there is a sense of humor that comes with some of the dialogue. The film is so intense and anxiety ridden that you need those moments of humor to balance that tense state of being. I do not want to give too much away about the characters and their state of mind throughout this, but the script allows them to have the appropriate reactions and emotional sense regarding the situation they are in. Once you see it, you will understand what I am talking about. It does not get bogged down in a “woe is me” type tone.

Throughout the film, I realized how casting these two leads was vital in making this movie work. You need two powerhouse actors, especially the one playing Dr. Stone, that not only can carry a movie but make it stay interesting, edge of your seat, and captivating for ninety minutes. These survival stories can go south quickly if left in the wrong hands. Clooney and Bullock are exactly the kind of actors the film needed to make the tone work. These are two very smart actors that know how to stay in control of every scene and know exactly what is needed to keep the film moving. Bullock is given a small but vital back story, and in turn, delivers a powerful performance that will most likely garner another Best Actress nomination. She brings a maternal warmth and sense of humor that help elevate this story and make it a personal journey instead of just some movie about two astronauts in space.

EVERYTHING about this film is breathtaking and magical. Between the visual effects, cinematography, and sound design, I never once felt like I was watching these two actors act against a green screen. I never worried and wondered about what contraption they were wearing to capture and create the special effects. This is a crowning achievement in film making that captures what going to the movies is all about. Cuarón has given the audience the ability to go outside of themselves to go to a place beyond our everyday life. I am the kind of film buff that loves the special features and behind the scenes documentaries. I want to get in on that process and learn all about what it takes to bring the stories I love to life to the big screen. Gravity is a different story. At this time after my first viewing, I do not want to know. I do not want to lose that magical place I was sent to for ninety minutes. I do not want to know about the technicalities that went in to making this film happen. I do not want to know how they were able to make Clooney and Bullock appear to spend the entire film in zero gravity.

Like 2001: A Space Odyssey some forty-five years ago, Gravity is one of the best achievements in the sci-fi genre. I would hope that it will be remembered as one of the greats. It may inspire young kids who envision themselves to be the next great filmmaker or it may inspire a new love of space and the vast universe we cannot begin to comprehend. It is one of those cinematic adventures that is best left to experience yourself as any review will simply not do it justice. You may be skeptical about 3D (I hear you on that one!), but rest assured here. Films like Gravity are the kind that 3D is meant for over some action flick converted in post-production. It is not some gimmicky ploy to rob the audience of an extra $3. It sucks you into the world and enhances that feeling of getting lost in space. I recommend viewing it on the biggest screen with the best sound system. You might as well fully immerse yourself into it to fully ejoy the experience. RATING: ***** (5 out of 5 stars)