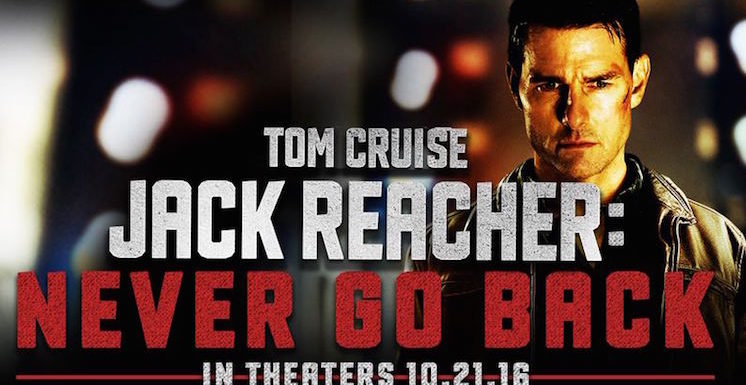 Tom Cruise is back for the second time playing Jack Reacher after we were first introduced to this literary character in 2012. We’re now seeing him going rogue. He is quick to tell anyone that he is an ex-major in the army. He’s a simple civilian now but knows he cannot fully separate ties with the military. He had been working with Major Susan Turner (Smulders) only to find out that she’s been arrested for espionage. He’s leery of the charges and fights to get her released despite the fact she doesn’t want his involvement. Hot on Reacher’s tail is a hitman (Heusinger) who’s working for a covert group named Para Source. They are behind the killing of two sergeants overseas who were under Turner’s control. If this wasn’t enough for Reacher to deal with, he learns that he may be a father after a waitress charges him with a paternity test of her fifteen-year-old daughter, Samantha (Yarosh). Reacher is able to free Turner, and finds himself on the run with her and Samantha to expose Para Source and get to the bottom of what may be an inside job.

Never Go Back is adapted from the 18th novel in the series by Lee Child. It’s a tried and true character with a big following. When Tom Cruise’s casting was first announced, fans were up in arms. His smaller stature doesn’t quite fit the massive looming presence that Child describes him as in the book. I’ve never read the novels, but I’ve heard him described as The Rock or John Cena to give some additional context. I left the first film thinking there could be some potential if Cruise could grow into the role and set this character and world apart from other action heroes.

Whether you agree with the casting or not, this is very much a Cruise-led vehicle in an attempt to have another franchise on his hands. He’s producing the film and working with Edward Zwick again who directed him in The Last Samurai. Zwick also collaborated on the screenplay with Richard Wenk (The Magnificent Seven) and Marshall Herskovitz (Love & Other Drugs). They’re taking over from Christopher McQuarrie who directed the first film. I’d be fine with the Cruise casting, but I still don’t feel like he brings anything special or unique to the role. He very much is a movie star and relies on his abilities to do his own stunts and can command the screen. The opening scene easily showcases this concept, but the rest goes down hill. Lee Child fans may able to see passed the size difference if he brings out other characteristics of Reacher that I am not privy to without reading the books. The problem with this film is that I didn’t get that from the fairly generic script that’s been given to him. This is your standard action flick with military cover-ups, double-crossing bad guys, and lots of running around. Reacher, Turner, and Samantha are always trying to stay one step ahead of the bad guys. Fight scene, run, fight scene, run, repeat, repeat. The Bourne movies have the same approach, but are done at a faster, crisper pace, and I care about that character.

The relationship between Reacher and Turner is tense which lends itself to some heated moments and quasi sexual chemistry. That kind of chemistry isn’t fully realized to make it a full on plot point. Cobie Smulders (How I Met Your Mother) does what she can with Turner. She fits the strong, noble character and has been in a few other action films thanks to her work in the Avengers franchise. In terms of Reacher’s daughter, Samantha, she is written to be a chip off the old block making you question if the claims are true. She naturally has a penchant for thinking ahead and conning others. When she isn’t doing that, she is an extremely angst-ridden and annoying teenager. Danika Yarosh who has primarily done television work on Heroes: Reborn and Shameless plays her. It feels like an Elle Fanning type role but wasn’t a good enough script to draw her to it.

I’ll be honest; I’m growing frustrated with the Jack Reacher movies. I felt the first film had potential for what the series could become. Never Go Back reminds me of the old ‘80s Arnold Schwarzenegger/Steven Segal type movies where they are basically playing themselves as they take out five henchmen in one swoop. There’s some laughable dialogue but a majority of the movie is played too seriously. I wish it would acknowledge the campiness in store and run with it. The military setting also feels reminiscent of your standard CBS/USA/TNT procedural show that’s been stretched out for two hours. There is an audience for those types of shows, and those people will no doubt enjoy Tom Cruise taking out everyone that gets in his way. There’s nothing wrong with that, but I know there’s more to Reacher than what this film has to offer. I’ve heard from quite a few readers who just love the books and the character Lee Child created. I oddly feel compelled to read the books to see what the fuss is about.

Is It Worth Your Trip to the Movies? Stay home and re-watch A Few Good Men or Mission: Impossible