Do you like watching pranks performed on innocent people? Boy, do I have a movie for you! If you have ever watched MTV’s “Jackass” or saw any of the three movies that were spawned after it, you will be familiar with Knoxville’s character of Grandpa Irving Zisman. Now he gets his own movie! At the funeral for his wife, Irving’s estranged daughter shows up to drop off his grandson Billy (Nicholl) without any warning as she has been ordered back to jail for violating parole. Billy likes to tell people his mother is a drug addict. Irving has no choice but to take Billy on a road trip back to be with his dad and to find a proper burial spot for his dead wife.

Now you may be saying to yourself, “Since when does a Jackass movie have a plot?” Yes, I am as surprised as you are. All of the other films Johnny Knoxville has done under the Jackass banner have been a collection of gross out gags performed by his buddies on each other. Jackass Presents: Bad Grandpa weaves together an actual plot working as transition material between all of the gags. There is indeed a script full of dialogue between Irving and Billy in the car throughout their trip. I was pleasantly surprised at this mix of documentary style filmmaking with a faux story thrown in. Borat is another good example of this mix. Let’s be real though. The majority of the audience will remember this film for the hilarious gags on its unsuspecting victims. Irving and Billy strike up random conversation with people on the street, the ladies at the bingo hall, restaurant patrons, a male strip club, and even a gang of motorcycle riders. 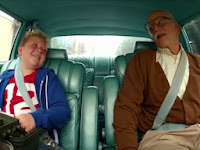 If you are familiar with the Knoxville canon, you are probably already aware of what kind of humor you can expect. It’s a mix of physical comedy, slapstick gags, fart jokes, penis jokes, and old man hitting on younger women jokes. The bits are crass, crude, gross, dumb and everything in between. Some of it seems so ludacris at times you wonder how people are falling for it, but it sure is damn funny to watch it all unfold. If you stay and watch the credits, you get a glimpse into the filming of it and how they were able to pull it all off. I give credit to many of the innocent bystanders that signed over their waivers to appear in the film. I am glad to see people able to poke fun at themselves and be up for showing their more embarrassing moments. I could not help but wonder how many people did not, how many were pissed off at them, and how many people they had to pay off to pay for their damages.

Not every bit or gag is laugh out loud funny; the big ones make it all worth while. I am typically appalled by Little Miss pageants, so I took a bit of pleasure out of Billy performing a lewd dance to “Cherry Pie” to the shock and disgust out of all of those stage parents watching him. Sometimes after you have had a really crappy week or month, a dumb comedy like this can be just the 92 minute release you need from the everyday life. Is it the best comedy of the year? No. Is the the worst? No way. Some may find the humor to be crewd and mean, but the able participation from its victims make it feel a bit more justifiable. You may also be interested in knowing Spike Jonze (Being John Malkovich, Her) produced and helped write the story behind it.