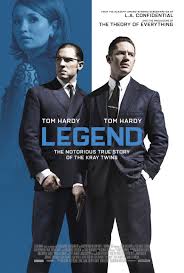 Tom Hardy continues to push himself as an actor with every role. This year he’s embarked on multiple projects from the phenomenal Mad Max Fury Road to The Revenant that comes out around Christmas. In Legend, he’s pulling double duty by starring as twin brothers Ronnie and Reggie Kray. The Krays made their way up the rankings of the London gangster scene in the early 1960s. Reggie was married and was a stoic businessman who owned various nightclubs. Ronnie, on the other hand, was openly gay, led a very flamboyant life, and suffered schizophrenia. Legend seems to take the traditional biopic approach by doing a standard timeline of events as they become part of London’s untouchables.

Like many biopics that take this approach, it doesn’t really know what kind of story it wants to tell or what angle it wants to take on their lives. The film is written and directed by Brian Helgeland who seems interested in his subjects but doesn’t know what he wants to do with them. He decides to use that easy plot device known as narration to help string everything together and tell plot points. I usually become leery of this as the plot should actually be doing that. It also doesn’t help that Reggie’s wife Frances, played by Emily Browning, does the narration and in turn just feels odd and out of place as she’s more of a minor character.

The Kray brothers led a pretty extravagant life that seems almost too unbelievable, but Helgeland plays it too safe and doesn’t take it far enough to show those extremes. Don’t get me wrong as there are scenes that are violent, but it didn’t feel overly graphic for a gangster film. There seems to be more of a focus on the verbal “wheelin’ and dealin” versus the violence at hand. Ronnie Kray had a slew of male lovers including Mad Teddy Smith, played by up and coming actor Taron Egerton (Kingsman: The Secret Service). Ronnie also caught himself in trouble getting in the sack with a politician. Yet again, Helgeland only writes one short orgy scene that feels pretty safe. I’m not saying there are has to be copious amounts of nudity and sex, but if Ronnie was out and didn’t care, than the film should take that same approach with his sexuality.

Tom Hardy is as electrifying as he always is and makes very distinct choices in portraying both brothers. He’s the only strong aspect of the movie. You can tell he’s having a great time with these roles. He does have one Hardy-ism that pops up again and that is the fact that he makes Ronnie hard to understand. Maybe the real life Ronnie Kray was someone that mumbled all the time. I haven’t watched any footage to know how close Hardy comes to nailing the vocal cadences of each brother. That being said, Hardy has had this issue before with Bane in The Dark Knight Rises and his role in The Drop, which can be hard on some moviegoers. I had to focus quite a bit whenever Ronnie was talking, and it seemed to be the common complaint from the audience when I was walking out.

Brian Helgeland won an Oscar for co-writing L.A. Confidential with Curtis Hanson. He also won a Razzie for writing The Postman. Needless to say his career has had its ups and downs. Whenever he’s pulling double duty with writing and directing responsibilities, like he is here and with the Jackie Robinson film 42, the end result isn’t as memorable as it should be due to their subjects. Legend is far too long and slow. There’s no doubt that the Krays led a bonkers lifestyle and became the untouchables of the London crime scene, but I wanted to actually see that instead of a Cliff Notes version of their story.

Is It Worth Your Trip to the Movies? Even with Tom Hardy pulling double duty, Legend is a bore.