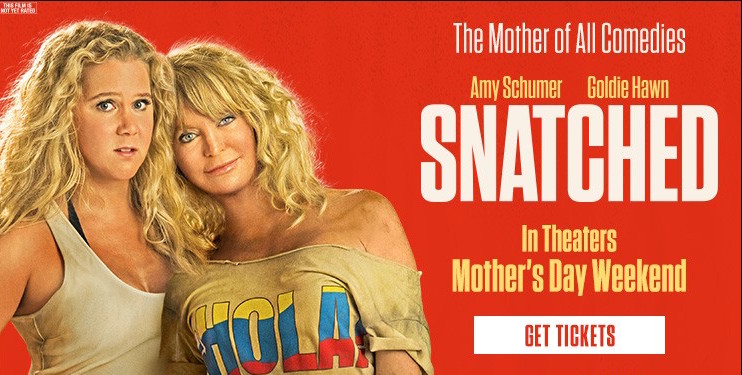 Snatched is the kind of easy breezy comedy you go into because of its stars, not because the trailer looked overly promising or that it has an original plot. It doesn’t really have either of those things. Audiences are going to see Snatched because Amy Schumer is the It girl in comedy right now and Goldie Hawn is finally back on the big screen after fifteen years. I think you go in hoping it will be the funniest movie of the year because of these two talents. It’s not that funny, but they make it work. Schumer plays Emily Middleton, and it just goes from bad to worse for her. Around the same time she loses her job at a clothing boutique, she is dumped by her ambitious boyfriend (Park) days before they are set to go on a vacation to Ecuador. Apparently Emily doesn’t have enough direction in her life as opposed to the boyfriend whose career in a rock band is taking off. Emily calls upon many of her friends to be her companion on this vacation, yet all of them turn her down. Her last resort is her mother, Linda (Hawn), who calls her back home after seeing the breakup news on Facebook. Emily finds an old photo album from back in the day and is inspired to have some mommy/daughter time for the vacation. At first Linda refuses as she claims her knees can’t handle all that activity. Nonetheless, she relents and they whisk off to a resort in Ecuador for some rest and relaxation.

What would this movie be if all they did was sit by the pool and sip cocktails? Emily’s flirtation is just the beginning of their wild adventure. The hot guy she has a drunken night with ends up scamming her and Linda, which leads to them in a hit and run taken hostage by some local criminals. They manage to escape but find themselves on the run in the middle of the Amazon jungle trying to make it back to the US Consulate. Lucky for them, they call upon Wanda Sykes and her “friend” Joan Cusack who are two fellow vacationers they met at the resort. Cusack is silent but deadly thanks to her previous military training.

Snatched is written by Katie Dippold who previously worked on Parks and Recreation as well as the Ghostbusters remake and The Heat. It’s hard to tell with these kinds of movies if the actors are cast first based on a concept or if she writes the script first as she always seems to cater them to play into the strengths of the actors. Snatched utilizes Amy Schumer’s style of raunchy humor and messy lifestyle that we’re used to seeing from Trainwreck or her standup. In one scene, we get to see Schumer flailing around in a drunken stupor making a slight fool of herself in front of the hot guy and then embarrassing herself in front of her mom once she’s back up in the hotel room. Don’t get me wrong; there are genuinely funny moments and Schumer has no qualms going for the risqué choices.

It’s great to see Schumer paired with Goldie Hawn as a mother/daughter pair. I can’t stress enough how refreshing it is to see Goldie Hawn back on the big screen again. It’s her first film role since 2002’s The Banger Sisters. They both come with their own contrasting brand of humor and get to play off each other well. It’s a joy to see two different generations of funny women headlining a big summer comedy together. Their natural comedic instincts and timing never felt rushed or haphazardly improvised to find a better punchline. I do wish Hawn’s role would have been written with a little bit more energy and creativity. Much like The Meddler, Going in Style, and Hello, My Name is Doris, these characters are written with that generic “old people” type humor where they are a bit more conservative and they don’t know how to use social media or take social cues.

As a whole, a majority of the movie doesn’t feel all that innovative. The idea of using a hostage/kidnapping during a vacation feels like a very unoriginal trope. It seems like every summer we get this kind of comedy where the innocent and naïve central characters think they’re off for some fun and wind up in a whirl of trouble involving strange guns and drugs. It’s hard to make these fresh after awhile as action-comedies tend to have a hard time finding that balance between genres. Kate Dippold’s script is kept pretty light basically playing up the comedy as it relies on the strong cast to carry it through. Hawn and Schumer aren’t the only funny ones as Ike Barinholtz, Wanda Sykes, Joan Cusack, and Christopher Meloni all have their time to shine. Barinholtz appears as Emily’s brother who is quite the momma’s boy.

The best parts of Snatched are the tender mother/daughter moments that come at the beginning and toward the end. It’s that middle hostage situation that drags this movie down. It’s best to go in looking for pure fluff. There are just enough laughs to keep you mildly amused throughout. I want to see Schumer stretch a bit more and play a different kind of character in her next movie. Hopefully Snatched means we’ll see more of Hawn back on screen. Maybe this means we can get a First Wives Club type of reunion movie.

Is It Worth Your Trip to the Movies? A passable comedy given the strong cast but not as endearing or original as it could have been.