When you think about it, The Great Gatsby has all the ingredients to be a fantastic movie. Fitzgerald! Baz! Leo! The Jazz Era meets Jay-Z! Somehow this recipe does not quite turn out like the masterpiece I hoped it would be. Nick Carraway (Maguire) is spending time in a sanitarium for depression, anxiety, and being morbidly alcoholic amongst other things. He starts to tell his psychiatrist about the time he spent in New York and how a man named Gatsby (DiCaprio) had a huge impact on his life. Being unable to fully express his thoughts, his psychiatrist suggests having him write it all down as a memoir. 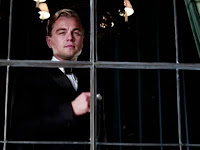 When Nick arrives in New York he settles in at a little cottage next door to a sprawling luxurious mansion. This elusive Jay Gatsby character owns the place. He throws the grandest parties filled music, alcohol, fireworks, and beautiful women. He is world renown yet maintains a mysterious air about him as few people ever seem to meet him face to face. Directly across the bay from the Gatsby mansion lives the beautiful Daisy (Mulligan) and her brutish husband Tom Buchanan (Edgerton). Daisy just happens to be Nick’s cousin and Jay’s former lover. Nick learns the hard way that Tom is by no means a faithful husband when Tom takes him to a secret place he goes to cavort with his mistress, Myrtle (Fisher). Nick receives an invitation to one of the infamous Gatsby parties and actually meets the host. Jay gets Nick to host a tea party the next day in order to reconnect with Daisy and potentially rekindle his romance. Jay’s feelings for Daisy have never dissipated over the years. His mansion and parties were all a way to gain her attention in hopes she would stop by to see him again.

There is no denying that Luhrmann has a distinct style and vision. The world he has created to represent the vision of author F. Scott Fitzgerald sits right alongside Romeo + Juliet and Moulin Rouge! Extensive choreography, music infused with various genres, and elaborate costumes by Catherine Martin are all present and from the outside can be a feast for the eyes. As a whole picture, Luhrmann relies too heavily on these theatrical moments to get his story going instead of trusting the characters and original source material. The cinematography and editing are so fast paced in the first part of the movie in hopes of capturing that vibrant rush that comes along with the party lifestyle. Luhrmann has brought in Jay-Z to blend the sounds of jazz and hip hop. There are fabulous moments and scenes in his previous movies where the musical elements really drive the scenes and intensify the emotions between the two lovers. I never felt that concept successfully worked in this case. It just plays as gimmicky and distracting.

When the camera slows down and the 3D special effects are not popping out at us, the story starts to take shape. Luhrmann has cast a strong ensemble willing to tackle on such well-known figures from the literary world. DiCaprio, as always, knows how to command the screen and can very easily bring out the multiple sides of Gatsby that show off his true personality. This role seems to fit him like a glove. It is probably a good thing the movie finally got made as he is getting too old to play a part that he was born to play. Edgerton and Mulligan are just as impressive as the tough, forceful husband against her beautiful, light, and airy qualities of Daisy. I cannot forget to mention Jason Clarke and Elizabeth Debicki who are equally fantastic in smaller roles. Maguire was the only negative standout which is a big problem being the narrator of the story. He lacks any sort of emotional connection and vibrancy that Nick should have toward the romance between Daisy and Jay.

I adored Lurhmann’s fusion of styles and tones in Romeo + Juliet and Moulin Rouge! but he cannot seem to make it work for The Great Gatsby. Throughout the whole movie, I was baffled by how inconsistent Luhrmann was in approaching this story. The character and dialogue driven scenes were simple and effective while the lush, CGI heavy party scenes were explosive and over-the-top. The two different styles never worked well together. He seems to trust the actors and the Fitzgerald language but feels the need to Luhrmannize any transitional type moments. The film was shot for a 3D release, but the effects came across as fake and phony like those recent Disney adaptations of Alice in Wonderland and Oz, The Great and Powerful. He easily could have made a lavish artistic movie that conveys the world of the Fitzgerald novel with real sets and effects without giving into CGI pressure. Luckily DiCaprio, Mulligan, and Edgerton are strong enough to make a portion of the movie work.