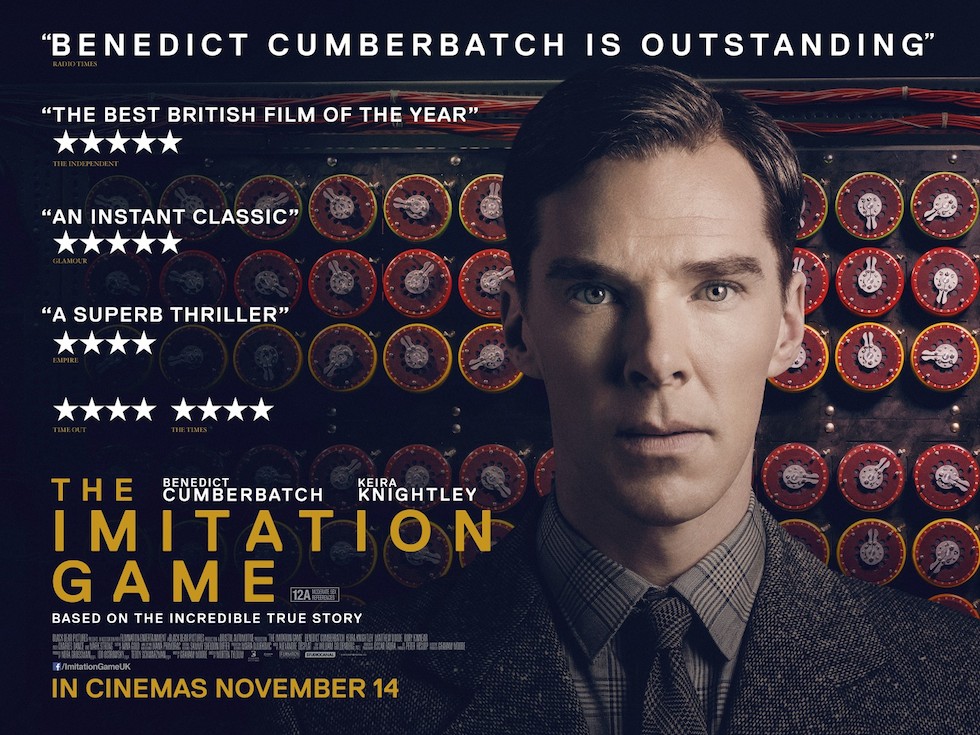 You probably have never heard of the name Alan Turing before unless you are a World War II scholar. It’s quite a shame when you think about all of his accomplishments. In 1952, Turing’s (Cumberbatch) apartment has been robbed and the police arrive to investigate. He ends up being arrested for gross indecency and the authorities have no idea about the history of the man they just arrested. At the time, homosexuality was illegal and was grounds for Turing’s arrest. The film cuts back to 1939 in Cambridge, England. Turing has been called in to join a team of mathematicians, linguists, and puzzle experts to go about decrypting German codes. At first thought, Turing may seem like a foolish choice because he doesn’t know German. The Enigma codes were being switched every day and there were millions of combinations to solve in any given day.

Turing is a prodigy but would rather work alone. He has some obsessive compulsive ticks about him and believes he is perfectly capable of carrying out the mission himself. He is assigned to the team, but oftentimes is seen working in a corner alone. One of his teammates (Goode) is quite appalled when Turing is assigned by Winston Churchill himself to lead the team. With the addition of Joan Clarke (Knightley) to the team, Turing changes their approach by creating a machine of their own to decode Enigma. It’s a race against time, money, and resources for these code breakers to decrypt the German messages.

It’s disappointing to think that it has taken this long for this story to finally get traction and get on people’s radar. Even in Hollywood, it’s been a project that has been in the works for quite some time. Graham Moore’s script has been on the infamous blacklist of the best unproduced scripts since 2011. It’s based off the Andrew Hodges’ book Alan Turing: The Enigma. Like the title of the book suggests, Turing was a bit of an enigma himself. Moore’s non-linear script plays out like a puzzle in itself as it tries to solve the mysteries of Turing’s life as each section of the story unfolds. It covers three time periods, each one giving an additional glimpse into the tragedies that befell him throughout his life. Even as a child he was incredibly smart but was seen as a bit of a loner. The love he had for his best friend Christopher became his driving force. As they were attempting to break the code, he tried to keep his homosexuality a secret even going so far as to propose to Joan. The story also covers the events and repercussions Turing faced after being arrested. I actually wouldn’t have minded if the film was longer to cover those later years. While his sexuality plays an integral part in the movie, the film’s focus is on the incredible technological achievements Turing became known for. He was the pioneer and inventor of we what think of as the modern computer. I do not believe we would have any of our current gadgets or iDevices if it weren’t for Turing.

While the film was in its early developmental stages, Leonardo DiCaprio was attached to star as Turing. I can somewhat see that as an interesting and plausible choice, but star Benedict Cumberbatch is the better choice. As Turing, he continues his reign of winning performances. It’s a perfectly executed performance where Benedict can have those obsessive compulsive and awkward moments that come with him being an introvert but doesn’t ever feel forced or contrived. He makes distinct choices to differentiate this role from Sherlock Holmes.

Cumberbatch has a fine ensemble to work next to with Matthew Goode (A Single Man), Allen Leech (“Downton Abbey”), and Keira Knightley (Pride and Prejudice) as members of the team. Each one of their characters views Turing in a different way causing some friction, secrets, and discoveries along the way. Knightley is deservedly earning praise with Golden Globe and SAG nominations for her role as Joan Clarke. It is a very different role for her than this summer’s indie hit, Begin Again. She brings some much needed humor and spunk to the film. She always has a charm about her and there is delightful chemistry with Cumberbatch in their intimate scenes together.

This is the first English language film for Norwegian director Morten Tyldum. He filmed quite a bit of it around the same locations it takes place in. It has all of those winning ingredients to make a World War II story into a feel-good movie. Don’t go rolling your eyes yet thinking that this has that Weinstein Company sheen that glosses over the tragedy. The final language that accompanies the credits leaves you with that searing image engrained in you that despite all of Turing’s accomplishments his life ended in a horrible and unjust way. The Imitation Game won the People’s Choice Award at the Toronto Film Festival and will continue to be a crowd-pleaser.

Is It Worth Your Trip to the Movies? Yes and hopefully with all of the awards buzz it will make Alan Turing a household name.