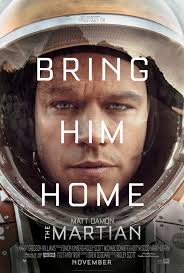 Last year, Jessica Chastain and Matt Damon starred in the science fiction epic Interstellar. They didn’t share any scenes together, but now they are back to familiar territory in The Martian playing Melissa Lewis and Mark Watley, two members of a space team stationed on Mars. Their crew, comprised of Sebastian Stan, Kate Mara, Michael Peña, and Askel Hennie, is caught in the middle of a huge sandstorm. Watley is struck by debris when he attempts to board the shuttle as they try to escape. He is believed to be dead while the rest of the crew on the Ares III shuttle are able to abort the planet in time. Only after announcing his presumed death does NASA realize he is very much alive. NASA head Teddy Sanders (Daniels) and mission director Vincent Kapoor (Ejiofor) have to back track on their public statement and work together to figure out the nearly impossible task of how to bring him home. Meanwhile, Watley fights to survive with limited food, water, and supplies while being fifty million miles away from home. It’s a good thing he’s the team botanist and can think creatively about how to grow vegetation on the red planet.

Sometimes after you watch a trailer you know right then and there, that said movie is going to be crazy good. You feel that giddy anticipation in you that it’s going to be something special. The Martian is based on the popular book by Andy Weir. I’ve never read the book, so I really went in without too many pre-conceived notions of what to expect outside of what the trailer provided. Drew Goddard’s (The Cabin in the Woods) screenplay is sharp and intelligent without getting too lofty and ambitious with the science terminology. Interstellar received some negative criticism for its ambiguous ending and left people scratching their heads afterwards. With the recent news that there is water on Mars, it makes this story all more tangible. 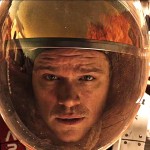 This is not just a story of someone stranded in space like Gravity for two plus hours. The story weaves back and forth between Watley’s survival attempts, NASA’s brainstorming sessions, and what’s happening with the crew of Ares III. Drew Goddard also injects quite a bit of humor in it that helps counteract the desolate nature of one person trying to survive. I can only assume that this was also part of Andy Weir’s vision. This could have nose-dived quickly if it would have followed a singular character wallowing in isolation. Instead, Damon’s character is written with a sense of hope despite his unending isolation. He’s a wise-ass with plenty of one-liners and cocky moments.

Ridley Scott gathered a fine crop of actors who all seem perfectly cast. Matt Damon keeps you invested in another charming character that he’s so good at playing. It made me wonder if his Good Will Hunting character would have grown up to be like Watley. The always strong and determined Jessica Chastain co-pilots of the Ares III. She continues to make exceptional career choices since her breakout role in 2011’s The Help. Back at NASA, Jeff Daniels is the trustworthy guy you want to be in charge. Seeing him in another leader role makes miss HBO’s “The Newsroom” as it was gone way too soon.

Director Ridley Scott has made some classic sci-fi films like Alien and Blade Runner but hasn’t had a big hit in awhile. It’s a sigh a relief for me when he returns to space. Even though I enjoyed Prometheus more than most people did, I think The Martian is his personal best since 2001’s Black Hawk Down. He’s no stranger to working on big epics that rely on a strong vision and sharp storytelling. He keeps the pace up and energy high as the days count down on Watley until it may be too late. It’s a captivating story that will leave you on the edge of your seat clutching the arm of your theater chair. Your whole body will hopefully tense up during the climax, as you become that spectator in the crowds hoping for Watley’s safe return. For two hours and twenty minutes, I never once took my eyes off the screen. The production design was beautiful as they tried to create what life on Mars would look like. Don’t worry if you see it in 3D, it will enhance the picture without it feeling to gimmicky. Even the small details like the closing credits and music choices of disco and ABBA are well thought out garnishes to compliment an already stunning movie.

Trust me when I say that The Martian lives up to the hype. It’s a big crowd pleaser that may leave you thinking about what may be out there after all. Is life on Mars possible, or would we be setting ourselves up for disaster if we tried to explore there? For younger moviegoers, this movie may be the educational tool that makes science class cool again and could lead to kid’s interest in space versus video games. Imagine that!

Is It Worth Your Trip to the Movies? The Martian is easily one of the best of the year. It’s a big spectacle that’s smart, probing, and executed to perfection.