Movie Review: THE PLACE BEYOND THE PINES

After watching 2010’s Blue Valentine, I knew that director Derek Cianfrance was a director that needed extra attention. The raw emotional story told by him and stars Ryan Gosling and Michelle Williams really struck a nerve with me. Cianfrance has re-teamed with Gosling for his third movie which is one hell of an undertaking. Luke (Gosling) is a tough, tattooed, stunt motorcycle rider. He drives around in small steel cages with two motorcyclists touring the small state fair circuit. His ex-girlfriend Romina (Mendes) pays him a visit and he finds out he is the father of her son, Jason. She has moved on from him and is working as a waitress in a small diner and is now dating another man. Luke decides to get his act together by quitting the stuntman lifestyle to stay in town and help raise his son. His good intentions to turn his life around quickly stall as he turns to robbing banks to make money for his son. 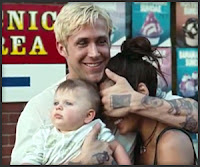 After a couple of successful heists, Luke hits a snag on one attempt sending him into an altercation with rookie policeman Avery Cross (Cooper). The film shifts focus onto Avery’s life. Avery comes from a wealthy family and has a beautiful wife (Byrne). There is a pre-determined path that his family wants him to go down, but Avery is torn with what he wants to do in life. After the altercation, he comes to realize his colleagues in the police force led by Deluca (Liotta) are about as corrupt as they come causing interal struggles with Avery’s core values and constant determination to do the right thing. The story takes another turn and jumps fifteen years later. The culminating focus of the story narrows in on the actions of Luke and Avery and how they have impacted theirs sons. Avery is now running for public office but his teenage son, AJ (Cohen), has gotten himself messed up and arrested for drug possession with Jason (DeHaan). AJ and Jason have no idea of the history between their two fathers, and their friendship comes into question as certain truths start to reveal themselves. 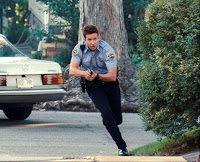 I am always drawn to big ensemble dramas where actors are being pushed in every scene. With these three interconnected stories, Cianfrance delivers strong performances across the board from his cast. Gosling is as strong and realistic as he is with every character. Mendes plays completely out of her standard sexy bad-ass chick routine I think she has gotten herself stuck in. She has finally taken on a role that allows herself to give off a strong, stripped down, and vulnerable performance. This role has finally forced me to take notice of her when I had never given her credit before. Liotta may be the only one in comfortable territory playing the ruthless corrupt cop. I am happy to see Cooper successfully take on another flawed character. I was hopingSilver Linings Playbook was not a fluke performance. It is hard not to take notice of Dane DeHaan. He reminded me of a young Leonardo DiCaprio in his approach. Do not be surprised if he follows in the footsteps of DiCaprio or Gosling and becomes the next in demand actor if he continually takes on these challenging and unstable characters.

Cianfrance is drawn to making movies about family life.Blue Valentine focused on the husband and wife dynamic while The Place Beyond the Pines taps into the relationships between fathers and sons. The central characters must deal with coping with the life they have either been born into or got themselves a part of in their later years. They have to realize that certain choices and actions have consequences from one generation to the next. For an up and coming director, this multi-layered approach to the story is no easy feat. With the opening tracking shot, the cinematography is gritty and very in your face at times. Cianfrance manages to go all in without playing it safe in any regard. The film is by no means perfect, but it has had a lasting impression on me. I can only imagine what future stories and themes Cianfrance will come up with, and I know I will be in line as soon as they open. RATING: **** 1/2 (4.5 out of 5 stars)