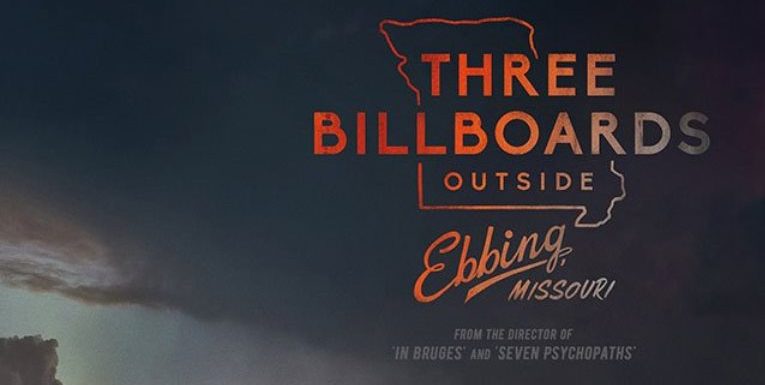 In Three Billboards Outside Ebbing, Missouri, Frances McDormand gives the best performance of her career since the old Marge Gunderson days in Fargo. She plays Mildred Hayes who is still grieving after the murder of her daughter, Angela. She has driven by three billboards outside the town border countless times before but only now does the light bulb go off. They are old, rickety, and haven’t been touched in years with various panels hanging off. She pays $5,000 for the first month’s rent to send a pointed message to Sheriff Willoughby (Harrelson) who has yet to solve the case and arrest the man who raped and murdered her daughter.

The three billboards are noticeable, to say the least, with their red background and bold black text. Ebbing is a small town where everyone knows each others’ business. It’s no secret that it was Mildred who put them up, and now she is under fire for her brazen attempts to be heard. Not even the local priest is happy with her. She has zero time for anyone that doesn’t want to help her. Adding fuel to the fire is Officer Dixon (Rockwell), the quintessential racist cop who believes he runs the town. All Mildred wants is to have closure, yet that’s hard to come by in a town full of secrets, selfishness, and intolerance.

Irish playwright Martin McDonagh won audiences over with films like In Bruges (2008) and Seven Psychopaths (2012). He writes a wickedly dark sense of humor into his scripts, and that is very present in Three Billboards. It’s the kind of snappy, and sometimes vulgar, comedy that may turn certain audiences off. It always feels appropriate for his characters garnering that cringe-worthy shaking of the head at the same time. Much like the Coen Brothers, his characters are offbeat but always grounded in reality. They’re gems for any actor to play as they’re wholly original and McDonagh gives the actor everything they need in the script. He’s assembled an exceptional cast of some of the best character actors working together who are able to ride the line of making them unhinged, yet never turning to caricature.

Frances McDormand gives a staggering, Oscar-worthy performance as Mildred. She is captivating from start to finish. She can stare down any character leading you to question just how far she will go like any mother or father would in her situation. She effortlessly nails every zinger McDonagh throws her way when Mildred refuses to back down. During one scene, she is startled by the presence of the priest in her home. It ends with a topical monologue about the idea that if you’re a member of some group, you are culpable regardless of your innocence. There was an actual mid-movie applause by the audience as she takes down the priest. She goes toe to toe with Woody Harrelson and Sam Rockwell who both appeared in McDonagh’s Seven Psychopaths. Woody Harrelson brings out the conflicted side out of Willoughby, as he understands Mildred’s message but doesn’t always agree on her methods. Rockwell gives one of the best performances of his career as racist cop Dixon. It is a treat to see him soar with such an uncomfortable character. Watching McDormand and Rockwell spar is a master class in acting. He rightly deserves award consideration for his performance going up against her. Joining them are Oscar nominees John Hawkes (Winter’s Bone) and Lucas Hedges (Manchester by the Sea) as her ex-husband and son, respectively. Peter Dinklage also shines by playing the polar opposite of his Game of Thrones character.

Three Billboards Outside Ebbing, Missouri is less about trying to solve the case of who raped and murdered Mildred’s daughter, but more of an examination of how a small town reacts when it’s shoved in their face again. It’s easier to sweep it under the rug claiming they tried when they didn’t really fight for her. It’s an eye-opening look into the role hate and power can play in a community. How often do we hear about characters like Dixon who let the power that comes with being a cop overtake them? Add into that someone fueled with hate toward a different race and they’re a ticking time bomb. Power is also played out when Mildred faces someone who could be her daughter’s rapist. He’s a violent man who knows who she is and completely uses his power on her in an attempt to scare her. We don’t know if he’s guilty or not of that crime, but he’s sick enough to use it to his advantage.

Martin McDonagh has written a compelling and original script oftentimes taking the audience in a different direction than expected. You’ll probably find yourself laughing more than expected given the material, but that’s the McDonagh way. Every one of his actors gives a top-notch performance, and I expect McDormand and Rockwell to be among those talked about around Oscar time.

Is It Worth Your Trip to the Movies? Frances McDormand is always worth a trip to the movies.