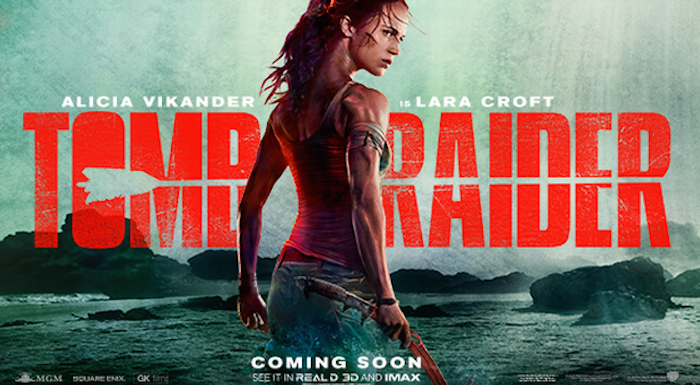 I should preface this review by stating that I am not a gamer. I’ve never played the “Tomb Raider” video games, but like many, I’m familiar with the character of Lara Croft given the two previous movies. The video game got a reboot in 2013, which apparently means that a movie reboot was the natural next step. This iteration finds Academy Award winner Alicia Vikander (The Danish Girl) as Croft. We learn that at a young age, her father (West) left his family to go in search of a hidden ancient tomb belonging to the Japanese Queen Himiko. It’s been years since her father has been seen and is now presumed dead. Lara is strapped for cash, yet is leery about signing over the death papers, which would in turn give her his inheritance. She ultimately decides to sign the Declaration in Death papers and as part of the process is given an ancient artifact leading to a hidden basement of clues, texts, papers, and notes her father left behind. Her father’s dying wish was to have his files on the Himiko case destroyed. She’s too intrigued by what she finds, and disobeys his orders. Her inquisitive nature leads her to Hong Kong to finish her father’s work. Lara learns the hard way that he wasn’t the only one looking into Himiko’s tomb when she’s taken hostage by the Trinity group led by Mathias Vogel (Goggins).

If the premise seems a bit generic, that’s because Tomb Raider has that general quality about it. This isn’t the Lara Croft type of movie we’re used to as this iteration decides to tell the origins story of the character. Do we really need this? I’m so exhausted by origin stories. The new DC Extended Universe made the same poor choice with the Ben Affleck Batman. I think we could have rebooted the Lara Croft franchise and gone the James Bond approach by just casting a new actress and given her a fresh mission to go on while incorporating the father angle.

The casting of Alicia Vikander is a daring choice as she doesn’t quite fit the design we’re used to seeing of the character from the games. I want to be clear though that it’s not a bad thing despite the image people may have of her in their heads. Angelina Jolie originally played her and has the stature and masculinity typically associated with the character. We see Vikander’s Croft trying to find her strength throughout this film. She’s not quite the fighter we’ve come to expect. Vikander brings a softer edge to the character, which fits the origins/pre “Lara Croft” side of the character. She’s a strong enough actress to carry this version of the character representing the everyday woman who, in this case, has distanced herself from her family’s past but is now forced to confront her legacy. Vikander can also pull off the intelligence of the character as we find out her father’s knack for solving clues and riddles has been passed down to her.

A big film like this should be an action juggernaut. The first initial sequence follows Croft in a “Capture the Flag” style bike race through the narrow streets of London. It’s a pretty slick chase that’s one of the more exciting moments in the movie. Croft is a speedy character whether it’s by bike or by foot. Too much of the rest of the action relies heavily on CG effects, poor CG effects to be exact. It begs me to wonder if the film’s budget wasn’t high enough to pull off what was asked for or if the stunts and tricks are too elaborate in the first place. I had the same conundrum while watching A Wrinkle in Time. It feels more aligned with The Mummy than say Raiders of the Lost Ark. It’s missing the fun and humor that came with Indiana Jones. I get that they’re different characters, but I want to feel the exciting thrill factor. Tomb Raider takes itself too seriously and isn’t deep enough to find the mystery or urgency present.

This is the biggest film to date for Norwegian director Roar Uthaug. I can’t tell if the movie is attempting too much or too little. Is there too much going on with trying to reboot a franchise with an origins story and a new actress? Everyone involved is trying to make an exciting action film to be respected by the gamers who have invested countless hours with the character. At the same time, there’s too little going on as the story and the characters are lacking any sort of creativity. I’m not a gamer, and I barely know Lara Croft from any other game, but even I don’t feel a need for an origins story. Tomb Raider has a few good things going for it mainly with the leads. Alicia Vikander has the potential to make for a whip-smart Lara Croft. Walton Goggins, who was excellent in The Hateful Eight, is always reliable as the bad guy. He’s sleazy and vial and just what is needed for this kind of movie. The ending leaves the impression the studio wants to create a new franchise as Lara realizes there are more secrets and skeletons in her father’s closet. We start seeing that shift from innocent Lara to vengeful Lara. I’d be curious as to what Vikander will do with the character, but I wouldn’t be saddened if a sequel didn’t happen.

Is It Worth Your Trip to the Movies? Only for Lara Croft enthusiasts