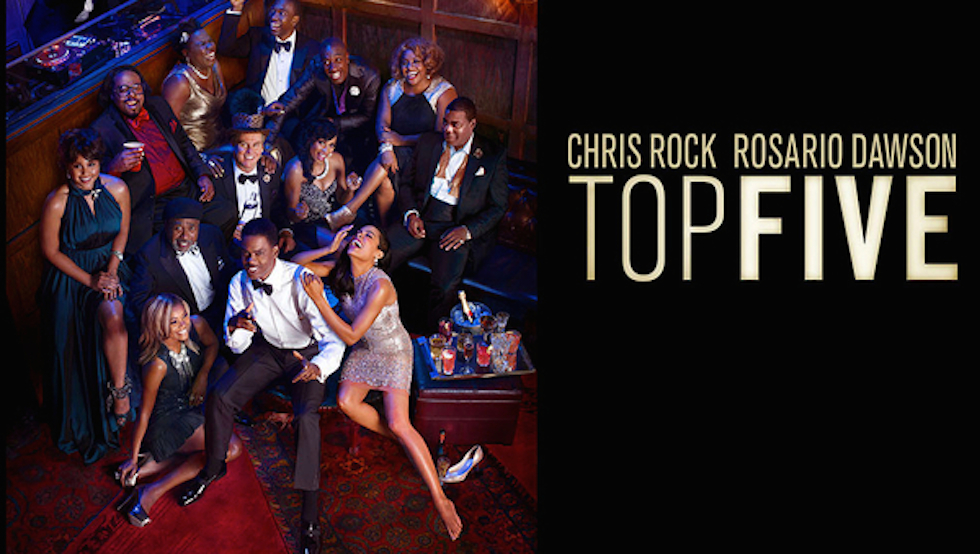 A few years ago I was tending the bar for one of Chris Rock’s stand up gigs that he was touring across the US. I was done pouring cocktails for the hoards of fans who came to the show and listened to his set from the hallway. It dawned on me very quickly that this audience wasn’t laughing. Maybe Chris Rock was off his game that night. Luckily, he is back in rare form with Top Five. He plays actor and comedian Andre Allen who probably mirrors much of Rock’s own personal life. Andre is going through a career crisis and is desperately trying to be taken serious as a dramatic actor. He is most famously remembered for his Hammy movies, a comedy franchise where he donned a bear costume to fight crime. He is now starring in Uprize, a film about slave rebellion during the Haitian Revolution. It’s a far cry from his days as Hammy, and his fans and critics can’t seem to make the transition with him.

He has had a troubled past with drugs and alcohol, but he is on the road to recovery. At the same time he is trying to promote his new movie, he and his fiance Erica Long (Union) are planning their wedding. I should rephrase that as she, along with Bravo, are planning it. She is a massively popular reality star on the network, and they are paying for the wedding and bachelor parties as part of her show. You get the impression that Andre and Erica don’t have the best relationship. He has more chemistry with reporter Chelsea Brown (Dawson) who is interviewing him for the New York Times. They spend a couple of days together as she follows him on his press tour for the film, and he opens up about the pressures of being funny and if being sober killed his comedic edge.

There is no escaping the blatant meta feel to the film as you wonder how much Rock is drawing off his own career with the Andre Allen character. He also serves as director and writer. Apparently, he wrote the script while he was filming Grown Ups 2. Now, I didn’t see that film, but I can only imagine that he needed some sort of way to still feel artistic while making that movie. He has written, directed, and starred in other movies, but this one feels like the Chris Rock we know from his stand-up days. He doesn’t seem restricted by a studio and is able to unleash a fury of thoughts on the industry, comedy, black cinema, negative criticism, and everything else. It’s a very open, honest, and biting commentary. There is very interesting scene where Andre goes to a movie theater and sees a very long line for the latest Tyler Perry movie, and there’s maybe ten people for his historical drama.

Rock has lined up a who’s who of comedians for a variety of bit parts in the movie. Kevin Hart, Cedric the Entertainer, Tracy Morgan, Sherri Shepard, Whoopi Goldberg, Jay Pharaoh, and Saturday Night Live newbies Leslie Jones and Michael Che. Leslie Jones is a scene-stealer and proves she is one to watch. Cedric the Entertainer gives a rather revealing performance in one of the movie’s funniest scenes. Gabrielle Union’s character seems ripped right off the Kim Kardashian playbook of how to stay famous. I don’t mean that in a good way either as her character is clearly representing how Rock feels about reality TV and how people like Kim stay relevant and can get everything catered toward them.

It’s refreshing to see Chris Rock in his element again. He has written one of the funniest movies of the year. I haven’t seen an audience laugh so loudly in a very long time. There are hoards of cameos, especially one that took me by surprise. No, I’m not about to reveal that here. The film was co-produced by Kanye West and Jay-Z, and naturally, some of their music is playing throughout the film. I had expected the title of the film to refer to multiple kinds of lists, but it only refers to various characters’ top five rappers. I like seeing this raw and truthful side of Rock. He has wonderful chemistry with Rosario Dawson as they stroll around New York City and contemplate what life has to offer. I hope we see more of this version of Chris Rock. He can leave some of those other comedies behind.

Is It Worth Your Trip to the Movies?  Yes, if you need a good laugh to take your mind off of the stresses of the holiday season.