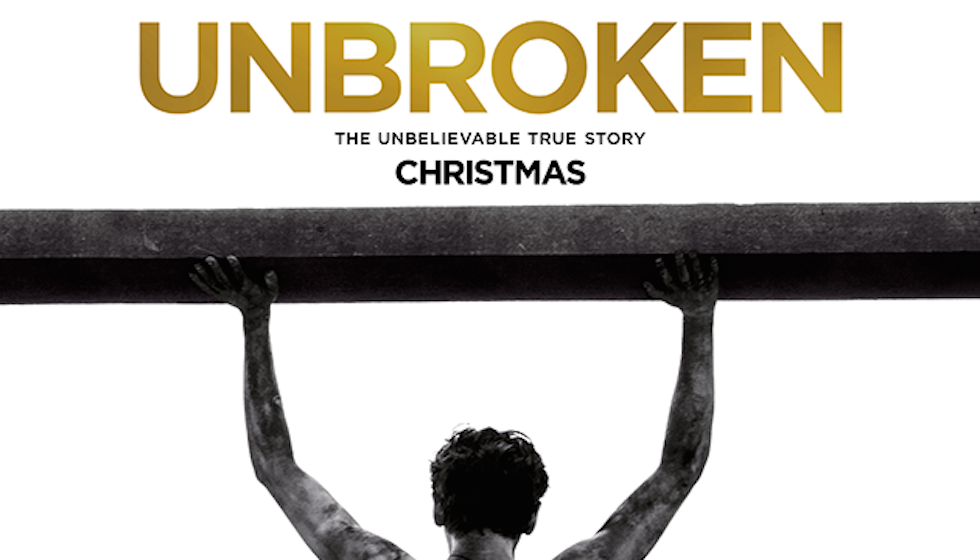 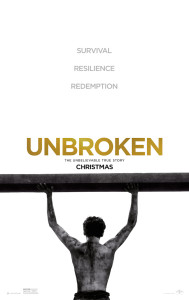 The latest directorial effort from Angelina Jolie has come with sky-high expectations. It’s based off the book of the same name from Laura Hillenbrand (Seabiscuit) that has been on the bestseller list for the last three years. Hillenbrand gave a thorough and extensive look at the life of Louis Zamperini, played here by the gripping Jack O’Connell. Zamperini first got noticed for becoming the fastest high school runner in the mid 1930s. His talents on the track led him to the 1936 Olympics in Germany.

After his Olympic run, he enlisted in the Air Forces to fight in World War II. It was a choice that would later change his life like no one could have imagined. He and his crew were out on a research assignment from his base in Hawaii when the engines on their plane The Green Hornet started to fail. Their plane crashed into the Pacific Ocean and left only three survivors: Louis, Mac (Wittrock), and Phil (Gleeson). They were able to get their hands on two rafts, minimal supplies and some scraps for food. Their days stranded out in the middle of the Pacific Ocean carried on with no hope of survival. Louis sets a plan in place early on how they can ration out their food and try to let optimism carry them through as they must battle nature’s grueling elements. It was on their 47th day that they were finally rescued, only to have it be the Japanese staring back at them. Even though they were finally out of the water, they were placed in horrible conditions at a prisoner of war camp.

Unbroken is one of those stories that seems all too horrible to be true. If you read the Hillenbrand book, you know what I mean. Zamperini never seemed to catch a break in life. It would be nearly impossible to cover it all in the same fashion for a movie unless you were going to split his story up over two or three movies. The script has some heavy names attached to it with the likes of Joel Cohen, Ethan Cohen, Richard LaGravenese (Behind the Candelabra, The Fisher King), and William Nicholson (Les Misérables, Gladiator). It was not an easy feat to adapt the book without it feeling like it was just picking out the highlights to show. When watching the film, you get the sense that they only picked out the most brutal aspects of his life. There is a relentless idea behind it to get the audience to understand the horrors that he went through. I think you can still have this, but allow some room for the film to breathe and show the lengths Zamperini and some of the other prisoners went to keep their spirits high to survive.

Fans of the book should also note that the whole third act is not included in the movie. While I understand the choice to wrap up that portion in a few information cards as the credits rolled, I also think that era of Zamperini’s life, including his struggles of adapting to post-war life and how he was able to forgive, is equally as fascinating and important to his survival story. I would not have minded a three hour film if it felt like a complete picture of his life. The film primarily focuses on Louis’ life trying to survive on a flimsy raft and his days being brutally beaten in the POW camps.

Jolie made the wise choice to cast newcomer Jack O’Connell as Zamperini. He has some credits under his belt but doesn’t have that recognizable factor that may have been too distracting. He aptly gives Zamperini that power, vitality, and resilience that is needed. It is a tough performance to watch, but that is what makes it all the more impactful. Another standout in the cast is Miyavi who has the task of playing the film’s ultimate villain in Mutsushiro ”The Bird” Watanabe. He’s the prison guard who unleashes all of the brutality over Zamperini and the fellow POWs. Miyavi is quiet, deadly, and unsettling every time he appears on screen.

If you put some of the structural things aside, the film still succeeds at showcasing Louis’ remarkable life. The scale of this film was no easy feat especially for a new director as this is Angelina Jolie’s second time behind the camera. Cinematographer Roger Deakins (Fargo, Skyfall) comes to her aid by capturing the dark, filthy atmosphere of the camps as well as the vast emptiness of the ocean. She has a cast that completely delivers and is willing to go through extreme measures to tell this story. The film definitely keeps you on edge at presenting the appalling conditions our troops went through. Even though I still recommend the movie, I can’t say that I was as moved by it as I was by the book.

Is It Worth Your Trip to the Movies?  You may enjoy it better if you don’t have any preconceived notions of the story.