Movie Review: WHITE HO– USE DOWN

Sometimes a mindless silly popcorn action flick is just what you need after a long week. John Cale (Tatum) is hoping to gain a position as part of the US Secret Service. His relationship with his daughter Emily (King) is strained as she lives with her mother. She is book smart, good with technology, and is fascinated with President Sawyer (Foxx) and everything else White House related. John takes Emily with to the White House in order to gain some cool dad points with her. 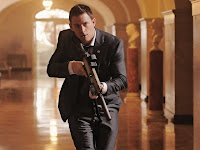 John’s interview with Secret Service Special Agent Carol Finnerty (Gyllenhaal) does not go as well as he was hoping for. They are former college acquaintances and she does not think he has the motivation and hard work ethic for the job. John can’t bear to tell Emily the bad news, so they decide to go on a White House tour. A bomb explodes at the U.S. Capitol building and the White House is put on lock down. John and Emily ended up getting separately and now she’s left alone in the bathroom while he is with the group. Posing as a repair service, a group of men led by Emil Stenz (Clarke), take the tour group hostage and start killing off members of the cabinet in order to get to the President. John escapes the tour group in attempt to find his daughter. At different times, both John and Emily have first hand encounters with the terrorists. Emily is able to record their actions on her phone and posts them on her blog. The video goes viral instantly and the faces of the terrorists are broadcast all over the news. Even though John is able to rescue the President from the leader of the terrorist group, their escape reaches quite a few road blocks as they realize the terrorist group is far more advanced than they realized at first.

When you go into a Roland Emmerich film, you should probably already know the quality you are getting yourself into when you buy your ticket. It is time to leave your brain at the door and grab a bucket of popcorn. You will be in for a massive action movie that will most likely have cheesy dialogue, implausible situations, massive explosions and some destruction of national monuments. What else would you expect from the filmmaker of Independence Day, The Day After Tomorrow, and 2012?

White House Down has all of that and knows it. I think Emmerich knows what kind of film he is making and makes the most out of it. The story goes to the extremes and is quite laughable at times due to how much these terrorists get away with. The number of explosions and times Channing Tatum dashes across a room of flying bullets is insane, but that is part of the fun. His guns never seem to run out of bullets either. The dialogue is always so serious that it deserves a couple of good laughs. It also helps if you bypass the fact that the casting of Channing Tatum and Jamie Foxx is a little unconventional here. While they have both done action movies before, I would not say that this genre is their forte. Tatum seems a bit too young to play the dad to Joey King’s character. Foxx also seems a bit too young and hip to play the President. Toward the beginning of the film and before the shit starts to hit the fan, he seems to be trying to pull of his Obama impression a little too much. In all reality, who really cares. The action kicks off into full gear early on and never lets up until the end. In order to like this movie, you have to go in looking to have a fun time and forget about three dimensional characters, a unique plot, logic, reason, and Academy worthy acting. Did I mention Channing Tatum spends good quality time running around in a muscle shirt?
RATING: ***1/2 (3.5 out of 5 stars)