One of my goals for the blog for 2013 was to go back to the classics and expand my film history knowledge. It is very easy for me to get caught up in the latest new releases opening at my local multiplex or whatever is new on Netflix. This causes me to ignore and neglect all of the films that have beaten the odds and have stayed relevant for so many years after their initial release. It is imperative for any movie lover to go back to the films that have permanently left their mark on society and the film industry. The latest classic I took down from my movie library was Charlie Chaplin’s Modern Times. I bought it as part of the Criterion Collection sale at Barnes & Noble and recently sat down to watch it. 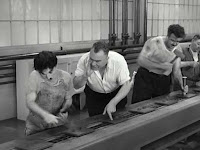 “Modern Times.” A story of industry, of individual enterprise—humanity crusading in the pursuit of happiness.Crowds of men are leaving the subway and heading into work like any ordinary day. The head supervisor of the factory is lazily doing his puzzle and reading the paper while his employees work hard in another room. He commands for “more speed” via a huge screen above the work room. Chaplin, one of the workers, is working as fast as he can in his assembly line. He attempts to take a quick break in the bathroom, but the supervisor catches him and orders him back to work. Chaplin’s supervisor is all about speed and more labor. An experimental feeding machine is tried out on Chaplin’s Little Tramp character. The intent is that it will automatically feed the workers as they are working. Needless to say for Chaplin, it is disastrous. 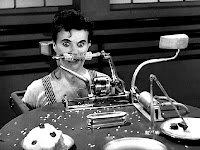 By the middle of the afternoon, Chaplin suffers a nervous breakdown and starts horsing around, playing with all of the controls, and squirting people with oil cans. He gets taken to a hospital and on the day he is released, he gets himself caught up in a labor strike and gets arrested as the police think he is the leader. Meanwhile, a beautiful woman referred to as the gamine (Goddard) and her sisters have become orphans after their father dies. She runs away from the authorities before she becomes property of the state. After a few chance encounters, Chaplin and the gamine fall smitten with each other. Do not think that the antics and shenanigans will stop now that they are a couple. 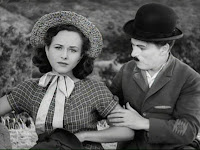 The gags never end for Chaplin. He is a comedic master by filling every scene with hysterical gems relying on his contorted face and limber body. An encounter with white “nose powder” in jail puts Chaplin in quite a state. Even his growling and upset stomach gets the best of him. This film marks the last time Chaplin used his Little Tramp character. He originally was going to make the movie into his first talkie. He wrote a whole screenplay for it but opted to make it a silent picture instead. He could not justify making a talkie with the history of the Little Tramp character. He sporadically uses sound throughout the film by having it come from very intentional sources.

Chaplin makes Modern Times more than just a silly silent comedy. It is easy to laugh at his never-ending physical gags and flawless timing, but at the same time, he is making a strong commentary on his views toward the shift from the Great Depression to a capitalist technology based world. You see instances of this at his time at the factory between the way his supervisor acts and the endless ways they try to aim for more speed and slave labor practices. The Little Tramp continues to fight for the American dream despite the shift in focus in these changing times. 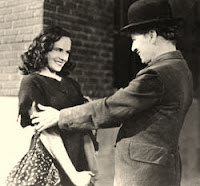 Part of that American dream is the love story between Little Tramp and the gamine. Having never seen the film before, I was not expecting the love story between the two characters. I was pleasantly surprised and found it quite sweet how they continued to be there for each other no matter what other forces and problems arose. The love story is made even more charming with the Chaplin penned song “Smile” that can be heard throughout the movie. Chaplin composed the instrumental theme specifically for the movie. You will not here the infamous lyrics as they were actually written nearly twenty years later based off some of the lines in the dialogue cards.

The American Film Institute (AFI) has praised the film’s undeniable legacy by placing it in a couple of their “100 Year…100___” lists. The film ranked #33 in the 100 Laughs list and ranked #81 in the 100 Movies list in 1998. For the 10th Anniversary Edition, it moved up to #78 in the 100 Movies list. I can completely understand and support these listings after watching the film. Again, I ask myself “Why did I wait so long to watch this?” The film buff in me wants to go out and buy the other Chaplin films that are available and delve into those. The Gold Rush, The Great Dictator, and Monsieur Verdoux are also available through the superior Criterion Collection. My wallet would feel quite a difference after those purchases. There are too many young people these days that have no appreciation for the comedic geniuses that came with the silent film era. I challenge today’s audience to watch one of Chaplin’s films and not come out with a new found understanding of this style of comedy that directly attributed to the comedies of today.