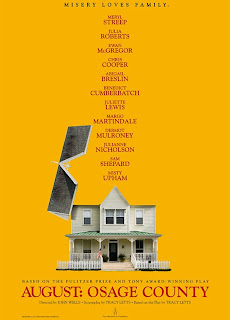 When I first heard that Goddess Meryl Streep had been cast as Violet, the pill-popping matriarch of the Weston family, I thought of no one better that could play that role for the big screen adaptation of the Tracy Letts play. After Violet’s husband Beverly (Shepard) goes missing, the whole family gathers together in the house they grew up in order to find him. To call this family dynamic dysfunctional would be an understatement.

Movies adapted from stage plays can be tricky and hit-or-miss. Most of the time the casting is way off and the tension and themes of the play get lost in translation. I have seen the stage play, and I hope the movie comes close to portraying these character relationships that are vital to the story. The trailer seems a little light hearted for the first look into the film. The play is so heavy and dramatic but that does not quite come across in the trailer. Letts wrote the screenplay and with this A-List cast I have faith the final product will have the attitude, sharp dialogue, and crazy moments the play is known for having. If it gets good buzz, it could garner some Oscar buzz for Streep, Martindale, and even Roberts.