My Criterion Collection: THE KILLING (1956)

With its opening narration in that voice you would hear on a radio show mystery and the score by Gerald Fried played against the credits, you already know something big is going to happen. This is not going to be a light, fun day at the races. It’s Saturday afternoon in September and the place is hopping with people placing bets on their favorite horse, grabbing drinks, and watching the race. A gang of individuals including Mike the bartender, police officer Randy, Nikki the shooter, George the window teller, and ring leader Johnny Clay (Hayden) have a scheme set in motion that must go according to plan.

Early on, the film introduces the audience to some of the backstories involving our characters. One of the more vital introductions is with George (Cook) and Sherry Peatty (Windsor) and their broken marriage. Sherry is quick on the tongue often talking back to her husband. She doesn’t really seem to think much of him. He claims he’s going to get rich, and she basically laughs at him. George’s loose lips get him into trouble when he is reprimanded by the gang after Sherry is found snooping around the secret meeting location. He debates about leaving the mission after he realizes the situation he’s gotten himself into, but Sherry informs him that if he really loves her he should stay all in. It turns out that she is a bit of a floozy as she also happens to be seeing Val (Edwards) on the side. When she steps out to see Val, she reveals George’s elaborate plan to get rich. George and his boys plan on robbing the race track of two million dollars. 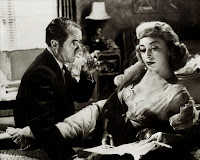 I feel like whenever you think about Kubrick’s work, his earlier films like The Killing, Paths of Glory, and Killer’s Kiss rarely get mentioned as The Shining, 2001: A Space Odyssey and A Clockwork Orange are his more popular and universally seen films. I always love going back to a director’s earlier works to see how they started and to analyze the scope of their career. I have done that a couple of times now in My Criterion Collection with my reviews of Wes Anderson’s Bottle Rocket and Terrence Malick’s Badlands. I encourage any movie lover to dissect a director’s career like that as it’s always fascinating watching their growth. Even as a young director, Kubrick seems to be just as particular about his way of working as he was later on in life. According to one of the special features, cinematographer Lucien Ballard HATED working with him. Kubrick had previously worked as the cinematographer on his own films but wasn’t able to for this one. They frequently disagreed on lighting and camera choices. I actually really enjoy the darkly lit interiors and the use of lamps and lights to create minimal lighting effects.

A heist at the tracks may seem like a simple premise on the outside, but there are a few twists and shocking moments that keep the audience guessing. This film easily could have been told in a very conventional sense, but why would Kubrick take that route. He wrote the screenplay with additional dialogue added by Jim Thompson and is based on the book “Clean Break” by Lionel White. They take a non-linear approach using time stamps like “At 11:30 that morning” and “At 2:00 that afternoon” to keep the audience in check. Originally this received negative reaction from various screenings. Kubrick obliged and tried re-cutting it into a straight timeline, but later switched it back again. When it comes to the heist, Kubrick replays the mission from numerous angles and character’s perspectives depending on how each person is involved in it.

There are a few special features on the Criterion Blu-Ray release worth noting. There is a new interview conducted specifically for Criterion Collection with producer James B. Harris about his working relationship with Kubrick and the making of the film. He highlights that he gave the idea to Kubrick and suggested it to be their next movie. The studio only gave them $200,000 even though the budget was $330,000. Harris acquired the rest of the money in order to get it made. There is a lengthy interview with Sterling Hayden from a French television series where he discusses his collaboration with Kubrick. They would later collaborate on Dr. Strangelove or: How I Learned to Stop Worrying and Love the Bomb. As always, we get a new digital restoration of the film, with an uncompressed monaural soundtrack. There are essays by film historian Haden Guest and an interview with actress Marie Windsor. Plus as a bonus, Kubrick’s earlier work Killer’s Kiss is also featured in its entirety here with a new high definition digital transfer.

At the age of twenty-eight, it is quite clear that he had a vision, style, and tenacity to do exactly what he wanted to do. If horse racing is a foreign concept to you, don’t let that stop you from enjoying this film with classic noir characters. Kubrick was correct in wanting character actors for these types of roles. Sterling Hayden, Marie Windsor, and Elisha Cook Jr are all fantastic. In a smaller role, Timothy Carey is sleazy and creepy as Nikki the shooter. The film is only eighty-four minutes and moves along swiftly as you wonder if they will pull off this heist. It all culminates to an ending that I did not see coming but is the cherry on top of an already delightfully fun movie.

Is it worth your trip to the movies? If you are a fan of Kubrick or film noir, you will get sheer joy out of The Killing.