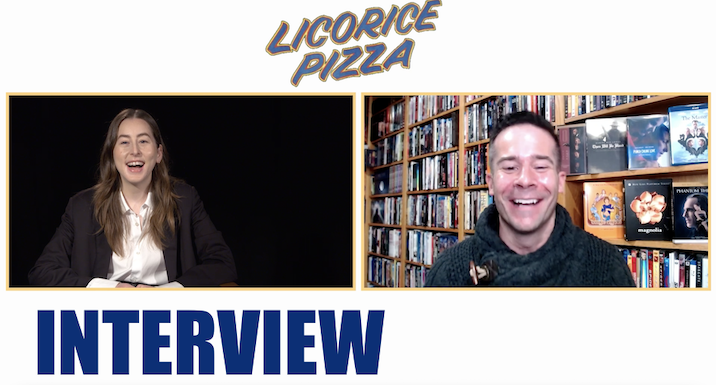 Alana Haim Interview – LICORICE PIZZA and Working with Paul Thomas Anderson Writer/director Paul Thomas Anderson has directed a few music videos for Haim, but this is the first time that Alana Haim is starring in one of his movies. She’s the breakout star of Licorice Pizza and I sat down Haim to talk about collaborating with PTA, what it was like to have her family in the movie, her take on the title, and more! I’ve had the great fortune of interviewing so many fantastic actors, writers, and directors this past year. Make sure to subscribe to my YouTube channel as next year is END_OF_DOCUMENT_TOKEN_TO_BE_REPLACED

LICORICE PIZZA Writer/Director: Paul Thomas AndersonStarring: Alana Haim, Cooper Hoffman, Bradley Cooper, Sean Penn, Benny Safdie, Christine Ebersole, Maya Rudolph Paul Thomas Anderson’s films aren’t for everyone. They strike a chord to varying degrees depending on the ride you want to go on and whether you want to film to make complete sense or just be a frothy silly ride of being something different. His new film Licorice Pizza is on the lighter and goofier end of his work. Cooper Hoffman makes his film debut here as Gary, a child actor who sees himself much older and wiser than he actually is at the age END_OF_DOCUMENT_TOKEN_TO_BE_REPLACED