THE HARDER THEY FALL Director: Jeymes SamuelStarring: Jonathan Majors, Idris Elba, Regina King, Zazie Beetz, LaKeith Stanfield, RJ Cyler, Edi Cathegi, Damon Wayans Jr., Danielle Deadwyler I knew from the first moment I saw the trailer for The Harder They Fall that I would love it. As a young boy, Nat Love witnessed the death of his parents at the hands of an outlaw named Rufus Buck (Idris Elba). That event would forever scar Nat and now as an adult he’s formed the Nat Love Gang. He’s now played by Jonathan Majors (Loki, Lovecraft Country). The Nat Love Gang is one of a few rival END_OF_DOCUMENT_TOKEN_TO_BE_REPLACED 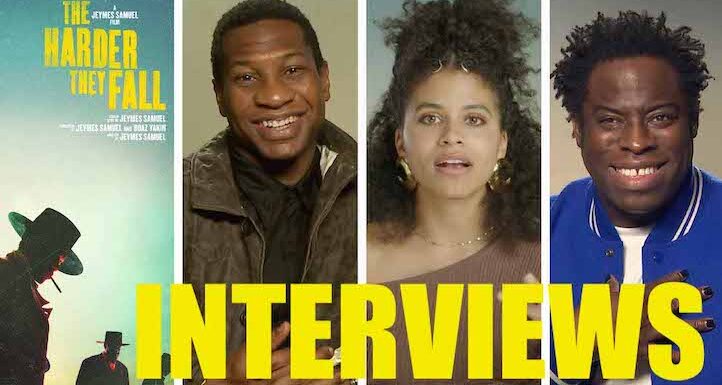 THE HARDER THEY FALL Interviews – Jonathan Majors, Zazie Beetz, Jeymes Samuel Writer/director Jeymes Samuel has an all-star cast for his new film The Harder They Fall. This is not your ordinary western! I sat down with Jonathan Majors (Loki, Lovecraft Country), Zazie Beetz (Joker) and Jeymes Samuel to talk about their exciting new film. The film is now in select theaters and will be streaming on Netflix, November 3. I have a few new interviews coming that I’m really excited to share. Make sure to Like the video with the thumbs up button and click SUBSCRIBE for more reviews and interviews! END_OF_DOCUMENT_TOKEN_TO_BE_REPLACED

JOKER Director: Todd PhillipsStarring: Joaquin Phoenix, Robert De Niro, Frances Conroy, Zazie Beetz, Bill Camp, Shea Whigham, Marc Maron Joaquin Phoenix joins the illustrious list of actors have have left a lasting impression as the Clown Prince of Crime. In Joker, he stars as Arthur Fleck who makes a living as a professional clown. He has aspirations of being a stand up comic on a late night talk show. He has good, innocent intentions but he just isn’t funny. He’s continually beat up for just being different and takes shelter by living with his mom (Conroy) in a small apartment. The trauma continues as he END_OF_DOCUMENT_TOKEN_TO_BE_REPLACED

DEADPOOL 2 Director: David Leitch Starring: Josh Brolin, Josh Brolin, Morena Baccarin, Zazie Beetz, Brianna Hildebrand, Julian Dennison, Stefan Kapicic, Leslie Uggams The 2016 release of Deadpool changed the game for superhero movies by presenting an R-rated, ultra-violent character. It wasn’t the first time Ryan Reynolds played Deadpool, but this was the approach fans wanted after the abysmal X-Men Origins: Wolverine in 2009. It raked in massively at the box office and proved to be the best role for Reynolds to date. In Deadpool 2, Wade Wilson has seen better days being his foul-mouthed mercenary alter ego Deadpool. The job never ends, but it won’t END_OF_DOCUMENT_TOKEN_TO_BE_REPLACED