Movie Review: INSIDE OUT 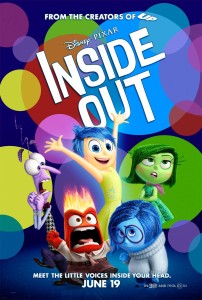 The last time writer/director Pete Docter, composer Michael Giacchino, and Pixar teamed up they brought us Up in 2009, and I was a puddle within the first fifteen minutes after sobbing so hard. I wasn’t that big of an emotional wreck this time around, but Inside Out is the best animated movie since then. Big claims, I know. At the tender age of 11, Riley (Dias) is forced to move from small town Minnesota to San Francisco, CA. It’s not an easy move, as she has to leave behind her friends and her hockey team. Everything about San Francisco is weird, right down to the pizza toppings. Inside Out takes us inside Riley’s emotions and how they shape her everyday life in adjusting to this big move. Her main emotion, Joy (Poehler), works extra hard in Headquarters to keep the other emotions: Anger (Black), Fear (Hader), Disgust (Kaling), and Sadness (Smith) in check when Riley starts to feel homesick.

What is it about Pixar and Disney that turn us into kids again for the short time we are in the theater? I sat there with my 3D glasses on and jaw open in awe of the wildly imaginative world Docter and co-writer and director Ronaldo Del Carmen (Ratatouille) came up with in visualizing our inner thoughts and voices. It’s almost as if this idea is too smart for kids, yet their creations and inventive ways seem easy for kids to grasp onto. I don’t have kids yet, but it seems like a good training model for parents when it comes to explaining how our emotions play out. The adventure of the film comes when Joy and Sadness are separated from the rest of the group and how Joy has to overpower Sadness and help show her the way.

Their journey to find their way back to Headquarters leads to a variety of places and people in Riley’s head including the islands of personalities, her old imaginary friend Bing Bong (Kind), what it means to have a core memory, short term memory, and so forth. You have places like Imagination Land and Abstract Land along the way, and naturally, the Train of Thought can take you there. Of course, it only runs when you are awake. I was mesmerized by every little detail and thought Docter and Del Carmen came up with along the way leading the audience through the wild ride of emotions that Riley is going through as well. I haven’t seen an animated film depict the human brain so creatively to make it accessible to a young audience without it feeling too childish. Pixar and Disney bring such depth to their material to make it enjoyable for any moviegoer of any age. There are ideas and concepts for adults that will surely go over a kid’s head. I personally got a kick out of Joy and Sadness coming across two other workers that are dealing with the balls of memories that are taking up too much space with the names of dolls, presidents, and lyrics to jingles.

It’s rare when a voice cast in an animated film feels like a true ensemble, especially knowing they all record their voices separately. You may have some standouts here or there, but Inside Out feels like Shrek and Toy Story where you feel like the film was written with these actors in mind and the script was catered toward their personalities. I often wonder how much of it is rewritten once the actor comes in to record their work. I can’t think of a better cast for these characters. Lewis Black is best known for being a loud and disgruntled stand up comic. He is the perfect choice for Anger. He’s an absolute riot whenever he explodes and flames bolt out of his head. I feel like that is how Black feels during his standup routine. The voices of Fear and Disgust are instantly recognizable by Bill Hader (“Saturday Night Live”) and Mindy Kaling (“The Mindy Project”) who are both hot comedians right now. Hader is quite fun whenever he gets to freak out.

I was beginning to wonder what Phyllis Smith has been up to now that “The Office” has concluded it’s run. She was always so underrated on that show. As Sadness, she gets to lay on the Debbie Downer routine so thick that it feels odd to laugh at such a sad character. On the other end of the spectrum in terms of character energy is Amy Poehler’s Joy. If you’ve seen her work as Leslie Knope on “Parks and Recreation”, you have an idea of her character. She’s the ultimate optimist that will cheer you on and always strives for the best outcome in any situation. Do I even need to say that she is also hysterical and the quintessential Poehler that we all love? Every actor seems to have been given free range to be their best self and put their precise stamp on these characters.

Pixar knows how to tug at all of our emotions. At the heart of this story, it’s about a young girl who is trying to find happiness at a point in her life when it is the hardest. It sounds like a sad movie, but like I’ve mentioned before, they treat it with such humor at the same time. Pete Docter was inspired by his own daughter’s emotions going through the same situation when he left Minnesota and moved to California. He moved me with Up and he has done it again by tackling this story. Like most Pixar films, it’s honest, personal, funny, and you will most likely cry. It reminds you of the magic and world that animation can bring to the silver screen and the power it has to move any moviegoer.

Is It Worth Your Trip to the Movies? I can’t imagine seeing a better animated film this year.