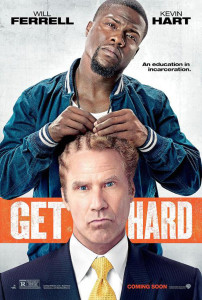 Do you ever wonder how some movies get pitched to studios? You sit through a terrible movie with almost zero redeeming qualities and you question who green lit it? I feel like the pitch was “Will Ferrell and Kevin Hart in a buddy comedy”. SOLD! Sure, that pitch has promise. Both are funny comedians that can bring in box office gold. The studio heads must not have heard the actual premise in the pitch meeting. Ferrell plays James King, an extremely wealthy hedge fund manager who seems to have everything in life. He has a gorgeous young fiancé (Brie), huge mansion, gardeners, and maids. His boss (Nelson), who also happens to be his fiancés father, has recently made him a partner at the firm.

Kevin Hart’s Darnell owns Hollywood Luxury Bubbles, which is a car washing company, located in the basement of the same building James works in. He has ambitious goals to expand his company and move into a better home for his family. They live in a low-income neighborhood and his daughter attends a school with metal detectors at the entrance. It’s the polar opposite to the life James leads. James’ cozy life comes crashing down when he is arrested for fraud and embezzlement. He has thirty days before his prison term starts and has no idea what to expect. He turns to his new friend Darnell for help. James believes Darnell has spent time in prison and can tell him what to expect. Darnell takes James’ offer of $30,000 and puts him through a prison survival boot camp.

If you have ever seen a Will Ferrell or Kevin Hart movie, you probably have an idea of the kind of obnoxious characters they play here. Hart continues to play the high-pitched, loud-mouthed, fast talking wise guy that he plays in every movie. He has starred in numerous films over the last few years, and I can’t honestly say that I am a fan. I did enjoy About Last Night, where I felt like he was actually playing a character and not relying on his shtick. Like Hart, Ferrell can be funny when he’s actually playing a character like Ron Burgundy or Buddy the Elf. In this movie, he’s just playing an obnoxious “rich white guy”. If you are Hart fan, you will probably laugh at a majority of his antics here. Ferrell fans may be more disappointed as this “character” is by no means as original as the ones we’ve seen from him before.

I think the audience is supposed to go in expecting a stupid comedy, which is a paradox we seem to be accustomed to with this genre. I have no problems with “stupid comedies”. I gave positive reviews to Neighbors, 22 Jump Street, and other Will Ferrell movies, but this is one of the stupidest, laziest, and offensive comedies I have seen in a long time. It is a completely wasted opportunity for the talents of Hart and Ferrell. The writing team of Etan Cohen (who also serves as director), Jay Martel, and Ian Roberts rely far too heavily on stereotypes and racist/homophobic jokes. There are many tasteless jokes and bits that are repeated over and over and over again. I am by no means a prude nor am I overly sensitive, but I was just taken by surprise at how low and bottom of the barrel they kept going with the material. There is a running gag about the fear of being “prison raped”. It’s one thing to reference it once or twice, but it gets very old and stupid at how many times this idea gets brought up. It goes so far that there is a scene where Darnell takes James to a gay hook up location to find someone to teach him how to suck dick. REALLY? How is this funny?

Right from the beginning of the movie, there are many scenes that play into stereotypes and images associated with the two characters, which in turn feel racist. When James first meets Darnell, Darnell approaches him outside his car at the car wash and James just assumes he’s going to be robbed because he’s black. James also approaches Darnell about prison life because he assumes Darnell’s been to jail because 1 in 3 black men go to jail. At first Darnell is offended, but gets over it quickly by a $30,000 job offer. There are also scenes involving gangs where every member carries a gun and the guys find themselves caught in the middle of a white supremacist group.  You also have Ferrell dressing like Lil Wayne in order to fit in.

The ending is worthy of a couple of chuckles when Ferrell and Hart’s characters are finally in a showdown and are completely out of their element. By this point, those few chuckles don’t save the rest of the garbage I had to sit through. Was this movie supposed to be satire? Was it supposed to be a commentary on the labels we unjustly add to these types of characters? If that was the intention, it wasn’t smart enough or clear enough to get that point across. Will Ferrell and Adam McKay (Anchorman) produce the film which adds another frustrating element to it. I really expect more out of them and wonder why they felt the need to get this film into production. Maybe they wanted to make a modern day Trading Places.  That classic Dan Aykroyd/Eddie Murphy movie is hysterical, and I feel guilty even associating it with this movie. Ferrell and Hart don’t need to waste their time on this cheap material. I found it disturbing that other audience members were actually laughing and thinking it was comedy gold. I find it to be an embarrassment to the comedy genre.

Is It Worth Your Trip to the Movies? There are better Will Ferrell and Kevin Hart movies out there. Don’t support this atrocious material.

RATING: ½ out of 5 TICKET STUBS