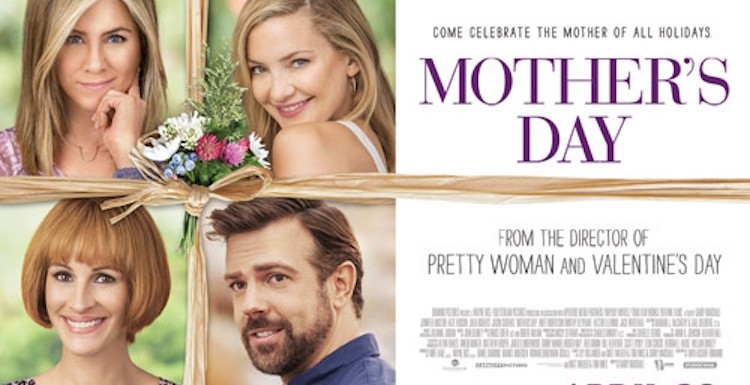 I hate watching bad movies, but I sure do love writing about them. Such is the case for Mother’s Day. Long-time comedy director Gary Marshall continues his “holiday” themed movies with Mother’s Day, which follows Valentine’s Day and New Year’s Eve. It’s another ensemble film with many intersecting storylines and one little twist along the way. Those other films had boasted a huge cast of A-listers. I had gathered by this film’s poster that maybe Mother’s Day would not feel so bloated and useless as we’re only seeing four actors featured as the face of the movie. Wrong. It’s still a mess. Jennifer Aniston has one of the better storylines as single mom Sandy who feels like she is in competition with her ex-husband Henry’s (Olyphant) new and much younger wife. On the other end of the spectrum is the obnoxious and blatantly not funny plot with Kate Hudson who plays, Jesse, who is covering up her marriage to an Indian man (Mandvi) from her racist and homophobic parents played by Margo Martindale and Robert Pine. To further complicate this family dynamic is Jesse’s sister, Gabi (Chalke), who is also covering up her marriage to her wife. Then there’s Julia Roberts showing up for minimal screen time as Miranda, a Joy Mangano type celebrity who has created a jewelry line and now sells it on HSN. Miranda is another edgy, cold-hearted character we’ve seen countless times before from Roberts. She easily could have been cut from the movie, but she’s buddy buddy with Gary Marshall so she’s basically just pulling in a favor for a friend.

The film was written by Matt Walk, Tom Hines, and Anya Hochoff Romano, which probably explains why the men actually have the better storylines in the movie. Jason Sudeikis is continuing his post Saturday Night Live venture on the big screen. He plays Bradley who is coping with being a new widower and single father. He has a hard time knowing how to raise their two daughters. Another one of the “better” subplots involves British actor Jack Whitehall as a struggling stand-up comedian who wants to marry his girlfriend and mother of his child. The catch is that Kristin (Robertson) is too hesitant about the concept of marriage based on her own personal issues. There’s actually depth and stakes involved with the Sudeikis and Whitehall characters, which can’t be said for a majority of the movie. In case you were curious about why Mother’s Day is involved, the various characters all struggle with the looming reminder that Mother’s Day is right around the corner and what that means for them as moms, daughters, or how to play the maternal role in their family.

Director Garry Marshall has created some memorable films that have stayed with us for years like: Beaches, Pretty Woman, or even The Princess Diaries. He’s also had some major bombs like Exit to Eden. Mother’s Day falls into the latter category. Like his other holiday movies, there are far too many characters and storylines and many do not work. At its core there is a horribly written script with clichéd characters and many failed attempts at jokes that do not land. I have no problems with light-hearted rom-coms as I can easily suspend reality and fall for some of the cheesiness involved with Valentine’s Day. I never saw New Year’s Eve, but I heard it was even worse. This really is rock bottom for Marshall, as so much of the movie feels phony. All of the characters live in rich, fancy houses yet somehow don’t work and can just talk about working out, mommy and me play dates, and acting competitive with the other moms in the neighborhood. Yes, this is a supposed to be a light-hearted comedy but where’s the reality behind it? These aren’t the moms I know. Where are the mom characters that are busting their asses to make sure food is on the table? Where are the moms helping their kids with homework? Where are the moms standing up for their kids getting bullied? Where are the unsung hero moms? There are none in this movie.

One storyline stands out the most and not for the right reasons. This is the Kate Hudson one involving the racist/homophobic parents. It is downright cringe-worthy and not in a dramatic way. While I believe this happens to many families, it’s played for cheap laughs instead of addressing a serious situation. Far too many people go through this exact situation to treat it as laugh it up schlock when the parents arrive with a surprise knock on the door. It could be deemed offensive to anyone that wants to come out to his or her parents but faces fear of their rejection.

It should be fun to see Julia Roberts and Jennifer Aniston share the screen together, but by that point, I was too frustrated to care about it. I question why any actor would want to take on this sort of movie. Was there something in the script that I missed? I can’t believe I just questioned if I missed something in the script. Of course, I didn’t. The only conclusion that I can come up with is that it is an easy paycheck and the ability to work with Garry Marshall. I can see the appeal, but this is just a low point for everyone involved.

It’s been a few days since the screening I saw, and I’m continually baffled and frustrated with this movie and the reaction it received from the rest of the audience. Many of them were laughing when I was scowling. I heard people claim they loved it when they walked out yet I hated it. You shouldn’t have to be a mom to like a movie called Mother’s Day, but there’s a patronizing tone for someone like me as if I wouldn’t “get it” or “like it” because I’m not a mom. I have taken my mom to quite a few movies in the past for some quality mother/son time, but Mother’s Day is not one I would want to subject her to. I can think of plenty of other films to enjoy with her.

Is It Worth Your Trip to the Movies? How could a movie that should celebrate moms go so horribly awry?