Let me get this straight. Seth Rogen plays a pot smoking guy looking to reclaim his youth. Zac Efron plays a ridiculously chiseled college guy. These are some bold casting choices. Mac (Rogen) and Kelly (Byrne) Radner have moved into a warm neighborhood with their new baby girl and are looking forward to the next stage of their lives. They see a young gay couple moving in down the block and think they have really found the right neighborhood for them. That joyous feeling comes to an abrupt end when they see a fraternity move in right next door. They attempt to get on the boys’ good side by introducing themselves as the cool neighbors and offering frat president Teddy (Efron) and vice president Pete (France) some pot in an exchange for them to “keep it down” once in a while. Mac and Kelly attend the boys’ first party where Mac partakes in all of the debauchery. A promise is made between both parties that if it’s ever too noisy that the Radner’s will call Teddy first before calling the cops.

With each passing night, the parties are getting bigger and the noise is getting out of control. They try to call Teddy to “keep it down”, but no one seems to be answering over at the frat house. What a surprise. The Radners have no choice but to break their promise and make an anonymous phone call to the cops for a noise complaint. It should come as no surprise that the cops rat them out to Teddy and Pete. The breaking of the promise leads to an all-out war between the Radners and the boys at Delta Psi Beta. Outrageous pranks ensue as the Radners hope to get the boys kicked out of the house, while the boys remind them who rules the neighborhood.

If you are looking for a clean wholesome comedy, Neighbors is not for you. When a movie stars Seth Rogen and frat boys are involved, it should be expected that the humor is raunchy, gross, vulgar, and crude. There will be copious amounts of sex, nudity, drinking, and drugs. Director Nicholas Stoller (Forgetting Sarah Marshall, The Five-Year Engagement) and screenwriters Andrew J. Cohen and Brendan O’Brien know what kind of movie they are making and push the boundaries of comedy and decency to the extreme. There are shocking moments and gags where you wonder if they have gone too far. If you are sensitive to this type of crass humor, you will definitely feel like they have crossed the limits. There is a very loose feeling at times to its structure, and it’s very evident that there was a lot of improvisation happening as the camera was rolling. Zac Efron (That Awkward Moment) and Dave Franco (21 Jump Street) have mentioned in interviews that improv was encouraged and that five writers were always watching the monitors giving new jokes and lines with each take. Some scenes and transitions feel a bit choppy. I give Stoller credit for showing some restraint when it came to the execution of the jokes and gags. These types of dumb comedies can tire quickly if the pace isn’t kept up and if the gags are played to death.  I have seen far too many comedies lately, ahem Anchorman 2: The Legend Continues, where the jokes go on for too long and the movie is thirty minutes longer than it needs to because they are too impressed with their writing and don’t know how to edit. Stoller keeps the run time in check as the movie is only 96 minutes long. I would have grown tired if it was any longer than that. You may even notice that some of the scenes shown in the trailer didn’t make the final cut. I would bet that if the movie is a huge success we may see an “unrated” release at some point and a DVD/ Blu-ray full of deleted scenes.

Seth Rogen is playing the same type of character you have come to expect from him. I think it is rare if you don’t see him playing someone that gets chemically altered at some point in the movie. He has had many on screen relationships from Katherine Heigl, Michelle Williams, and now Rose Byrne (Bridesmaids, Insidious). While it seems like an odd pairing on the outside, they have really great chemistry together. I always think of her being so prim and proper, but she gets to let loose and dive into the pranks. Her character even mentions that she doesn’t want to be that responsible and nagging wife like you would see in a Kevin James movie. She also gets to keep her Australian accent. I do wonder if they wrote that into the script before or after she got cast. 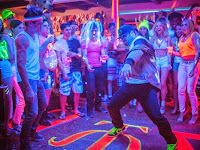 Say what you will about whatever pre-conceived notions you have about Zac Efron, but he is one of the highlights of the movie. No, it is not because of how good looking and ripped he is throughout it. As Rogen’s character states, “It looks like something a gay guy designed in a laboratory”. I think this type of comedy may be new for him, but it’s one of the few roles he has taken in his post-High School Musical career that completely fits him as an actor. While I applaud him for taking risks in past career choices, he has taken some roles that were a bit of a stretch for his type. Another highlight of the film belongs to Lisa Kudrow in a two scene cameo as the school’s dean. I would assume Stoller let her improv her way through a majority of her stuff as it’s very much a Kudrow creation.

I have seen quite a few frat themed movies like Old School and Van Wilder. None of them can hold a candle to the quintessential frat movie that is National Lampoon’s Animal House, which is one of my favorite comedies of all time. I was pleasantly surprised that there is more to Neighbors that just a bunch of young men partying and causing a ruckus for 96 minutes. There is the underlining idea that you can’t partake in wild shenanigans every night for the rest of your life. You eventually have to grow up, get a job, and deal with adulthood. There are so many joys that come with being married and having a new baby that far outweigh the ridiculous and wild nights that just turn into a hangover the next morning.  Our central characters go through this life change as Byrne and Rogen try to hold onto their youth a bit longer, while Efron and Franco’s characters must succumb to the fact that they will be graduating and have to find a job.    Neighbors will definitely attract those college aged moviegoers that are still going to frat parties on the weekend. I think it will also appeal to others, like me, who are on the Rogen/Byrne end of the spectrum. My college years are long gone, but the movie was a good trip down memory lane.

Is it worth your trip to the movies? Sometimes after a long week at work, this is the kind of silly comedy I am in the mood for. I wanted to laugh and forget about the week. Mission accomplished.