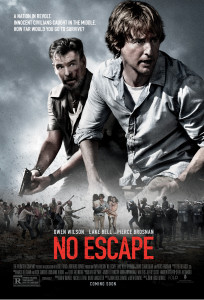 Let’s face it. We all enjoy Owen Wilson when he’s being quirky and making us laugh in films like Zoolander or any of Wes Anderson’s movies. His name isn’t usually tossed around for a high-intensity action movie involving a coup in Asia. That’s precisely why No Escape is a little bit different than you would expect it to be. Wilson is paired with funny-lady Lake Bell (In a World…) as Jake and Annie Dwyer who move their family to an unspecified country in Asia due to his work siituation. He seems fairly excited for this new adventure, but you get the impression she feels like she was forced to pack up and leave. Their first day takes a bit of adjusting, as there’s no television or Internet at their hotel or anywhere else in the city. They happen to make friends with Pierce Brosnan’s Hammond who has travelled there many times before and knows the city quite well.

Their new life comes crashing down on them when a coup develops in the streets with rebel leaders battling cops and gunning down foreigners. Jake literally finds himself stuck in the middle of the action when he’s out strolling the street vendors. The only thing on his mind is to get back to the hotel and get Annie and their two daughters (Geare, Jerins) to safety. The Dwyers find themselves in a no-win situation as they attempt to stay ten steps ahead of their adversaries.

No Escape is the latest from The Brothers Dowdle. They are probably best known for their work in the horror genre with Quarantine and The Poughkeepsie Tapes. John Erick serves as the film’s co-writer and director, and his brother Drew produced it and co-wrote it. Their background with those films serves them well as this film is absolutely terrifying if you begin to think about what would happen if your trip overseas goes terribly awry. The story is set in an unspecified location in Asia but near the border of Vietnam. John Erick Dowdle came up with the idea for the story after a trip he took with his dad to Thailand when a coup occurred there around the same time of their trip. They purposely decided not to name the location the film is set, and they are now receiving some criticism for that choice.

Right from the opening sequence, the Marco Beltrami score instantly sets the mood and buckles you in for one hell of a ride that never lets up. Cinematographer Léo Hinstin keeps the camera free and loose focusing more on the reactions of the family to what is going on versus showing too much of the carnage. The Dowdles are keen on keeping this about the family versus the coup. They know how to keep the suspense up, and my heart skipped a beat multiple times. As the battle carries on, they put the family in situations that go from bad to worse. Just when you think it couldn’t get worse, it does. There are moments where you really question just how far they are going to take each scene. There’s a scene involving the family jumping from one building to the next. It’s perfectly executed as you really wonder if they are going to “go there” or not. There’s another scene at the end that makes you go through that heavy thought process all over again.

There are moments of reprieve as the Dowdles take advantage of their actors who are known for their comedic sides. Wilson and Bell are smart casting choices when you think about it. They have great chemistry together and feel like your average family who would feel completely out of their element and at a loss if caught in this situation. You would typically find this kind of role given to the likes of Vin Diesel or Liam Neeson who you expect to kick butt and make it in the end. Their young daughters are played Clare Geare and Sterling Jerins who are both gutsy and have sisterly warmth together. Pierce Brosnan has a small, but vital role as that crazy tourist we have all encountered. He’s a bit wild and comical at the same time. The Dowdles have written some good banter between him and Wilson.

Not every moment and situation in No Escape is completely realistic. The Dowdles definitely push the boundaries with certain scenes. You’ll be disappointed if you look for rich character development or if you’re looking for a political debate about a coup and how it affects the citizens of that country. This film is purely focused on the family and their attempt to survive. It’s a 103-minute adrenaline rush that really puts the fear of travel of you. Hopefully, you’ll grab the edge of your seat and go along for the ride.

Is It Worth Your Trip to the Movies? Not all late summer movies are clunkers.