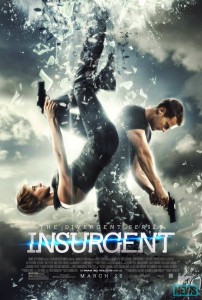 Let’s recap the world of Divergent because it can get a bit tricky. Even for someone that read the first book and saw the first movie, I felt a little confused at times. In a dystopian Chicago, the people have been split up into five sections called factions based on their aptitudes. They include: Amity (the peaceful), Abnegation (the selfless), Dauntless (the brave), Erudite (the intelligent), and Candor (the honest), plus some people that have been shunned away called the Factionless. Those like our heroine Tris (Woodley), who are strong in all aptitudes, are considered “Divergent” and are treated as a threat to the government that’s set in place by Jeanine (Winslet). Tris, her boyfriend Four (James), brother Caleb (Elgort), and friend Peter (Teller) have managed to escape Jeanine and her counterpart Eric (Courtney) by hiding out in the Amity faction. Amity’s leader (Spencer) has given them a hiding place so long as they can fit in and retain the peaceful qualities that make up their faction. Their cover is blown when Eric and his men show up looking for Divergents. Peter turns on the group by informing Eric of their whereabouts. Tris, Four, and Caleb manage to escape only to get caught up in a group of Factionless. Tris starts to learn more about Four’s past when it’s revealed this his mother Evelyn (Watts) is the leader of the Factionless.

Members of the other factions have started to form alliances and a war starts brewing between various sides. Jeanine is on the hunt for the capture and death of all Divergents after getting her hands on a precious box that holds a secret from the founders of the city. This box can only be opened by a Divergent. When innocent people and friends start dying around her, Tris decides to give herself up to Jeanine. She puts herself through grueling simulations in order to conquer her demons and defeat Jeanine’s system.

Insurgent is based on the second book in Veronica Roth’s young adult series. This genre continues to grow in popularity. While they all start to sound the same after awhile, Roth keeps her world in a slightly more realistic society with a futuristic sci-fi/action vibe to it. There are moments involving Tris’ simulations that reminded me of The Matrix. Insurgent picks up shortly after the events of the first film. You definitely need to see that film or read the books in order to understand what’s happening in this film. Unlike other second parts of a trilogy like The Hunger Games: Catching Fire or even The Empire Strikes Back, this story doesn’t stand on its own without a deep understanding of the previous events and how this society has been formed. The good thing about it being a part two is that the stakes are higher, the action scenes are far more intense, and you get a better sense of where this story is going.

My biggest issue with the first film is that it felt like it was all exposition. It felt quite slow but finally picked up at the end. Some of those pacing issues still apply here as the film starts to drag again in the middle section. Some of the action sequences and chases felt a bit repetitive after awhile. It starts off strong with a hologram Kate Winslet appearing over skyscrapers leading into Tris and the gang in hiding but only picks up again in the final act when Tris gives herself up to Jeanine and their battle against each other begins. There’s a fervor and urgency to see if Tris can make her way back out of the simulations. We also get some flashback images with her parents and more destruction of Chicago.

After two movies, I would have expected myself to be completely hooked with these characters and the world Roth created. While I find the premise of the factions and a dystopian Chicago intriguing, there’s still something missing from these movies. There doesn’t seem to be enough happening yet to warrant a full trilogy of books or four movies. Yes, like every other franchise, they are splitting up the final book into two movies. I attribute my continued interest in these movies largely due to the cast. Naomi Watts and Octavia Spencer join the ensemble that is led by Shailene Woodley, Theo James, Ansel Elgort, Miles Teller, and Kate Winslet. They are all strong actors that bring more life to their characters when the script gets melodramatic. Kate Winslet and Jai Courtney are fantastic as the film’s main villains. I have been a long time admirer of Winslet and it’s great to see her play a bitch who is solely driven by the power she believes she has over others. I personally find their characters far more interesting than the romance going on between Tris and Four. That’s not to say they are weak characters, but villains are usually more entertaining. Woodley continues to bring an edge and complexity to Tris, which is great for young moviegoers who are the film’s prime target audience. This film made me want to re-watch Woodley and Teller in The Spectacular Now and Woodley and Elgort in The Fault in Our Stars.

Insurgent isn’t a great film, but it has more going for it than its predecessor did. The final act with its cliffhanger ending makes up for its slower moments. It has the kind of shocker ending that really makes you curious as to where the story is going to go next. I haven’t read this book yet, but I may have to dive back in again and finish reading the series before The Divergent Series: Allegiant Part 1 opens next year.

Is It Worth Your Trip to the Movies? I don’t think it will appeal to a larger audience base than those that have already invested in the books or first movie.