Denzel Washington is back in another high-intensity action flick. How many of these has he done lately? This time he reteams with his Training Day director Antoine Fuqua. Robert McCall (Washington) spends most of his day stocking shelves or cutting wood at Home Mart (similar to Home Depot) and is a mentor toward another worker trying to get in shape for the security position. His nightly routine involves a stop at a local diner for a cup of tea and some reading time. He’s got a list of classics that his now-deceased wife wanted him to read. It is quite clear that he has some very distinct habits and OCD rituals. He brings his own tea bag that has been neatly folded up in a napkin and he has a very specific layout to how he likes his tea, book, and spoon placed on the diner table. Every night he sees Teri (Moretz) sitting at the counter. She is a young prostitute working under Russian gangsters. They form an unlikely friendship, as he seems to be the only male figure in her life that she can trust and doesn’t want her for sex. 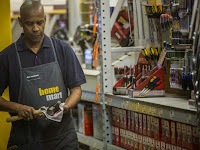 One night when she doesn’t show up, Robert learns the men she works for have beaten her up. He goes to the hospital and witnesses the bloody aftermath they have left her in. We don’t necessarily know his background, but he feels the need to become the vigilante and go after the men who beat her. He shows up at their restaurant hangout and executes them all in a perfectly timed out attack. After his methodical approach to his plan of attack, we know this is not his first time taking down a gang. Robert’s initial kill is only the beginning as he uncovers a whole web of corruption, money laundering, and police involvement.

The film opens with the Mark Twain quote “The two most important days in your life are the day you are born and the day you find out why.” For Robert McCall he was born to seek justice however he sees fit. Whether its threatening two cops who are stealing money from a family restaurant or some punk robbing the Home Mart, he will hunt them down and make them pay for their actions. A movie centered on a main character that acts like a vigilante does not have the most creative premise as we’ve seen plenty of movies like this before. I’m willing to forgive that little factor.

Who better to play this calm, cool and calculated man with a past than Denzel Washington? He is a powerhouse force that keeps you intrigued with a character who is more than just a killing monster. The film takes its time setting up his character and psyche. There is plenty of time devoted to his OCD like ways and the relationship he builds with Teri. Once her attack happens, he switches to hero mode and the movie really takes off. You always know he’s going to be one step ahead of everyone else and you expect him to be lurking in the shadows ready to pounce. The fun comes in as you try to anticipate his next move and mode of execution. We may not see all of his kills, but we are left with some evidence that he got the job done. There is something even more shocking when the reign of terror is left to our imagination, but since he’s the good guy we feel a bit more justified toward his actions. While Washington is a great casting choice, I feel like he can do these movies in his sleep. He was so gut-wrenching in 2012’s Flight that I would love to see him get back to those types of roles.  Chloe Grace Moretz felt more at ease here than she did in Carrie or If I Stay. She seems to fare better in supporting roles than having to carry a whole movie. Popping up very briefly are Bill Pullman and Melissa Leo in minor roles. I swear Melissa Leo shows up in the most random of movies under some wig for all of ten minutes. I always end up saying, “Is that Melissa Leo? I had no idea she was in this.”

Director Antoine Fuqua (Training Day, Olympus Has Fallen) and screenwriter Richard Wenk (The Expendables 2) have based their film on the television series of the same name that ran from 1985-1989. I have never seen the show before, but I am pretty certain that it is nowhere near as gruesome, violent, and out-of-control this film is in comparisons. I would like to think that Fuqua knew going in that they were going to have to have some fun along the way and that they couldn’t take themselves too seriously with their approach to this story. The violence is so over-the-top at times that it felt like a slasher film in its execution. Who are we dealing with here? Denzel or Jason Vorhees? There was unnecessary blood splatter and anything with a sharp edge became a weapon to inflict pain. Consider this your warning if you get queasy. You may need to turn your head during the no holds barred ending. I, for one, was able to suspend reality and go along for the ride.

Is It Worth Your Trip to the Movies? If you go and just want to have a fun time, it will succeed at that.