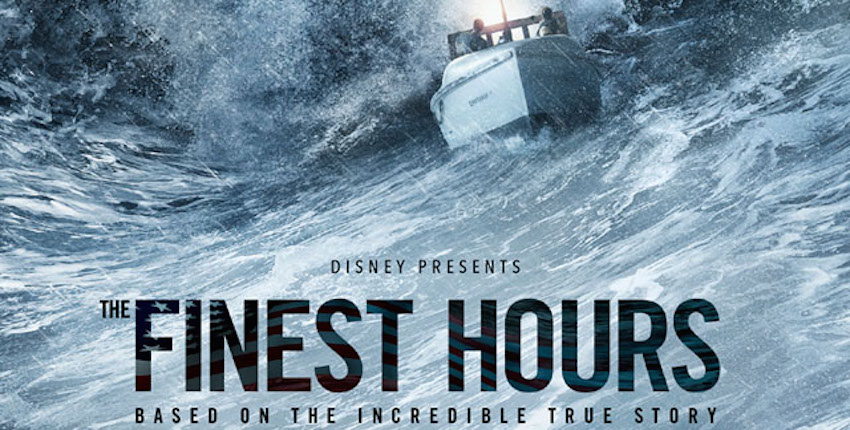 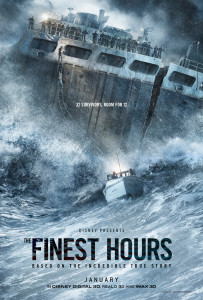 Disney is no stranger at taking true stories and attempting to turn them into inspiring movies. They’ve done that with many underdog sports films (Remember the Titans, Miracle, McFarland, USA…) Their latest is focused on the 1952 Coast Guard mission that is considered to be one of the greatest and most daring rescues to date. The SS Pendleton was an oil tanker caught in the middle of a huge storm off the coast of Cape Cod. The gale force winds whipped through at 50-60 miles per hour and struck the tanker completely splitting it in two. As the senior officer and chief engineer, Ray Sybert (Affleck) tries to rally the crew in order to get them to work together when many of them would rather jump ship and risk it out on life boats. News of their tragedy spreads to the Coast Guard and Bernie Webber (Pine) risks it all by taking a small crew in a motor boat out to rescue them.

If you’ve seen any of these Disney true story movies, they all start to feel the same after a while. It becomes quite predictable with stock characters and bad dialogue all leading up to its feel good ending. If you’re worried I just spoiled the ending, did you really think that Disney would produce a family friendly movie with a tragic ending? Every year they crank these films out in the slower box office months. The film has the writing team of Scott Silver, Paul Tamasy, and Eric Johnson working off the book of the same name by Casey Sherman and Michael J. Tougias. Oddly enough the screenwriters are the same three that wrote David O. Russell’s film The Fighter which is about as 180 as you can get from this movie. Without having read the book, I would like to assume that there is some heart, back story, and drive in it that compels the reader to find out how it all ends. None of that is evident in the script. Instead the screenwriters seem to have taken the standard Disney rubric for these types of movies and have changed some names and locations to fit this story.

The script doesn’t give any bond between the members of the coast guard or the tanker leading to a lack of real emotion throughout the movie. If it was supposed to be about the brotherhood between them, then it wasn’t strong enough. The crew of the Pendleton seemed like a bunch of selfish men who were all too quick to bail when the going got tough. The only backstory in the movie is given to Chris Pine’s character, Bernie Webber. The film opens with his character going on a blind double date with Holliday Grainger’s (Cinderella) Miriam. In the very next scene a year has passed, and the two of them are engaged. Miriam spends the rest of the film worrying if Webber will make it back alive.

The acting is all over the place with Chris Pine playing it very safe and earnest in the hero role. Working along side Pine are Eric Bana as the commanding officer in charge of the Coast Guard and Ben Foster as another crewmember. Bana’s Massachusetts accent is a bit shaky, and Foster isn’t given much to do except pretend to be the Robert Shaw of the movie. Casey Affleck seems very out of place for someone who typically takes smaller indie dramas. I suppose he needs to take a big budget paycheck to offset the smaller ones. I applaud home for trying to give his one-dimensional character some depth.

Disney brought on director Craig Gillespie who also helmed their underdog baseball flick Million Dollar Arm from 2014. It feels like everyone involved is trying way too hard to tug at our feelings, but they’re going about it in all of the wrong ways. There’s even an over abundance of the score to try to carry it along. I was shocked to learn that it was from Carter Burwell. He’s an Oscar nominee this year for Carol, yet there is nothing new or interesting here to give them film any shape. The film has also been converted to 3D during postproduction, which completely ruins the special effects. It gets hard to watch due to how dark and fast paced the action gets when the storm hits and destroys the ship. The Finest Hours could have been a daring, edge of your seat thrill ride showcasing the valiant efforts of the men involved. Instead it’s a safe and easy ride to the happy ending you already knew was coming.

Is It Worth Your Trip to the Movies? Go and do some research on the Coast Guard and what their mission is instead of seeing this.