A drug “smuggling” road trip movie whose characters are on the run from their Mexican drug lords. I feel like I’ve seen this before. Oh wait, I’m sure I have. David Clarke (Sudeikis) is that guy we all know that has never really grown up. He’s not married, has no kids, and lives in a bachelor style apartment. David is also a well-known marijuana dealer. His iPhone is constantly going off and has his supply fully organized and stashed away. I always like someone that is well organized. It is not too long into the movie when he is completely robbed of his weed and the tens of thousands of dollars he had with it. 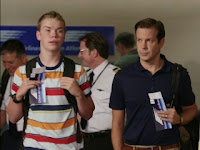 He must fess up to his dealer Brad Gurdlinger (Helms) that he no longer has the money he owes him. Brad offers David an ultimatum as a way to repay him his debt. Brad tells David to cross the border into Mexico to smuggle back a “smidge and a half” of marijuana. David has no choice but to go along with the plan. He comes up with the idea of posing as a family in a RV in order to breeze through border patrol. Who would suspect a happy-go-lucky-ain’t-life-grand type of family of bringing drugs back into the country? David has no family so he decides to form one by bribing some of his neighbors. Rose O’Reilly (Aniston) makes her living as a stripper but is being evicted from her apartment. She sees no choice but to take David up on his offer as she desperately needs the money. Kenny, the dorky kid next door (Poulter) tags along as he has nothing better to do and wants to score some weed from David. To round out the family is Casey (Roberts), a pierced and tattooed runaway.

The newly formed Miller family heads out on the open road. Their stop inside the compound to pick up their “smidge and a half” is highly guarded with rifles pointing in every direction. The exchange goes rather smoothly despite the fact that the “smidge and a half” turns out to be enough pot to fill every nook and cranny of the RV. They get stopped at border patrol but ease on through after the under vehicle check. For the faux Millers this slight altercation turns out to be the least of their worries. What would a drug smuggling road trip movie be without some other hijinks and crazy characters along the way?

I have mentioned it in reviews past, but I get leery whenever I see more than one or two screenwriters listed in the credits. We’re the Millers boasts FOUR writers. I highly doubt that they all sat in a room together and came up with this script. It is by no means original, and frankly, it is not all that funny. One would think that with four writers the jokes and zingers would just come flying out of each actor’s mouths. There are some good laughs to be had, but I was not busting a gut every time Sudeikis delivered a line.

I sometimes wonder why editors leave the funniest moments and punch lines for the blooper reel. Some of the best laughs of the movie come in the blooper reel. It set in stone the reason why this movie semi-works. This cast is able to take a weak script and run with it themselves to get some laughs out of it. Nick Offerman and Kathryn Hahn (both from TV’s “Parks and Recreation”) pop up as another RV riding Christian family that the “Millers” meet along the way. They are always funny no matter what project they do. You may not know the name Kathryn Hahn but you will probably recognize her. Another stand-out is British actor Will Poulter as Kenny. He is definitely not afraid to do anything for a laugh. The movie does have an interesting take on the idea of getting to know strangers and not judging the book by the cover. I must admit, the ending did take me by surprise. I assumed I knew what was going to happen within the first half hour, but I am glad that I was wrong. The movie is not terrible, but there are funnier pot movies out there if you are in the need for a late night high fest.