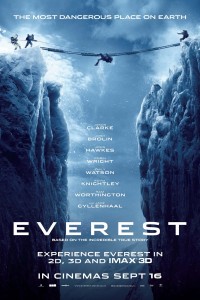 I already knew this, but Everest has now confirmed that I have no desire to go climb Mount Everest or any other summit like that. In 1996 two expeditions attempt to make their way to the top of Mount Everest. Jason Clarke plays Rob Hall, an expedition leader based out of New Zealand who is bringing a group of amateur hikers up with his company Adventure Consultants. Texas pathologist Beck Weathers (Brolin) and journalist Jon Krakauer (Kelly) were two members of his crew. As the conditions start to become severe, he turns to Scott Fischer (Gyllenhaal), who is leading the other group of explorers named Mountain Madness, to combine their groups. Their joint effort seems useful until a massive snowstorm comes along and threatens their entire chance of making it to the top and risks their survival at such high altitudes.

Everest is based on an incredible true story that people may be familiar with if they’ve read John Krakauer’s novel “Into Thin Air”. While this film is not told through his character, this was the expedition that led Krakauer to write his book. People may also be familiar with this story if they saw the IMAX film of the same name from 1998. Those filmmakers, including David Breashears, were on this adventure. What’s intriguing about all three versions of this story is that you can see and read about it through three different perspectives which I can only assume differ at times.

Despite the repetitive nature of the story as we mainly watch these men and women hike and survive, it’s an edge of your seat and gripping story. You know the outcome is bleak and chances of survival are slim, but you hope for the best in the end. The story digs into the idea of what human nature is like when survival skills are tested. I appreciated that they bring up the questions of why these people are going on this journey knowing full well the dangers they will encounter. The script by William Nicholson (Unbroken, Les Misérables) and Simon Beaufoy (127 Hours, Slumdog Millionaire) tap into the backstories of a couple of characters and the families they are leaving behind. Rob Hall is leaving behind a pregnant wife (Knightley) and Beck Weathers had a wife (Wright) and children back in Texas. Robin Wright (“House of Cards”) is simply heartbreaking in her few scenes and makes it quite clear that her character was at the end of her ropes as she watched her husband continue to take on these expeditions despite the toll it was taking on their family.

The rest of the all star cast including: Josh Brolin, Jason Clarke, Jake Gyllenhaal, Emily Watson, John Hawkes, Michael Kelly, and Sam Worthington had to bear the elements while shooting. It was partially filmed in Nepal at the base camps of Mount Everst to make the experience as realistic as possible. Yes, a green screen was obviously used, but director Baltasar Kormákur (Contraband) put his actors through grueling filming conditions. It’s impressive work from everyone involved to want to tackle this sort of experience and tell this story. Like Robin Wright, Jake Gyllenhaal and Keira Knightley are standouts. Gyllenhaal is having another great year. His character here is a bit of a hippy, always relaxed and ready to have too much too drink despite what he’s facing. It’s vastly different than the violent nature of his character in Southpaw. Knightley spends most of the movie by herself leading to tense phone call scenes. She definitely belongs in the Viola Davis school of acting and crying your face off at the same time.

Everest is a harrowing type of experience. You know going in that this will most likely not come out all sunshine and roses for many of our characters. It’s an intense ride thanks to the stunning cinematography by Salvatore Totino. He attempts to capture the large-scale dilemma they faced by the many overhead shots that look straight down into a never-ending crevice and the close up shots of the rickety ladders and ropes that are used. There are moments that will no doubt make you queasy and cling to your chair if you have any fear of heights or falling. Totino also captures the beautiful elements of the area with his scenic shots pre-snowstorm. Everest is being toted an IMAX experience, and this is the kind of film that going to a large format theater is all about. It’s a man vs. nature story of the darkest kind that is fascinating and exhausting all at the same time.

Is It Worth Your Trip to the Movies? If you’re in Minnesota, pay the extra fee and see it at the Great Clips IMAX Theater at the MN Zoo. You won’t regret it.