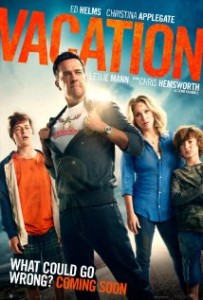 It’s been 18 years since the last Griswold family vacation in 1997’s Vegas Vacation. There’s a reason for that as that film was extremely disappointing and put a nail in that coffin. We are in a trend where franchises and series seem to be resurrected after decades away to appease the fans. I may have been in the minority in thinking that the idea of a new Griswold family vacation seemed promising. I liked the idea that it would be a sequel/reboot/meta type approach to pay homage to the classic 1983 film while taking it in a new direction. The Office’s Ed Helms plays an adult Rusty Griswold, an innocent and naïve pilot working for a budget airline. After learning that his wife Debbie (Applegate) hates their family cabin, he decides to shake things up by taking her and their two sons James (Gisondo) and Kevin (Stebbings) to Walley World in order to recreate the vacation he went on as a kid. As you can imagine, their “holiday road” trip does not go to plan. They makes stops at Debbie’s old sorority, his sister Audrey’s (Mann) house, and other locations that seem to test the family’s limits.

When you look at this cast, it seems like a great match. Each Vacation movie had different actors as Rusty and Audrey. Helms follows in the footsteps of actors like Anthony Michael Hall and Johnny Galecki. He does a fine job of modeling Rusty after Clark. He captures many of the vocal cadences and mannerisms that Chevy Chase had used before. There’s an “aw-shucks” type feeling as he’s a bit naïve, but tries his best to please and do what’s best for his family. Christina Applegate joins the family as his wife, Debbie. We learn that Debbie is not quite the wholesome angel that Rusty thought she was and her past plays for some fun moments between them. I love that she is game for any sort of gag or laugh.

The rest of the Griswold clan is present, but only for a brief time. Due to the road trip structure, we only get about fifteen minutes with sister Audrey played by the always funny Leslie Mann. Chris Hemsworth plays Audrey’s husband, a gorgeous and well-endowed weatherman. Hemsworth proves that he’s more than just Thor as he shows off his comedic side quite successfully. Chevy Chase and Beverly D’Angelo pop up again as Clark and Ellen. Their scene is one of the better ones only because it makes you feel nostalgic for the old movies. Unfortunately, it’s all too brief and basically used as a gimmick. Chase gets about five seconds to fumble around and D’Angelo just has to stand around and say hi to the kids. It made me wish they and Leslie Mann would have been used more throughout the movie. I think there was potential to have it be an extended family vacation, but maybe Chase and D’Angelo weren’t interested in doing more than a cameo.

The writing and directing team of John Francis Daley and Jonathan M. Goldstein (Horrible Bosses) add a few other references and nods to the past four movies to help it feel in touch with the series. You have to include the hot girl in the red car, a manic truck driver, the song “Holiday Road”, and a few other touches. While the film has it’s funny moments, so much of it relies on raunchy, juvenile, bathroom type humor that gets old quickly. It feels a bit amateurish when this series doesn’t really need this. It’s been awhile since I watched the first film but I don’t remember Harold Ramis and John Hughes falling back on this type of humor. It’s as if Daley and Goldstein don’t quite know what to do at times, so they relied on cheap laughs in an attempt to keep the audience engaged. Do they not realize that the audience is probably an older generation that grew up on this series and have moved passed this type of humor? Many of these moments seemed completely pointless and end up being dragged out too long hoping for more laughs. One of the running gags involves Ron Livingston as another competitive pilot to Rusty. His scenes bookend the movie but serve absolutely no purpose.

Vacation is not the worst comedy of the year. There are a quite a few funny moments especially involving the sons played by Skyler Gisondo and Steele Stebbins. The movie is genuinely funny when it’s not trying so hard. There is an awkward family dinner scene that garners some laughs with scene-stealers Keegan-Michael Key and Regina Hall. There are a lot of smart casting choices and ideas, but in the end, there are too many bumps in the road along the way that outshine the good.

Is It Worth Your Trip to the Movies? The original Vacation and Christmas Vacation are a riot no matter how many times you watch them. This one is not.