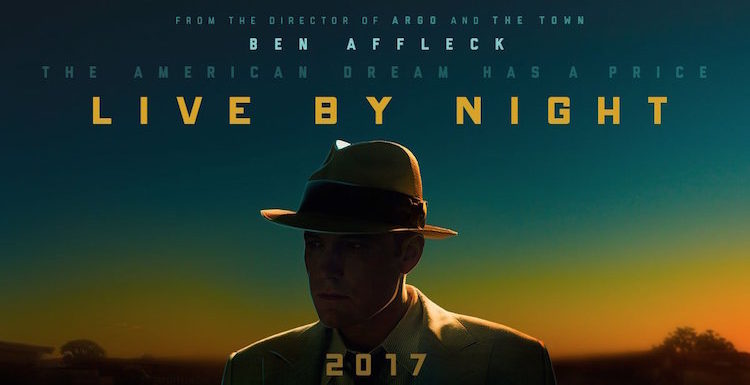 Author Dennis Lehane has had many of his novels grace the big screen like Mystic River, Shutter Island, and the Ben Affleck-directed Gone Baby Gone. The Affleck/Lehane collaboration continues with Live By Night, which is set in the Prohibition Era. As we hear in the opening narration, Joe Coughlin (Affleck) left Boston to become a soldier and came home an outlaw. He’s lived the bank robber life for ten years until it catches up with him. Two different sides, the Italians and the Irish, run the gangster scene in Boston, and Joe finds himself in a passionate affair with the girlfriend (Miller) of Albert White (Glenister). White heads the Irish mob. Maso Pescatore, the leader of the Italian crew finds out about the affair and blackmails Joe with this knowledge into working for their side. Joe’s life gets shaken up when a bank robbery goes awry sending him to jail when three cops are killed. White also happens to find out about the affair, and sure enough, the girlfriend winds up dead.

Upon his release from prison, Joe turns to Maso again to get info on Albert’s current location in order to seek his revenge. From Boston he heads to Tampa to get in on the rum business to drive out Albert’s business there. Joe’s a determined kind of guy and with his new business partner (Messina), they successfully launch a rum company selling it to the local speakeasies. His new venture puts him in negotiations with some local Cubans, including Graciela Corrales (Salada). Don’t be surprised that they get hot and heavy beginning another romantic subplot to this film. The interracial couple does not sit well with some locals bringing out the local chapter of the KKK to take down Joe and the casino he’s trying to build. Joe also finds himself mixed up with the local sheriff (Cooper) and his religious zealot daughter (Fanning) who is also looking to take down the casino.

You’re probably thinking to yourself that this all sounds fairly confusing. Who’s dealing with whom? Who are the crooked bad guys? Do we like Ben Affleck’s character? All are appropriate questions for a film that has about eighteen different subplots and side characters that randomly come into play. Affleck has proven himself a strong director before with The Town and Argo as well as the other Lehane film. Live By Night offers Affleck familiar territory given the issues with bank robberies, Lehane characters, and his Boston roots. He knows how to work with these elements and turn in pulsating movies. Unfortunately, here he seems to be a bit lost as to how to translate this book to the screen.

Affleck has taken on triple doing with directing the film, starring as the lead, and writing the screenplay. It’s a hefty project that may have been too big to fully realize in the time he had in between Batman projects and The Accountant. I’m typically on board the Affleck train as a filmmaker, but he tries too hard to stay true to Lehane’s novel. There’s far too much going on to give the appropriate attention where it’s needed. The first thirty minutes involving the Boston-set bank robberies and the set up with the girlfriend’s death felt choppy as an exposition. I was ready to look past it thinking it was just Affleck trying to cram too much in the prologue to set up his motivation for the rest of the film. What I didn’t realize was that the whole movie would feel like this. Characters come and go so fast and when recognizable actors pop up, you expect more than a one-scene gig. Anthony Michael Hall and Clark Gregg fall victim to this. In general, character development was a struggle as names and backstories are barely given making it all the more difficult to piece this together. It results in typical gangster stereotype performances from these one-off characters.

Part of me suspects Affleck knew this would happen so he wrote himself a ton of narration to fill in the pieces of what’s not being shown on screen. It’s a common but misguided trap in a struggling script where the narration often seems to describe the juicy details that should be what’s actually acted out as opposed to some of the other filler scenes that feel unnecessary.

I began to question if Affleck also miscast himself as the lead. Joe’s a fairly quiet and even keel character. He’s not the kind of gangster with explosive outbursts and radically violent tendencies. Affleck doesn’t turn this interior guy into a intriguing character. He’s full of lies and deceit to get ahead, but Affleck can’t muster the oomph that’s needed. He can’t convey the chemistry needed in the relationships he has with his father (the always great Brendan Gleeson) and his girlfriends (Sienna Miller and Zoe Saldana) to keep the story compelling.

Affleck knows how to make his films look stylish. He has the creative eye that’s needed to at least know what he wants his film to look like even if the script is lacking. He’s partnered with cinematographer Robert Richardson, best known for his work with Martin Scorsese’s Hugo and Quentin Tarantino’s The Hateful Eight. They certainly know how to bring out the Prohibition era and the various climates that come with the Boston, Tampa, and Cuba settings. Live By Night just happens to be a misstep for him as a promising director. It should be noted he only has four films under his belt as a writer/director; the other three all went on to receive Oscar nominations.

Is It Worth Your Trip to the Movies? A movie’s good looks can only carry it so far if the rest of it pales in comparison.