All good things must come to end. Finding the proper send off to a beloved trilogy is tricky. The audience has spent the last two movies invested in classic characters and rich storytelling and you do not want to be let down by some lackluster finale. Audiences will not remember The Return of the Jedi or The Godfather Part III as the best in the series. However, I firmly believe The Lord of the Rings: The Return of the King is the best of that trilogy. Christopher Nolan had his work cut out for him to deliver a satisfying conclusion to his Batman trilogy. The previous entry, The Dark Knight, was pitch perfect and delivered one of the greatest performances seen on screen in the last ten years.

Eight years have passed since the events that ended The Dark Knight. Gotham City seems to be at a peaceful state under the reign of Commissioner Gordon (Oldman) and the passing of the Dent Act. Batman has not been seen since he disappeared the night of Harvey Dent’s death. Bruce Wayne (Bale) has retreated to a secluded life in Wayne Manor over his former luxurious lifestyle. On the eight year anniversary of Dent’s death, the celebration is a set for a spark in the beginning of the downfall of Gotham. Bruce’s encounter with cat burglar Selina Kyle (Hathaway) is one of the first signs that “a storm is coming.” She seems to be after more than the simple necklace that she steals from Bruce.

Selina Kyle assists in the kidnapping of a congressman in an attempt to lure Commissioner Gordon to the scene. Gordon follows the trail into the sewer system to find it has been taken over by Bane (Hardy) and his henchmen. Bane is a bald beefy badass that wears a muzzle over his scarred mouth. Gordon escapes through the water lines but is shot in the process. While hospitalized, he appoints Officer John Blake (Gordon-Levitt) to directly report to him. Blake has a connection to Bruce Wayne as they both lost their parents at a young age. He approaches Bruce and informs him that he has known all along that he is Batman. He believes in the good Batman has done for the city and implores Bruce to don the cape and cowl to stand up to Bane. Bruce’s butler Alfred (Caine) feels differently. He knows the danger and risk involved and does not want to deal with the death of another member of the Wayne family. Bruce ignores Alfred’s pleas and comes to terms with the fact it is time to family don the Batman again. Bane’s reign of power over of Gotham continues. The takeover of Wayne Enterprises Applied Science Division, the attack on the Stock Exchange, and the trapping of all policeman in the tunnel system are all part of Bane’s attempt to take on the wealthiest of Gotham. 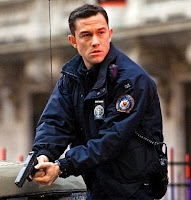 Part of the intriguing concept in Nolan’s Batman Trilogy is that it is set in a very realistic society. The feel of Gotham and its residents is more modern than the dark gothic world or comic book world we’ve seen from previous Batman movies. The themes and events in Nolan’s films ring all too realistic at times. The notions of corruption, anarchy, power of the people, class systems, vigilantes, and the Occupy Movement all ring true to the events in today’s world as well as Gotham. With many comic book movies, it is easy to separate yourself from the fantasy world those characters live in. At one point I had to remember that I was technically watching a movie based on a comic-book as it was all hitting close to home.

It is hard to follow-up Heath Ledger’s Oscar winning performance of the Joker in The Dark Knight. He still remains the best villain of the series. Bane and The Joker are two very different villains with different motivations. Due to his size and muzzled face, he doesn’t quite have the chaotic characteristics that came with The Joker. Tom Hardy gives a fantastic performance as he inhabits a larger than life entity set out for destruction and war. Anne Hathaway steals the movie as the slinky, sexy Selina Kyle. Even though she’s never referred to as Catwoman, she fully embodies the spirit of Catwoman and never lets the leather suit get in her way. She uses the suit and heals to her advantage. You never know exactly what to expect out of Catwoman. Where is she going to pop up, can you trust her, is she good or evil? Hathaway is perfect at keeping her mysterious and not playing her as a stereotype. Joseph Gordon-Levitt also stands out as the brave and strong-willed John Blake. He is not afraid to do what is right and stand up for what he believes in. 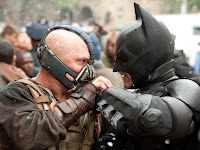 With a running time of over two and a half hours, Nolan and his screenwriting brother Jonathan Nolan have written a long finale to their saga. There is a lot of ground they cover in order to introduce new characters, connect them to the back story, and create a cohesive storyline for all three parts. I think the movie succeeds at feeling like it is its own story while still feeling a part of the overall saga of the rise and fall and rise of Batman that the trilogy has laid out for the audience. Nolan and cinematographer Wally Pfister have shot about 70 minutes of the movie using 70mm IMAX cameras. Many of the aerial shots and the action sequences are the IMAX scenes. The scope and feel of these scenes are breathtaking especially if you can see it at an IMAX theater like the Great Clips IMAX Theater at the Minnesota Zoo. The Dark Knight Rises is a stunning, breathtaking, and completely satisfying end making the Batman trilogy one of the best trilogies ever made.