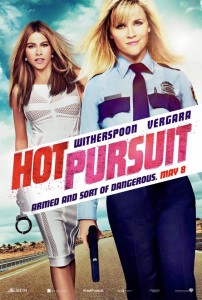 When you go into a movie with such low expectations and you come out laughing, does that make it a good movie? I continue to ask myself this question when I determine how low of a bar to set for the umpteenth buddy cop on the run type movie I’ve seen. In this version we have Reese Witherspoon as Officer Cooper, the inexperienced cop who’s in way over her head. She is a by the books, knows all the police codes, and only talks in police jargon type of officer. She grew up riding in the back of a cop car as her father was a member of the force. This is the only life she knows. Doesn’t this character description already sound familiar?

Her team is closing in on a drug cartel when the head kingpin, Cortez (Cosio), has been arrested. She has been assigned to tag along on picking up one of his henchman and the henchman’s wife, Daniella Riva (Vergara), who plan on testifying against Cortez. A big shootout happens at the Riva compound, but Officer Cooper and Daniella are able to escape the gunmen. Daniella is a tall, buxom brunette compared to Cooper’s short boyish stature. They know that the rest of Cortez’s men along with some crooked cops are now out to get them. They have nothing in common, but in order to survive they have to trust each other and get over the preconceived notions they have against each other.

Like I’ve already mentioned a couple of times in this review, this is by no means a new premise. We continually seem to be graced with these types of movies, which are probably easy, low budget cash cows. I was reminded of Ride Along with Ice Cube and Kevin Hart and The Heat with Melissa McCarthy and Sandra Bullock. I’m sure I am forgetting some others. While both of those movies are about a pair of cops, Hot Pursuit follows one cop and the wife of one of the bad guys. So maybe that’s where they are trying to differentiate themselves. We also have that repeated idea of the cop being the straight-laced, pulls no punches type pitted against the goofy comedic troublemaker. It’s set up very early on that Witherspoon’s character doesn’t understand sarcasm or humor. She’s even the butt of most jokes when other officers claim they’ve “pulled a Cooper.” Luckily screenwriters David Feeney and John Quaintance are able to have some fun with her along the way. There’s a scene that’s given away in the trailer of the getaway car being hit by a truck and exploding in a poof of cocaine. It’s the aftermath of that scene that is pretty hysterical thanks to Witherspoon’s comedic chops.

I found myself laughing harder at that scene than it probably deserved. This very concept kept running through my head over and over throughout the movie. Feeney and Quaintance’s script isn’t all that clever. It’s a standard tried and true formula. I wonder what came first in regards to this movie, the script or the actors? Maybe the script was doctored up once the two leads were cast. Sofia Vergara is playing inside her comfort zone in a role that feels very similar to her role as Gloria on “Modern Family.” There are so many running jokes about her thick accent and using her boobs to attract men. She even attempts an American accent when she’s trying to poke fun at Reese’s character. There is also the repetition of Reese’s height and being confused for a boy, which I don’t particularly see. Let’s not forget about those supposed “twists and turns” where certain characters reveals themselves to be working for the criminals instead of the law. We should come to expect by now that some of the cops are going to be corrupt.

Director Anne Fletcher has made a career of these lighter comedies like The Proposal, The Guilt Trip and 27 Dresses. The Proposal is probably the best one to date. In theory, I shouldn’t like this movie. It’s a predictable paint-by-numbers comedy with two very talented actresses who have done better work in this genre. I can’t tell you how many times I’ve re-watched Reese in Legally Blonde or Election. She pulls double duty again by producing the movie. I don’t feel like most producers would go from Gone Girl to Wild to Hot Pursuit, but maybe she needs to finance her own vehicles. It will be easy to dismiss this movie and look down on Reese and Sofia, but I’m going to just admit flat out that I found it far funnier than I had expected. It is a no-brainer in every sense, yet I couldn’t stop laughing during some scenes. It knows what it sets out to do and accomplishes it all in ninety minutes. Some days you just need these types of movies.

Is It Worth Your Trip to the Movies? If you need to shut your brain off and have a good laugh, grab a cocktail and go along for the adventure.